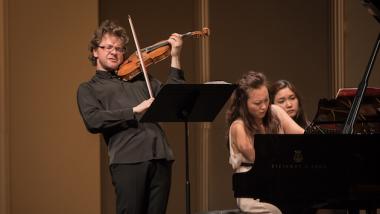 [email protected]’s theme this year is “Russian Reflections,” and its series of Carte Blanche concerts has been planned to explore the Russian repertoire for particular combinations of instruments. Last Sunday’s, on July 24, was a violin and piano recital.

The usual venue, Stent Hall, was closed this year due to construction, and the concert was moved to the larger Menlo-Atherton Center for the Performing Arts, but the event retained a warm, intimate feel. Renowned, young, Russian-born violinist Alexander Sitkovetsky and pianist Wu Qian made their West-Coast debut as a duo at this concert. They put a characteristic stamp on the music in a way Menlo potpourri ensembles often don’t.

Unfortunately for a historical survey, there isn’t much Russian violin and piano music from the 19th century, but the players found a sonata by César Cui. Son of a French officer who’d declined to retreat with Napoleon, Cui was the critic’s voice of the Mighty Handful who dominated Russian nationalistic composition in their day, but his own works are less-well remembered.

Cui’s sonata, in D Major, Op. 84, introduced a feature found in every work on the program, frequent double stops. Cui uses them as his primary method of communicating Russian soul, varied in his slow movement by deep passionate passages on the G string. This works for Cui because of his penchant for rhapsodic, legato melodies, as much in the opening Allegro as in the Andante. Even the finale’s moto perpetuo finds room for legato melody. Sitkovetsky’s strong line and light tone were ideal for this.

Stravinsky’s Suite italienne may be an unfamiliar title, but it was the most easily recognizable music on the program. The suite is simply an arrangement of pieces from the ballet Pulcinella that Stravinsky made to take on tour with a violinist in the 1930s. There were plenty more double stops, of course. Sitkovestsky emphasized the lyric side of Stravinsky’s angular style, even in the fast Tarantella, bringing out the 18th-century origin of the music. As throughout the program, he played with complete control while conveying a casual feeling.

Sitkovetsky described Leonid Desyatnikov, the only living composer on the program, as “a minimalist but with soul.” Desyatnikov is best known for his arrangement of Astor Piazzolla’s Four Seasons of Buenos Aires for violinist Gidon Kremer, to which he added allusions to Vivaldi, Bach, and Pachelbel. The composer affirms his interest in historical reference in the work presented here, also written for Kremer.

Titled Wie der alte Leiermann (Like the Old Organ-Grinder), it’s more than an allusion to Schubert’s “Der Leiermann,” the closing song of Winterreise. Desyatnikov takes the repeated motive from Schubert’s song and makes it sound like a street organ by adding drones in double stops. The piece isn’t actually any more minimalist than Schubert’s song in its repetition of the motive. What it does, besides imitating the organ, is to add soul by transferring the pathetic tragedy of the song from the lyrics to the music. Determined intensity from both players made this a gripping piece.

The concert concluded with Prokofiev’s Violin Sonata No. 1 in F Minor, Op. 80. This came across as an eerie precursor to the Desyatnikov. Lacking typical Prokofiev motor rhythms, it features modernistic querulous language in its fast movements — the Allegro brusco (Brusquely fast) was violent enough to require retuning afterwards — and the same surreal winding melodic effusion as in the Desyatnikov in both slow movements. Wu Qian set off Sitkovetsky’s playing by being more percussive. The sheer length of the work, about half an hour, added to the mesmerizing effect.

For encores, the players offered Alfred Schnittke. “But don’t worry,” Sitkovetsky hastily added. The music was the Minuet and Fugue from his exceedingly civilized Suite in Old Style.

The Prelude Performance concert beforehand featured epic variety of expression from cellist Coleman Itzkoff in Britten’s Sonata in C Major for Cello and Piano written for Mstislav Rostropovich, and a dramatic account of Beethoven’s Op. 95 string quartet from four other young artists from the Chamber Music Institute’s International Program.