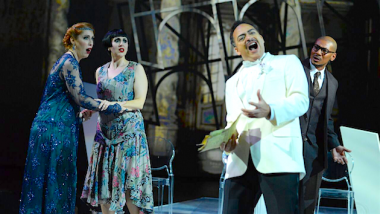 The fate of castaways has long been a source for literary inspiration. Now there’s a new opera that combines the mysterious castaways island of Lost, the elegant upper-class surrealism of Last Year at Marienbad and Exterminating Angel, with a musical score composed by a former rock ’n’ roller— Long Beach Opera’s imaginatively enigmatic production of The Invention of Morel.

Composed by Stewart Copeland (former drummer with The Police), co-written and skillfully directed by Jonathan Moore, the opera, which received its West Coast premiere Saturday at the Beverly O’Neill Theater in Long Beach, is a co-production with Chicago Opera Theater. Based on the 1940 novella by Adolfo Bioy Casares, the opera, like the novel, is a fascinating, psychological hall-of-mirrors.

Considered a classic example of Latin American “magical realism” (in the tradition of Jorge Luis Borges), the novella describes the plight of a political fugitive who finds himself cast away on a tropical island. Seemingly alone, he wanders until he discovers a mysterious building, an abandoned museum, and in its substructure an immense, even more mysterious, machine.

Then, as if they had materialized out of thin air, an elegant group of tuxedo-clad gentlemen and willowy flappers from the 1920s appear. One, who bears a striking resemblance to the silent film star Louise Brooks, instantly becomes the castaway’s love/lust obsession. But every time he sees her, she reacts as if he does not exist.

By the time the mystery is resolved, the novel and the opera raise questions about mortality versus the possibility of virtual immortality; the power of love to bridge the gap of time; and the possibility that the god of science can turn demonic.

Although the novel is barely 100-pages long, it took Moore and Copland three years to produce their final version, which premiered in March, 2017, in Chicago. For Long Beach, the evocative multimedia set design by Alan E. Muraoka with video projections by Adam Flemming and lighting by David Jacques has been reconfigured to fit the thrust stage of the intimate Beverly O’Neill Theater. The stylish 1920s costumes are by Jenny Mannis.

Stewart Copeland has come a long way since his first operatic effort, Holy Blood, Crescent Moon in 1989, when he openly admitted he didn’t know his melisma from his tessitura. In The Invention of Morel he’s clearly leaned to his strength, relying on percussion-driven dance sequences and rhythmic orchestral textures. His writing for strings is less effective and he’s not really a tunesmith. “I discovered I’m not Puccini,” he explained to me. So don’t expect to go out humming any memorable tunes. Copeland’s vocal writing is, however, very effective, harmonically rich, and character driven. But the most brilliant vocal device involves the double casting of the castaway.

Baritone Andrew Wilkowske sings the role of the Fugitive shadowed by his doppelganger, tenor Lee Gregory as the Narrator. It’s a clever invention that allows the character(s) to comment on the action from multiple perspectives— “the influence of the future on the past.” The dual casting also offers Copeland the chance to double the role’s vocal power and dynamics by pairing a lyric tenor with a light baritone.

Jamie Chamberlin brings sultry Vogue Magazine swagger and sharply defined high notes to her performance as the alluring Faustine — the Louise Brooks lookalike who has made a pact with the devil, Morel. Nathan Granner, who created the role of the dapper scientist in Chicago, gives a commanding performance here. Whether he is mad or a genius is left unresolved. His creation does, however, offer a unique way for the Fugitive to “escape.”

All becomes clear in the opera’s climactic scene when Morel informs his guests that they are actually part of an experiment, “living” ghost images, recorded by his infernal machine and destined to dance their way through the same week until the end of time.  The other members of this ultimate shipwreck party include Cedric Berry, Doug Jones, Suzan Hanson and Danielle Marcelle Bond.

Copeland and Moore have created a libretto that does an excellent job of distilling, and in some instances expanding, the characters and thematic thrust of the novel while maintaining its surreal atmosphere. But there are times when the words and music do not form a perfect fit. Moore, a veteran of the Royal Shakespeare Company and Shakespeare’s Globe, provides direction that is consistently adroit in its focus of the drama.

Coproductions like this have definite budgetary advantages for Long Beach Opera and it shows in the quality of the production. The Invention of Morel is a fascinating, intellectually challenging, and musically worthy addition to the repertory of new contemporary operas.

Long Beach Opera Goes Where No Opera Company Has Gone Before

Los Angeles correspondent Jim Farber takes a look at an opera company that is at home away from home, and specializes in reinventing the opera experience.

A moving, masterful production of John Adams’ Death of Klinghoffer raises vital political and religious issues that refuse to die.

An opera premiere about a Marine returning from Iraq is grounded in the experiences of a veteran of the recent war.