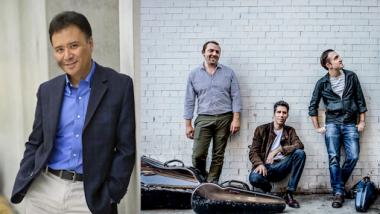 Nakamatsu Steps In With Escher Quartet

What does a string quartet ensemble do when one of its violinists is unavailable for a tour date? The most practical answer is for the remaining three to look through the string trio literature for something else to play.

That’s the solution the Escher Quartet chose before facing a San José Chamber Music Society audience at the Trianon Theatre on Sunday. The piece they picked, the Serenade in C, Op. 10, by Ernst von Dohnányi, is the same one chosen by the St. Lawrence Quartet in a similar pickle some years back. This piece is worth hearing as more than an emergency lifesaver. It’s a tiny gem of a suite by a vastly underrated composer. The serious and dedicated musicians — violinist Adam Barnett-Hart, violist Pierre Lapointe, and cellist Brook Speltz — gave it a passionate, almost gnarly flavor. A touch of sweetness brought contrast to the trio section from the heavy sobriety of its surrounding scherzo.

The three quartet members also had a secret weapon with which to enlarge their repertoire. This was pianist Jon Nakamatsu, who frequently appears in local concert programs. With him, the ensemble was equipped to play piano quartets, and they filled the rest of the concert with two masterworks of that form: Mozart’s Piano Quartet No. 2 in E-flat Major, K. 493, and Brahms’s Piano Quartet No. 1 in G Minor, Op. 25.

The contrast between these two is extreme, and it comes not just from the keys and their implications. Mozart’s previous quartet is a darker work in the same key as the Brahms, G minor, and Brahms immediately followed Op. 25 with a more genial work in A major, Op. 26. It’s the entire milieu of their compositions: the sublime elegance of the classical beauty of Mozart contrasting with the impassioned outpouring of Romantic emotion from Brahms. In a comment in an audience question session after the concert, Speltz observed that in playing such a pairing, the Mozart had to come first. The direction of the evolution of musical style is too strong, and the lightly-handled precision needed for Mozart is hard to recapture immediately after the strong fervor needed for Brahms.

Throughout both works, the performers achieved some marvelous varieties of sound. Nakamatsu’s pianism flashed over the spectrum from heavy, jangly rumbling to trills that bit their way through the accompaniment. His backup harmonies in Mozart’s finale were like soft crunches underneath the string chords, while in Brahms’s Andante his staccato gave an almost unnerving impression of sounding like string pizzicato.

The strings also varied in style as the concert proceeded. Though never plush in the Mozart, the level of grit abrasion was much finer than in the Dohnányi, while in the Brahms they achieved extremes of high passion, lunging sforzandos, rich sonorities, hard digging into the melodies, and touches of portamento sliding.

The variety reached its apex in Brahms’s finale, where each section of the rondo carried a contrasting character. It was thrilling to anticipate what kind of sound would come out next.

Some of the sparkle may have been due to the players being outside their normal comfort zone. String trios and piano quartets are not normal fare for a string quartet ensemble, and possibly Nakamatsu doesn’t play quartets as often as some other chamber music, so the audience’s sense of adventure was, at least to an extent, shared by the musicians as well.

Finesse and Elegance From the Escher Quartet

For a young ensemble, the Escher Quartet plays with exceptional sensitivity and refinement.

A concert by the Escher Quartet at Kohl Mansion offers solemn repertoire sandwiched between more cheerful music for a striking experiment in contrasts.