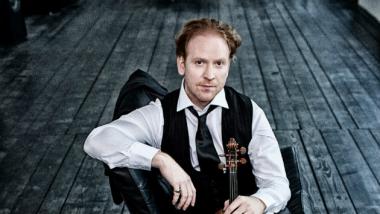 Yehudi Menuhin, the great violinist, conductor, and musical humanitarian – who grew up in San Francisco – was born 100 years ago come April 22. The New Century Chamber Orchestra has been celebrating that centenary by presenting a bouquet of works associated with Menuhin, with Daniel Hope as guest concertmaster and principal soloist. I heard the program on Friday, Feb. 5, at the First United Methodist Church in Palo Alto.

Hope knew Menuhin from childhood on – they met after Hope’s mother was engaged as Menuhin’s secretary – and they often performed together. So it’s personally appropriate that Hope should be the concert’s guide to a Menuhin appreciation. But, though Menuhin was Hope’s mentor, he was never his teacher, and their performing styles are different. Menuhin’s tone was, if anything, overly mellow, while Hope, 42, plays in the crisper, more strident style common in his generation.

What Hope did learn from Menuhin was the importance of a carrying line and warm-hearted expressiveness. These were strongly in evidence in the concert’s centerpiece, Mendelssohn’s other violin concerto, the juvenile one in D Minor. No other composition is more prominently and distinctly associated with Menuhin, who unearthed the work and gave it its first public performance, nearly 130 years after its 1822 composition. This chipper and pointed performance, loaded with melodic charm, banished thoughts of the more famous E Minor Mendelssohn concerto. Instead, it summoned up thoughts of Bach.

This chipper and pointed performance, loaded with melodic charm, banished thoughts of the more famous E Minor Mendelssohn concerto. Instead, it summoned up thoughts of Bach. Particularly in the first half of the concerto, where Hope adopted the Baroque practice of playing along with the first violins in the orchestral passages, Hope and the orchestra gave an earnestly bracing performance in the style of good Bach.

And for some actual good Bach, the concert offered his Concerto in D Minor for two violins, BWV 1043. Associate concertmaster Dawn Harms joined Hope as a soloist for another invigorating performance. The final cap on this facet of the concert was another Baroque concerto for two violins, Vivaldi’s Op. 3, No. 8 in A Minor, with principal second violinist Candace Guirao as the other soloist. It, too, was played with Bachian earnestness rather than Vivaldian gaiety, still lively but more grounded than a typical Vivaldi performance.

Several smaller pieces filled out the concert. Four of these were brief, one-movement violin concertos of recent vintage, three of them written for Menuhin to play or conduct, and the fourth – Unfinished Journey by Bechara el-Khoury – commissioned by Hope in Menuhin’s memory. At 15 minutes, Nostalghia by Toru Takemitsu was by far the longest. All four were hushed and lyrical, each a perfect encapsulation of its composer’s style.

Darf ich … by Arvo Pärt was a delicate piece, full of still harmonics, with a tubular bell regularly ringing in the background. Echorus by Philip Glass churned gently on the surface in the orchestra while two solo violins (Hope and Iris Stone) sung calming melodies over it. Takemitsu offered lightly languid, drooping lines, and el-Khoury put Middle Eastern-style melodic lines for the soloist over held chords. Each was played with deft precision.

Robust heartiness re-emerged in the program’s final piece, an arrangement for string orchestra (plus a little solo violin) of Bartók’s Romanian Folk Dances. Menuhin had no direct connection with this work, as far as I know, but he did play for a delighted Bartók and commissioned a sonata from him. In this concert, the Dances came out as a mixture of stout jollity with strong melody.

Regardless of whether a Menuhin memorial ought to sound like Menuhin’s playing, this concert was a worthy gesture to remember a great violinist and to honor the music that he championed. Hope played with vigor well-tempered by grace, and the orchestra under his direction was a firm yet vivid entity of lively, sparkling steel.