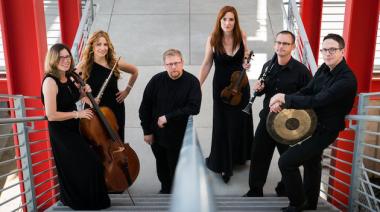 It’s no longer a local secret that new music groups are bursting out all over Los Angeles, and Brightwork is trying to step up its game in order to stand out in the crowd. Founded by pianist Aron Kallay, this sextet of accomplished pros from L.A. orchestras and studios out for adventure and fun just became a nonprofit, and they are planning out-of-town residencies in Pittsburgh next February and Paris in March.

Monk Space is a funky, shoebox-shaped, brick-lined room discreetly located behind an anonymous-looking door on 2nd St. just off Western Ave. in Koreatown. (It was supposedly once a speakeasy and I can believe it). There were about 65 seats — clearly the room can hold more if needed — plus an outdoor courtyard where refreshments were served, including a chocolate “birthday cake” to commemorate the launch. The acoustics are, shall we say, tricky. It’s a very live room where amplification is not needed, where acoustic instruments are in your face no matter where you sit, and operatic-sized voices can boom overpoweringly.

All but one of the eight pieces on the program (no premieres this time) were compact opuses ranging from four to eight minutes in length that made their points succinctly and departed without taxing the attention span. The outlier was Russell Steinberg’s absorbing 15-minute monodrama Rucksack, in which the text by Holocaust survivor Juliane Heyman contrasts her journey to America just steps ahead of the Nazis with a hike in the Poconos not long after she got here.

Steinberg juxtaposes the two storylines by having his mezzo-soprano (Geeta Novotny) mostly speak the text of Heyman’s odyssey from her native Danzig (modern Gdansk) through Switzerland, Belgium, and France, and sing when she is in America. The score faithfully follows the narrative — lyrical and pretty when describing the Pocono landscape, militant and jarring when flashing back to Europe under the Nazis.

As conducted by the composer and sung and spoken, with occasional vehemence, by Novotny, Rucksack resonated in several ways. There was the irony of Heyman being mistakenly apprehended by police in the Poconos after all she had been through in Europe. And when Novotny spoke of Heyman’s feelings of seeing the Statue of Liberty and all that it meant at the time, you couldn’t help but think of the current abuse of children along the Mexican border and what America may mean to immigrants today.

The full sextet opened the evening with Alyssa Weinberg’s Refracted, with the strings making abrasive scratching effects against dissonant winds, eventually working themselves into a frenzy. Timo Andres’s Trade Secrets for violin, cello, flute, and percussion was placed next as a mostly attractive, peaceful foil. The original electric-bass part for Molly Joyce’s Lost And Found was re-scored for cello, permitting Parkins to thump away pizzicato on a rhythmic pattern which the whole sextet eventually picked up. Takuma Itoh’s Parallel Divergence for sextet concluded the concert in a high-tension, trilling whirlwind that ran out of gas only at the end.

Elsewhere, there were unusual duos to be heard — like an exploration of the vibrating combined sonorities of a bass clarinet and percussion (vibraphone, woodblocks, gongs) in Nick Terry’s Modicum’s Semblance, and a rather comic staccato pairing of cello and prepared piano in Amy Williams’s stop/yield, with Kallay creating drones by striking a piano string with a quarter. And A.J. McCaffrey’s Murmurations consisted of dissonant comments and flurries for clarinet and piano of variable interest.

There were no program notes, and only brief talks before some of the pieces. Our ears were mostly on their own, and the effort was often rewarded.

The Claremont Trio Showcases Commissions on Queen of Hearts