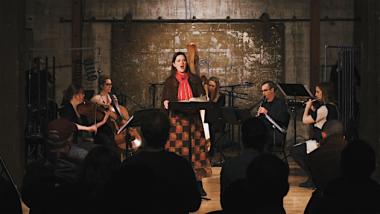 This is new-music concert series wasteLAnd’s sixth season, and last night’s program bristled with full-throated sound. I was thankful to be challenged by each work; there was no soft-pedaling here. The world premiere of the night, a song cycle by wasteLAnd’s artistic director Nicholas Deyoe, was mirrored by a raucous performance of Luciano Berio’s Folk Songs, both pieces featuring soprano Stephanie Aston.

Deyoe’s song cycle, titled And I am responsible for having hands, is a setting of five poems by Allison Carter, all of which have something to do with love and something to do with breakfast. The poems were crunchy, uneven in emotional tone, and paired well with Deyoe’s sound palette, which is often markedly (heroically? bravely?) heterogenous. Written for flutes (including bass flute and piccolo), cello, and harp, the musical gestures hung in space like objects on a mobile, the musicians spinning in and out of interaction with each other. The harp, often a problematic instrument because of its strong connection with sugar plum fairies, was embraced for both its awkward sweetness and horror-movie sound effects — like the slow scraping of nails along bass strings. Deyoe knows Aston’s voice inside and out, and he let her hover multiple times on the same high note, the kind that stops your breath in your chest.

Aston’s voice is like fine, strong thread — she does not envelop you, but cuts through. In Chaya Czernowin’s trio for soprano, mezzo-soprano, and bass flute, Manoalchadia, Aston sputtered, groaned, and shimmered in rich combination with viper strikes from the bass flute and the warm presence of mezzo-soprano Leslie Leytham.

The two singers joined each other again for the final work, Master of Disguises, by wasteLand’s featured composer Katherine Young. Flanked by Marta Tiesenga on tenor saxophone and Brian Walsh on bass clarinet, the stoic Aston and Leyham appeared through the texture only in the silences between saxophone and clarinet wails. All the while, the singers poked and prodded amplified tape players, stopping, rewinding, ejecting, and playing the tapes. For a time I wondered what was so menacing about the tape players? And, should tape players be menacing? But just as my interest began to flatten, the piece coalesced, as the singers began to perform a sonic magic trick. As Aston sang a melody of only the vowels of the words in the text, Leyham dryly pronounced only the consonants of the words. In combination, I knew it was English, but only by the hair standing on the back of my neck.

There were two postcard pieces last evening — works whose entire score, sometimes only verbal directions, fits on the back of a postcard. The first was a patient work by Liza Lim called Love Letter. Percussionist Dustin Donahue performed with quiet diligence, rapping, scraping, and brushing an amplified frame drum. There was ritualistic breadth in Donahue’s performance, a sensuousness to the time he took pushing a coarse shoe brush into the center of the drum, sounding like a bed of twigs breaking under a slow, massive weight.

The second postcard piece was James Tenney’s Cellogram for solo cello, performed by Ashley Walters. Entirely made of the slow sliding of one pitch against another, it was with sincere new-music-junkie enjoyment that I felt the crashing and gelling of pitches. However, the piece followed a fairly clear set of rules, and didn’t deviate from those rules much. I was disappointed to not be surprised — I don’t know, I guess I want more mystery in my life.

It is definitely wild, though, that an instrument designed in the 1700s can sound exactly like a plane flying overhead.

Katabasis Offers a Descent to the Classical Greek Underworld

It’s one helluva musical journey at the Getty Villa.