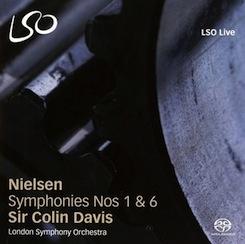 Music listeners around 1900 must have been wondering, “Whither the symphony?” Brahms, Bruckner, and Tchaikovsky were all lately dead, Dvořák had moved on to other things, and, in its home city of Vienna, the symphony was being taken in new, emotionally intense, and harmonically outré directions by composers like Gustav Mahler and Franz Schmidt. I wonder how many listeners attentive to the state of the symphony were aware of two young composers far away to the north who, in the previous decade, had each written a First Symphony that was harmonically consonant, but pointed in entirely different new adventurous directions than the Viennese were exploring.

One was the mist-drenched First by Jean Sibelius of Finland, and the other was the opening work on this new recording by Sir Colin Davis and the London Symphony Orchestra, the boundlessly energetic First by Carl Nielsen of Denmark. At the age of 26 when he composed the work in 1891-1892, Nielsen wrote music that felt as if he’d just completed two stages of a triathlon and was raring to go for the third. The three faster movements of this work bounce around like an India-rubber ball, both in raw energy and in the invigorating way Nielsen shifts around among keys. This symphony in G minor begins with a chord of C major, and it ends in C major too. Along the way, both keys and many others play a kind of harmonic see-saw game, with sudden and invigorating modulations.

Invigorating, too, is the way he uses repeated notes to build tension, reaching its climax in the scherzo where 16 repetitions of a forte “snap” make for one of the most astonishingly exciting moments in orchestral music. Harmonically and thematically, the symphony resembles Dvořák in his more energetic moods, with a strong mixture of Brahms. Even at this date, though, Nielsen was already a typically 20th-century composer in his terseness and lack of sentimentality.

Thirty years later, much had changed. Cool neo-classicism had replaced late Romanticism as the fashionable musical style, World War I had seared its way across the landscape, and Europe felt like a much different place. Though Denmark had escaped the full depredations of the war, Carl Nielsen had been marked by it. His post-war music feels like it suffers from post-traumatic stress disorder. The energy is still there, but it’s hidden and transmuted in strange, quirky ways. His pre-war Second and Third Symphonies had built on the model of the First with increasing maturity. Then his Fourth of 1916 began to break up that optimistic mood, followed by the unforgettably manic-depressive Fifth, a picture of an orchestra in harmonic civil war and striving to find peace. Then, in 1924-1925, at the age of 59, Nielsen penned his final symphony, the Sixth, the second work on this album.

It’s different from any of its predecessors: a little querulous, more than a little enigmatic, featuring lots of winds clucking away in conversation. The second movement “Humoreske” — hardly a scherzo — is for winds and percussion only. There’s an alarming moment in the first movement (starting at 8:07 on this recording) where the music dramatically suffers the composer’s recent heart attack. Melodies are cramped and angular, and whenever the music starts to get insouciant, something else will cut it off as if to say, “Be serious here.” The theme-and-variations finale, beginning with a long and not at all comic bassoon solo, played expressively by Bram Van Sambeek, comes by its end to be at peace with itself — and to end with one final bassoon blat, a funny one this time.

Naturally, as a San Francisco partisan, I wouldn’t be without Herbert Blomstedt’s magnificent recording of these same two symphonies with the SFS. There’s room for more than one good performance in the world, though, and this one, recorded live at concerts last year at the Barbican, is well worth the hearing. Davis takes Nielsen in a weightier manner than Blomstedt does, an approach that serves the Sixth better than it does the First. The brittleness and instrumental color of the Sixth come out clearly, more so than in the SFS recording, while the smoother textures of Davis’ First tend to droop a little where Blomstedt shimmers warmly.

This conducting style is matched by the distinctive sound quality of this recording. I’ve been to a concert at the Barbican once, and I don’t remember the hall sounding quite as damp and heavy as it comes across in this recording of the First. Piercing top notes in the climaxes come across as slightly incongruous. In this aspect, also, the Sixth works better here: There’s bite in the winds and percussion, and even in the strings, notably the violas in the first movement.

The engineering and editing of live recordings has long since reached the point where, apart from what sounds like some bits of conductorial humming in both slow movements, extraneous noises are entirely absent (there’s no applause on this disc either). What’s left is the excitement of a live performance. Whatever performance a listener prefers, Nielsen is a gem in music.