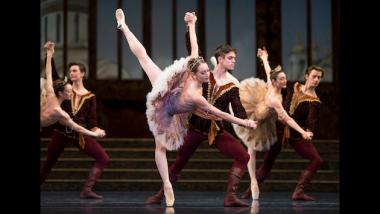 Helgi Tomasson’s The Sleeping Beauty for his San Francisco Ballet has reawakened this season, with a few changes in décor and some major changes in personnel. The results often dazzle.

Artistic Director Tomasson’s version of the Marius Petipa/Peter Ilyich Tchaikovsky classic, which premiered in 1990 (a hundred years after its Mariinsky Theater premiere), is slightly leaner than the original, with brisker plotline and minus a few dances, but still runs nearly three hours — time well spent. And this year’s version has more opulent costumes (the old ones were nice; these are knockouts) and third-act set (now adorned with a more awesome royal staircase), both courtesy of the Royal Danish Ballet’s production, which, like the San Francisco Ballet’s, was designed by the brilliant Jens-Jacob Worsaae (1946-1994).

And then there are the dancers. This is something of a watershed season. Some of the most notable principal dancers have retired (though Sarah Van Patten, by the bye, is back from maternity leave), and the ranks include more than a few new hires and recent promotions. That extends, too, to soloists and corps. It’s impossible to point to any major shift in artistic impetus, but the combination of new gang and old guard merits a season of close and pleasurable attention.

Tuesday night’s season opener, conducted by Martin West, had as Princess Aurora Sasha de Sola, her debut in the role, partnered by Carlo di Lanno as Prince Desiré. She was just promoted to principal and di Lanno in 2016. De Sola, from Florida, trained at the Kirov Academy of Ballet and became a San Francisco Ballet apprentice in 2006; Di Lanno, from Italy, danced with La Scala Ballet and Staatsballett Berlin before joining the company as a soloist in 2014. De Sola credits a video of former Mariinsky ballerina Larisa Lezhnina as her inspiration for Aurora; coincidentally, Lezhnina coached the company for this production, as did Lola de Avila, former S.F. Ballet School associate director.

Lezhnina and De Sola physically resemble each other, and it’s readily apparent that De Sola has taken in Lezhnina’s intriguing mixture of innate calm and bravura vitality. Her performance was technically stunning. Time, luck, and hard work will determine whether she becomes a great ballerina, but she’s off to a great start.

Di Lanno was an impeccable, musical, and princely partner, with exciting elevation in his leaps and precision in his landings, and terrific arms and shoulders too.

Only a company this good and this big can field a terrific Sleeping Beauty, with different ballerinas in different roles every performance. Not only are the principal dancers (which included Van Patten as a fine, if initially nervous, Lilac Fairy and character dancer Anita Paciotti as the spectacularly nasty Fairy of Darkness) superb, but so are the soloists, particularly the Fairies; the corps women, shown to warm advantage in the Garland Dance; and the six, charming little S.F. Ballet School students. And we haven’t even mentioned the gracious nymphs of the vision scene, green and ghostly and precisely in formation, or Act III’s superb character dances, most memorably Wei Wang’s high-flying Bluebird, opposite Dores André’s Enchanted Princess.

Such problems as there were seemed to stem from anxiety — overall, despite its spot-on presentation, the show felt a bit chilly. De Sola was the first to unbend, and by the time of Aurora’s wedding, she was smiling as though lit from within. Di Lanno eventually cracked a tiny grin.

The jitters are perfectly understandable, for truth be told, Sleeping Beauty is overall perhaps the hairiest and scariest of the classical repertoire. The footwork, the adagios, the allegros, the jumps, the leaps, the turns, the social dances, the character roles — the ballet poses one delightful (to the audience!) challenge after another. Couple that with a company currently, like most troupes, steeped in neoclassical and exploratory works (such as the company’s upcoming Unbound Festival). That can create a certain crisis of confidence, and telling the dancers, “You look so much nicer when you smile!” just isn’t going to cut it. One can’t exactly relax over a steaming cup of Petipa. But let us hope that as Beauty moves on (it ends Feb. 4), everybody begins to realize they’ve got this. Because dammit, they do.

A “Nut” to Remember

San Francisco Ballet makes the past a present.

The new collaboration with librettist Gene Scheer debuts in Houston this week and will greet the Bay Area holiday crowd in 2018.