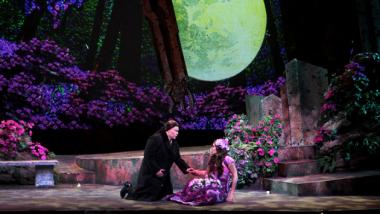 Gounod's Faust opened at West Bay Opera in Palo Alto on Friday. The ambitious new production does not lack for ideas. Director Ragnar Conde's staging is cluttered and does not help a sparse chorus sound cohesive. The use of video projections on an upstage screen is effective in changing the scenes. Three silent minions assist Méphistophélès, pushing the narrative forward. Though inelegant, it certainly is not boring.

Set in 2057, this dystopian vision of the future brings together a dizzying array of time periods. The viewer is bombarded by images — often animated — ranging from neon lucha libre masks to depictions of neurons firing. Backdrops can be startlingly bizarre. A full moon appears in the middle of a garden, and a Gothic cathedral deteriorates before our eyes.

The costumes had both medieval and contemporary details, such as laced bodices over airy gowns with asymmetrical hemlines. Marguerite's attire was the most successful, following the disintegration of the character's fortunes. She begins Act I in a gown festooned with large artificial purple and white flowers. By Act II the flowers are gone, the dress is the same shape, but is made of purple chiffon. In the end she is wearing faded rags, but the garment is clearly of the same pattern. Bass Kevin Thompson was an impressive Méphistophélès. His robust voice is beautifully resonant, with a controlled vibrato. His acting was focused and convincing.

The principals did not disappoint. Bass Kevin Thompson was an impressive Méphistophélès. His robust voice is beautifully resonant, with a controlled vibrato. His acting was focused and convincing.

Likewise, Elizabeth Zharoff was the very embodiment of Marguerite. Her dark-toned soprano is appealing and smooth. She was able to convey both youthful innocence and utter despair. She sounded great in her back-to-back arias in Act II, Scene 2. Her voice never flagged in "Ah! je ris de me voir."

As Faust, tenor James Callon has a less than imposing physicality, but his agreeable voice has nice heft to it. Aside from one high note he struggled for at the end of Act I, Scene 2, he sang well. His final duet with Zharoff ("Oui, c'est toi que j'aime") was particularly fine.

Jose Luis Moscovich led a small and eager orchestra. Francis Griffen's orchestral reduction maintains the beauty of piece, and the splendor of the music came through despite the inexact playing. A low point came during "Il était un roi de Thulé," when the strings were exposed and seemed to miss a cue. The chorus also was inconsistent and often hazy. "Gloire immortelle de nos aïeux" was distinct and clear. Perhaps it was a simple case of opening night jitters. Everyone pulled together by the end, and it was a moving performance without a dull moment.