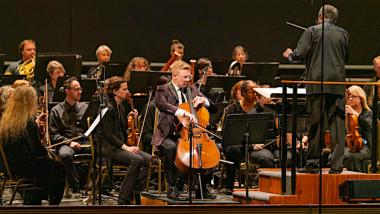 In an unforeseen irony, the memorial to the tragic conflagration occurred as California residents reeled from the effects of more recent fires and the destruction of the town of Paradise. Many concert-goers and musicians arrived at Oakland’s Paramount Theatre wearing smoke masks against an almost apocalyptic haze over the Bay Area.

The event was, as one might expect, dark. At the opening, literally: the stage lights dimmed so drastically that soprano Patricia Westley sang in the dark for the first phrases of Bernstein’s “Take Care of This House.” The song appeared first in 1600 Pennsylvania Avenue, an unsuccessful 1976 Bernstein musical. Westley’s beautiful rendition, with a deep velvety tone, was accompanied by a video projected above the stage, naming and picturing the 36 people who died at Ghost Ship. In this context, the song — which originally concerned the historical White House — became a secular prayer for attentiveness to many such “houses,” including the Ghost Ship and more broadly, the lives of creative artists. It may well have occurred to many listeners that a prayer for mindfulness in the present White House would not be amiss.

The challenges of the symphony’s Ghost Ship Requiem project were evident even here at the outset: Can one use classical, symphonic music, with its particular traditions and sonorities, to commemorate a tragedy that primarily impacted an explicitly non-traditional artistic environment? Can one speak of an event like the Ghost Ship fire in terms of a prayer for a restful afterlife (“Requiem”) when the tragedy is still so raw in many hearts, and its causes and implications remain so politically fraught?

The newly-commissioned cello concerto went some distance to address these issues, and if it did not entirely succeed in answering them, made a substantial contribution to the ongoing history of the disaster. Richard Marriott, known principally for work for cinema, composed this long piece in a film-music style full of rich and varied emotional outbursts. The music laid out an ambitious three movement trajectory from celebration (the creative enterprise of the Ghost Ship), re-enactment (the chaos and terror of the fire itself), and lament.

The cello solo was played with spirited intensity by the accomplished young performer Matthew Linaman, who teaches at San Francisco Conservatory. Linaman’s cello was closely miked and heavily amplified, making his performance all the more impressive, as his every gesture was transparently audible over the large orchestra. A unifying feature of the concerto was a series of call-and-response passages in the horns and trombones, placing the soloist — and the tragedy — in a sonic space of broadly echoing, almost oceanic distances (in an apparent nod to the nautical implications of the name Ghost Ship).

For all its earnest passion, however, the concerto seemed uncertain in intention. While the program notes acknowledged the complexity of commemorating such a recent and complicated event, the music itself was too eclectic and episodic to deliver that complexity. Sometimes uplifting, sometimes jaunty, sometimes elegiac, it seemed both to delve into the tragedy and to pull away from it, reverting to a romanticized lyricism. The solo cello itself seemed overladen with dramatic roles — among them, passion, terror, anger, and sorrow.

In contrast, the Brahms Requiem evinces a clear intention of consolation in the face of loss. Unlike earlier requiem Masses, it does not set the Dies Irae (Day of wrath) poem. For Brahms, death is not terrifying but sorrowful, and his music is a familiar comfort for those who grieve, imagining a blessed rest for the dead.

The Oakland Symphony, under the baton of Music Director Michael Morgan, played the Requiem with assurance and a good deal of nuance, nailing both its pianissimos (hard to sustain in the acoustics of the vast Paramount Theatre) and its energetic crescendos. Horns and woodwinds were notably responsive, and the violins expertly managed Brahms’s rapid, loud, arpeggiated passages. The violas were gorgeous, leading the deep sonority of the violin-free first movement.

As soloist, Patricia Westley soared tenderly and clearly above the chorus with her message of consolation. Baritone soloist Robert Sims brought a deep umber tone to his solos, though his voice was at times overpowered by the orchestra and chorus. Particularly beautiful was “Herr, lehre doch mich” (Lord, make me to know my end), and the chorus amply matched Sims’s melancholy intensity in its following elegy, “Denn alles Fleisch es ist wie Gras” (For all flesh is as grass).

The chorus was well-prepared, managing the Requiem’s tricky rhythms and complicated counterpoint, and responding well to the score’s intricate dynamics. Bolstering the Oakland Symphony Chorus with additional male singers (in this case, the Oakland Gay Men’s Chorus) balanced the larger number of women singers in the symphony chorus. In some faster sections the chorus lagged behind, perhaps because they were placed at a considerable distance from the conductor and strings, far back on the big Paramount stage. That placement did not help the acoustic either, at least from my seat in the 11th row of the balcony, where the chorus sounded muffled and lacking in presence.

The program as a whole lasted more than two hours and (understandably) the chorus seemed to lose some of its energy and intonation in the final movements. Smoke, and the general unsettled quality of life in the Bay Area this week, may well have played a part.

There is no obvious end quick end to any disaster, Ghost Ship or Camp Fire, and no quick fix for the problems that caused it. The Oakland Symphony’s project, though necessarily incomplete, was a significant milestone in the ongoing effort to deal with these tragedies. In the Requiem, Brahms used a Biblical quotation that encapsulates the struggles and possibilities of such communal rethinkings: “Denn wir haben hier keine bleibende Statt, sondern die zukünftige suchen wir” (For here we have no continuing city, but we seek one to come).