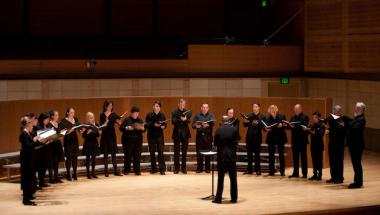 San Francisco’s Volti chamber choir has embarked on a year-long pilgrimage of sorts. In February 2018, the choir will perform British composer Joby Talbot’s 2005 Path of Miracles in a staged and choregraphed production at Grace Cathedral. The work is an hour-long choral cycle inspired by the Camino de Santiago, a series of medieval pilgrimage routes running across Western Europe that lead to St. James the Apostle’s enshrined remains at the Cathedral of Santiago de Compostela in northwest Spain.

In a March 4 concert at St. Mark’s Lutheran Church in San Francisco, Director Robert Geary led Volti in a workshop performance of the first movement from Talbot’s piece; much like the stops along the Camino de Santiago, the choir will sing individual movements from the work in concerts leading up to the complete performance.

Volti made the first leg of this holy journey on Saturday, with the “Roncesvalles” movement from Path of Miracles. It’s named for a tiny village in northeast Spain where many pilgrims set out on their trek. Much of the piece resembles the Spanish devotional music of the Middle Ages that was sung along the Camino — there’s a lilting tune that recurs in call-and-response form as the singers, representing pilgrims, recount the tale of Saint James to one another in Greek, Latin, Spanish, Basque, French, German, and English.

Several of the 17 members of the choir were featured in short solos, notably bass-baritone Joel Chapman. In a moment of nocturnal meditation, over a hazy sustained chord in the basses and a starry constellation of crotales cymbals, Chapman sang a plaintive prayer to Saint James for safe passage to Santiago. He has a warm, robust bass that cuts across the rest of the ensemble, even when he’s not soloing.

This build-up finally led to a dramatic bursting forth: The men quickly shot upward in a rocketing glissando and, joined by the women, exploded into a radiant tutti chord. It was so incredibly loud that my ears were buzzing. I was reminded of Moses, whose face glowed after witnessing only the backside of God’s glory. It was a sublime and awe-inspiring musical moment; I half expected little beams of light to come shooting out from my face (or at least, out of my ears).

The combination of Asian traditional music with medieval European idioms, which was so effective in the Talbot, also found its way into a new work by American-based, Filipino composer Robin Estrada. Estrada — who first collaborated with Volti while still a Ph.D. student at Berkeley — drew on both Gregorian chant and Indonesian gamelan for Caeli enarrant, presented in its world premiere.

In his onstage introduction to the piece, Estrada noted that he took as his inspiration the golden rule of Matthew 7:12, which also appears in various other moral codes. For Estrada, this reaffirmation of the commonsense “do unto others” attitude seems a necessity in today’s heated social and political climate — both in the United States and as well as in the Philippines. By blending gamelan with medieval chant, Estrada said that he hoped to convey the possibility of coexistence, depicting what he called a “happy community” in the piece.

The choir successfully teased out the themes of interconnectedness running through Caeli enarrant. They began singing a responsorial chant setting of Psalm 18 (“The heavens are telling the glory of God”), which gave way to a seemingly random babble as the choir recited the same text with staggered entrances and at different rates. Slowly, the music came together again and the final section saw a return to a unison chant melody — inflected with the Indonesian slendro scale — for Christ’s statement of the golden rule, from the Sermon on the Mount. It was a moving musical expression of altruism and interdependence in an era of deep divisions.

The program also included a performance of Ingrid Stözel’s  Into Being (2011), based on the Sanskrit Mantra “So ham ham sa,” an onomatopoetic evocation of breathing. Its sweet harmonies offered a pleasant concert opening. Žibuoklė Martinaitytė’s The Blue of Distance (2010) on the other hand, is a truly innovative work. It was the second time I’ve heard Volti perform it (reviewed here), and I was again impressed by subtle shifts in color achieved in this static, wordless piece through slowly morphing vowel sounds as well as extended vocal techniques such as ululation and nose-pinching (it’s not as silly as it sounds).

The ensemble has this work well under its belt and will record it this week for a future release. György Ligeti’s  Lux Aeterna (1966), however, needed more attention. The composition was likely an inspiration for the Martinaitytė — both deal with changes in texture and timbre. But while the choir lent the dense harmonies in The Blue of Distance a dreamy and iridescent quality, Ligeti’s even thicker cluster chords sounded plain out of tune. It also seemed like conductor Geary had trouble communicating with the singers. But Volti will have a second crack at the work when they perform it at Bard Music West’s all-Ligeti festival next Saturday, March 18.