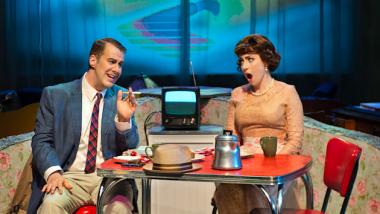 The reliably unpredictable Opera Parallèle concocted a smartly conceived double-bill for the company’s February 14–18 run at SFJAZZ. In juxtaposing composer Jake Heggie and librettist Terrence McNally’s 2005 musical monologue At the Statue of Venus with Leonard Bernstein’s Trouble in Tahiti (1952), the production delivered a mordant Valentine’s weekend meditation on the poignant elusiveness of romantic love.

By casting the same singer to play Heggie and McNally’s anxious woman waiting for a blind date and Bernstein’s semidesperate suburban housewife, the point was made explicit. Careful what you wish for you as a longing single. You may end up in a marriage as lonely as this one. There was musical kinship in the two pieces as well, both in the composers’ flair for setting vernacular speech in jazz-inflected rhythms and the effusions of lyrical yearning.

The two operas would have made a perfectly satisfactory if relatively brief evening. Opera Parallèle, which never does anything by half measure, wasn’t about to settle for that. By opening with both a Prélude of West Side Story themes and an Overture of Charles Ives’s The Unanswered Question (with dancer Steffi Cheong as a stone-colored but very mobile Statue of Venus), the show’s collaborators framed the double-bill with speculations on the fissures of art and life, illusion and reality.

A gaggle of art lovers roamed a balcony gallery during the West Side medley. An ingeniously devised film, which incorporated the actual singers into the eponymous Trouble in Tahiti movie scene, gave the heroine’s cinematic memories a comically surreal spin. Even as a relatively stationary object in the Heggie piece, Cheong’s Statue couldn’t resist getting into the act, eagerly pointing out potential men in the museum as Rose’s blind date who keeps her in suspense to the end.

And there was more. In using music from Bernstein’s most famous score in the Prélude and then projecting black-and-white footage of him lecturing during intermission (largely inaudible as audience members returned to their seats and the orchestra tuned up), the show offered a multipanel tribute to the polymathic composer in his centennial year.

The impulse to do more extended to Brian Staufenbiel’s staging. With a four-section turntable that never seemed to stop spinning and two different projection screens busy with 1950s magazine ads and a stark, oddly sci-fi image of little houses dropping to earth as if from outer space, this Tahiti was theatrically overwrought. So, in a different way, was Amy Seiwert’s agitated choreography for the Statue, which seemed at odds with Ives’s tremulous Question. An uneasy musical performance of this delicate 1908 work didn’t help.

The sum effect was that of trying too hard, as if the production needed to make a case for itself. The musical and dramatic assets would have come across more effectively without all the special pleading.

Mezzo-soprano Abigail Levis (Renée Rapier at other performances) sang with glittering vocal and emotional precision on opening night. Baritone Eugene Brancoveanu (who shared the role with Kyle Albertson) was sturdy but rather stiff in his Tahiti turn as a self-absorbed but heartsick husband. A deft and stylish trio of soprano Krista Wigle, tenor Andres Ramirez, and baritone Bradley Kynard served as Bernstein’s scat-singing chorus. With the exception of the Ives, conductor Nicole Paiement elicited a strong and sensual performance from the orchestra,

was the more substantial piece on the program, a seven-scene opera that earns renewed admiration on subsequent hearings. The composer’s own brooding libretto and tightly rhymed lyrics provide the complementary strengths of this emotionally suggestive, leanly rendered work. It begins in a nasty marital spat, full of clipped musical phrases that suddenly open into achingly harmonized oceans of despair. There’s a murmurous irony in Dinah’s line, “A woman needs so little.”

There’s nothing finer in the piece than “There is a Garden,” which blooms out of Dinah’s session with her therapist. Levis gave the number’s aspirational intervals a quietly vaulting, bittersweet spaciousness. Moments later, in one of the evening’s most simply staged scenes, she and Brancoveanu sheltered on opposite corners of the stage to wonder why each of them had lied to the other about having a lunch date. This little duet of deceit took wing. That wished-for garden, as Trouble in Tahiti comes to reveal, is a marital Eden long ago abandoned.

If Statue has less exalted aims, it accomplishes its purposes with some style and wit. Awaiting a “5-ish” museum rendezvous with a man she’s never seen, Rose moves from fretting about the slacks she’s chosen to wear to imagining how handsome (or even straight) her prospective suitor might be to reflecting on her life as a “lucky child” who was loved by her parents. Levis was funny, present in the moment, and all too cognizant of her innocent, vanished past. Her diction and musical delivery had the willed clarity of a woman trying as hard as she can to hold on to hope for the future. A high note near the end seemed about to shatter even as Levis lofted it.

Missing out on a blind date is one thing. The Tahiti marriage to come, in Levis’s quietly anguished performance, is an entirely deeper and more perilous matter.

The small company comes up trumps with a compelling production of the modern-day masterpiece.