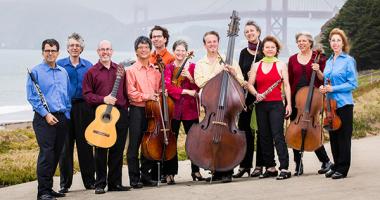 Five works with Orpheus as their theme was a good excuse for some musical potpourri. On Saturday at the Berkeley Hillside Club, the Left Coast Chamber Ensemble performed works in vastly different styles, written over a period of more than 400 years.

LCCE is known as a new music group, but Baroque techniques brought to life the snippets from Monteverdi’s L’Orfeo (written in 1607, it’s considered the oldest opera currently in the repertoire). Raucous energy with razor-sharp tonguing from flutist Stacey Pelinka made the Toccata, in this arrangement for quintet, sound nearly as full as the real thing. Flowing vibrato and fuller sound brought us forward in time for Gluck’s 1762 opera Orfeo ed Euridice. It’s rare that the classical style, often simply the default, is put into relief, but here, LCCE made the century-and-a-half’s worth of musical changes felt.

The program swung wildly in another direction with Luiz Bonfá’s bossa nova song Manhã de Carnaval (also known as Black Orpheus). It’s the kind of song that often pads a shorter half of a program, but was newly intriguing in this peculiar trio arrangement, understated and almost melancholy, by LCCE’s managing director Nick Benavides.

In her solo piano work Rhapsody Toccata (performed on Saturday by guest Katy Luo), Chiayu Hsu — the 2017 winner of Left Coast’s composition competition — mixes impressionist harmonies, Bartók and Ligeti, in climbing chromatic thirds with the blues. I’d rather watch a really good improviser. On the other hand, though Aida Shirazi, a Ph.D. student at UC Davis, uses themes from Monteverdi in her quartet Vestiges, the music feels totally new.

At first, the glimpses are so brief that I hardly catch them. As the short piece (for flute, violin, viola, and cello) unfolds, these motifs, distorted as if by memory and changing musical values, layer in a way that seemingly augments the number of players. Wide vibrato, flautando bowing, and semiharmonics obscure the pitches; when more prolonged melodic fragments call out, they seem to come from the beyond, like Death and the Maiden, reaching out from the middle of Black Angels. Beautiful sounds combine in new ways, and other sounds seem entirely unfamiliar. Vestiges is unusually creative; I left wanting more.

I sometimes wonder why composers of conservative song cycles feel compelled to put forth more work basically Romantic in form and technique. Eric Moe’s Sonnets to Orpheus, though, earns its way.

First, the text is glorious. The substantial 1997 work uses Rilke poetry, in stunning English translation by Stephen Mitchell, and everything is text-painted: pours and stream are cascading piano scales; large leaps illustrate space, and the birds, of course, cry. These examples, however, never feel obvious or overeager, like a student composer reaching for that extra credit (Moe is a professor at University of Pittsburgh). More than a mere colorist, Moe captures the tone of each text’s world, and the shattering shifts that occur inside.

The first song is declamatory and, with its dotted rhythms and urgent leaps, like an overture. The stop-start fourth movement (“Wait ... that tastes good ... But already it’s gone.”), cuts short its soaring melodies at practically the most joyful moment. Scordatura tuning in the cello increases the depth of the seventh song; tenderness, resignation, and fragility are just a few of the other moods Moe creates.

None of this could be done without soprano Nikki Einfeld, who lithely steered the sudden shifts in range and tone. With her at the center, everything felt intuitive. The rest of the ensemble was Andrea Plesnarski, oboe; Anna Presler and Ilana Thomas, violins; Phyllis Kamrin, viola; Tanya Tomkins, cello; and Karen Rosenak, piano. Matilda Hofman conducted.

The Left Coast Chamber Ensemble premieres three new works this weekend on the theme of childhood in what promises to be a real variety show.