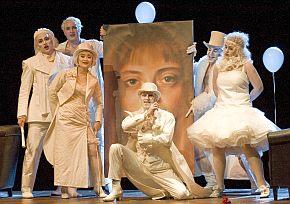 Jason Victor Serinus on September 30, 2008
If you only know Erich Wolfgang Korngold's Die tote Stadt (The dead city) from its unforgettably haunting duet, "Gluck, das mir verblieb" (Joy, sent from above), prepare to be stunned. That gorgeous melody, sometimes referred to as "Marietta's lied," is one of the few moments of lyrical repose in an otherwise astoundingly lush, powerhouse score in which protagonists and orchestra vie for first place in both volume and impact.

Die tote Stadt is several parts Richard Strauss, more than a pinch of Puccini, plus a generous helping of pre-Hitler German decadence, all packed into a quasi-Freudian dreamscape that might cause some buttoned-up therapists to cross their legs. Guilty pleasure? Perhaps. An opera designed to leave all but the most uptight snobs among us cheering? Absolutely.

An Opera to Send the Head Reeling

Since this local premiere by the San Francisco Opera comes a mere 87 years after the opera debuted at the Metropolitan, the plot is likely unfamiliar. As the opera begins, we find Paul in a very large room, obsessed with the memory of his dead wife, Marie. Having moved to Bruges, Belgium, he has transformed his mostly bare apartment, perhaps more mentally than physically, into a "church of the past." Such "religious" icons as a portrait of his dead wife — in this production, increasingly multiplying portraits — and a glass case that holds her hair reflect his deranged mental state. Paul's inability to function in the present moment is punctuated only by visits from his housekeeper Brigitta and friend Frank, who attempt to draw him back to reality. Into all this unwittingly wanders Marietta, a dancer in a theater production on tour in Bruges, who bears an uncanny resemblance to Marie. Although Paul can, on some limited level, relate to Marietta as her own person, he increasingly hallucinates, until he loses all ability to distinguish morbid fantasy from reality. The haunting subtleties and ambiguities of Britten's opera A Turn of the Screw have no place in Die tote Stadt. What follows includes a pantomime scene with Pierrot reminiscent of Richard Strauss' Ariadne auf Naxos, a religious procession complete with crucifixion and resurrection, and Marietta's murder by strangulation. Everything is animated by music that is increasingly agitated and impassioned. The haunting first act duet, "Gluck, das mir verblieb," seems, in retrospect, reminiscent of Tosca's "Vissi d'arte" (I lived for art): a brief moment of inward reflection in an otherwise histrionically and melodically extroverted, over-the-top score. If the libretto, by Korngold father and son, is ultimately too overdone to be considered a work of art, the music, by the son, is something else. Call it tawdry, call it schlock, call it derivative; call it what you will. It's music whose countless dramatic climaxes, each more powerful than the other, roll over you faster than Errol Flynn could draw his sword. And in the hands of conductor Donald Runnicles, the San Francisco Opera Orchestra, and a cast that should make General Director David Gockley justifiably proud, it picks you up, knocks you down, and leaves you begging for more.

A Triumph of Casting and Singing

To begin with the singing, German tenor Torsten Kerl (portraying Paul) is a wonder whose ringing voice — tailor-made for Strauss, Wagner, and the like — is capable of both masculine heft and a touch of sweetness. Solid throughout the range, with not a hint of forced tone, his instrument sears with passion. Although Runnicles left him few opportunities to employ the Tauber-like falsetto he brought to the 2001 Opéra National du Rhin production of the opera (on Arthaus Musik DVD), he seems capable of caressing a note as easily as hurling it across the footlights. American soprano Emily Magee (Marietta/Marie), whose list of roles also includes much Wagner and Strauss, seems incarnated to sing/play Marietta. The body is flexible, with feet capable of a dancer's pointe; the face and figure are lovely; and the voice is extremely generous. Although she may lack (at least on Tuesday's opening night) the melting sweetness and heart-tugging sentiment that make the 1924 recording of "Gluck, das mir verblieb" by Lotte Lehmann and Richard Tauber (as well as the more recent, extremely slow solo rendition by Beverly Sills) a standard-bearer, her ability to swell on high in passage after passage inspires awe. If she did not seize the heart with her Act 3 aria "Der Erste, der Lieb' mich gelehrt" (The first man who taught me love), she certainly exhibited the secure high C that Lehmann lacked, and knocked us out in the process. Balancing these two powerhouses, the towering former Adler Fellow baritone Lucas Meachem (Frank, Fritz) brought Thomas Hampson–like plushness and empathetic tone to his role. His effusively romantic "Mein Sehnen, mein Wähnen" (My yearning, my dreaming), one of the few places where the conductor tempered the volume enough to allow the true beauty of Meachem's instrument to shine through, was a high point. Although he has beefed up since his Schwabacher recital last February, he still cuts a winning figure onstage, enough so that you may wonder if it's a stand-in who's doing that bare-chested dancing. Mezzo-soprano and Adler fellow Katharine Tier (as Brigitta) also excelled. It's a mostly thankless part, given her identity as a devoted, close-collared servant, but her one opportunity to soar at the top of the range suggests major potential. Runnicles was, well, Runnicles. He's fabulous in climaxes, fearless in his command of waves of sound, but often stronger on the yang than the yin. (I can hear the angry letters coming.) The flexibility of tempo that Szell brought to Lehmann and Tauber, the welcome yielding that touches the heart, was less in evidence than the glory of it all. But glorious it was. As for Willy Decker's stunning production, with its stage within a stage; debut director Meisje Hummel's unquestionable mastery of movement; and Wolfgang Göbbel's striking lighting, volumes could be written. The less said, though, the more likely you will be carried away by the effects. These words merely hint at what's in store: Don't miss Die tote Stadt.