The Pacifica Quartet has amassed a large discography for Chicago’s Cedille label over the last 20 years — most notably an impressive complete Shostakovich quartet cycle with fellow Soviet composers of the period as discmates. The complete quartets of polar opposites Felix Mendelssohn and Elliott Carter (the latter on Naxos) also figure in their catalogue (they proved their mettle at UCLA in 2003 by daring to play all of the Carters in one exhilarating evening). Now the foursome checks in with a Cedille CD of three contemporary works by three distinguished living composers, all of whom happen to be women. 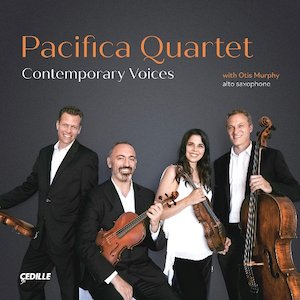 title Glitter, Doom, Shards, Memory (2012-2013) — otherwise known as her String Quartet No. 3 — comes from an exhibition of paintings from the Weimar Republic era, “Glitter and Doom: German Portraits From the 1920s.” The first movement, “That Which Happened” opens as if Ran is starting to tell a story, but the apparent storyline gives way to anguished and dissonant passages, spare fragments, and shards of sound in a morose mood, perhaps more attuned to what happened after Weimar. The composer’s admonition “do not forget” suggests that.

From Jennifer Higdon comes Voices, the earliest work here (1993) — three continuously-played movements that are supposed to journey, in the composer’s words, “from dark to light, from manic and frenzied to calm and quiet,” or “from specific to vague.”  That pretty much sums it up; the opening movement “Blitz” contains plenty of jagged, atonal scampering and swirling while the two remaining movements settle into soothing tonality until some of the earlier angst returns just before the end.

For a change of texture, saxophonist Otis Murphy joins the Pacifica for Ellen Taaffe Zwilich’s Quintet for Alto Saxophone and String Quartet (2007), the most approachable piece of the three. The alto sax operates like a cool opaque light shining through the more abrasive sounds of the strings. A few jazz scales flit by during the unison runs in the second and third movements, there are also references to Stravinsky and the alto sax sounds as if it is going to break into the warmth of Honegger’s Pastorale d’ete until it sounds a minor note, upon which Zwilich then goes her own way.

The Ran is a first recording, the Higdon and Zwilich pieces previously had at least one recording apiece. I cannot honestly say that any of them strike me as masterworks, but it’s good that they are gathered here in such assured, immaculately-recorded performances.

The Pacifica Quartet communicate so strongly during a performance, they’re as engaging as the music.

Composer Jennifer Higdon may have come late to the world of classical music (she famously didn’t start playing a musical instrument until she was in her teens), but she has certainly made up for any lost time. She holds the Milton L. Rock Chair in Composition Studies at the Curtis Institute of Music in Philadelphia, she’s in demand as a composer for symphonies and festivals, and her most famous work, blue cathedral, has become an often-performed staple of modern classical music. She returns to the Bay Area in August for the Cabrillo Festival of Contemporary Music, where two of her pieces will be featured.

The composer Ellen Taaffe Zwilich has to feel crazy in love with a proposed work, otherwise she doesn’t do it.