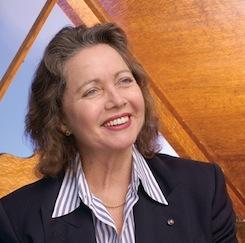 Ellen Taaffe Zwilich (b. 1939) was a violinist before she was a composer. She played in the American Symphony Orchestra under Leopold Stokowski in the late 1960s and early ’70s, and, a couple of YouTube interviews and a recent pleasant phone conversation later, it’s quite obvious that her experience as a performer was so profound that it still pervades every aspect of her being as a composer. “I am an instrumentalist; I love instruments,” she says.

She has never written an opera (“in fact, not much vocal music of any kind”), and her love of musical instruments has given birth to a relatively large number of solo concertos for instruments that are usually underrepresented in that department: bassoon, bass trombone, trumpet and oboe, to name a few.

Zwilich’s latest work is a more “conventional” concerto for violin, written for the New Century Chamber Orchestra’s (NCCO) 20th anniversary season. The four-movement concerto is titled Commedia dell’Arte, and is based on characters from the namesake 16th-century Italian form of theater: Arlecchino, the comic servant; Colombina, the flirtatious mistress; Capitano, the showy and cowardly Captain; followed by a Cadenza and Finale to bring it all together.

When you compose for a specific soloist, does it help to know the person? In how far do you do a “custom” job?

It helps to know someone’s musical personality. For me it is the inspiration I get, knowing that I am writing for this particular person. A commission is not like tailoring a suit, making it fit for just one individual.

How long have you known Nadja Salerno-Sonnenberg?

We didn’t really get acquainted until this commission, maybe two years ago. They asked me to write a piece, and the first thing I thought of was a violin concerto for Nadja. I was very excited to do the project, and we met for lunch to discuss the whole thing and get acquainted. But I have been familiar with her playing for quite a number of years.

And you immediately thought: I want to write something for her?

What kind of vibe did you get from Nadja?

I wanted to write something that was a bravura violin concerto, but also dramatic — because that is what she is. Nadja is a very dramatic player. It lit my fire. I never thought I would do a piece like the Commedia dell’Arte, but it just felt right. I gave Nadja a list of the stock characters to see which ones seemed musically most interesting to her. She and I came up with almost the same list.

Can you describe your composition process? What happens before that first note goes down on paper?

Well, that first note doesn’t go down for quite a while. I do a lot of preplanning and prethinking, in all kinds of ways: abstract, concrete, and sometimes even almost balletic. And then, at one moment, I know I am ready to write the piece. I compose at my desk, not at the piano. Some composers write at the piano and then orchestrate, but that’s not for me. I need to write directly “on” the instruments. And I always write on full score, so I have a sense of the orchestra and the soloist right there in front of me.

The bassoon is an instrument that I do not play at all. I feel ashamed to say this [giggling gently], but I don’t know why anybody would want to. It is a very temperamental instrument: all wood and cork. You have to make your own reeds, and it doesn’t like any kind of weather [more giggles]. But I love the sound of it. My interest is in the karma, the soul of the instrument, and I wanted to learn as much as I could, listen to the sound and talk to the soloist I was writing for. Then one day, I woke up and I felt that if I opened my mouth, a bassoon sound would come out. And I knew I was ready to go! That concerto has actually had quite a nice life since then. I believe there have been three performances in the last month, with different soloists.

Do you still play the violin?

[Laughs, slightly embarrassed] The problem with the violin is that you have to practice. I played through all the string parts in this new piece, just to get the feel of it. But, oh gosh, it was an unpleasant experience [laughs harder]. I just don’t sound good.

I don’t do anything that I am not madly in love with.

When that first note finally gets written, do you have the piece complete in your head?

Sometimes the music wants to do something different than what I had planned. I will always throw away the plan and go with the music.

Could you say that, in a way, it overtakes you?

Well, it does — but I work hard to let it do that. I go into every aspect I can think of, so that at one point it does overtake me. I work on commission and I really make my living as a composer, but I don’t do anything that I am not madly in love with. If someone offers me a very nice commission to do something that doesn’t get me really excited, I say “no.”

What have you said no to in the past?

A few years back, I had a wonderful opportunity to write an opera, and it was very hard to turn down. But I just wasn’t in love with it. I knew I wasn’t going to wake up all excited in the morning and think: I get to write opera today. So I said no.

Many composers would jump at the chance to write something as big and dramatic as an opera.

My most joyous moment is when I feel “It is the performers’ piece now, not mine.”

No, because it is always changing. And so far, it hasn’t come up with “opera” [laughs].

Can you describe “music”?

The interesting thing about music is that it involves every aspect of the human being. It involves thinking and planning and relationships and memories and anticipation; it involves the feelings, the heart and the soul — and the gut, if you will; there is a kinesthetic sense to it. … And if that is missing, I am not interested.

What do you do when you are not working?

I love to swim; I am a pretty good swimmer. And I love to take pictures, particularly of people. That started when I noticed that photographs of composers were often old, and old-fashioned, usually taken years earlier, in some kind of studio with a halo light behind them. One of the first composers I photographed was György Kurtág in Hungary. Later I took pictures of Roger Sessions and Elliot Carter. I sort of try to capture the flavor of a person.

I have no idea; sometimes, material just pops up. I remember one moment when I said to myself: I am on vacation, I just had a wonderful swim in the Adriatic, I am going to lie here … under this tree … not think of anything — and the opening of my Second String Quartet came to me, whether I wanted it, or not!

And you cannot turn that off …

No, you can’t. The important thing is to recognize what is real — the difference between just the beginning of something and a real idea. I “get” a lot of my music when I wake up in the morning; suddenly there is something that wasn’t there before.

How do you prepare for the premiere of a new piece, like Commedia dell’Arte?

I take my eraser to the first rehearsal and I am open to tweaking or fixing anything that arises — usually a small thing, like a dynamic or an articulation. Nadja and I have already been over the solo part. My most joyous moment is when I feel “It is the performers’ piece now, not mine.” I happen to have written it, but it belongs to them. The joy of finishing a piece is tempered by a little bit of loss; you have been living with something and now it is gone. When performers take it over and make it theirs, I can finally sit back and listen. I have a very good musical imagination, but there is nothing like the moment when people are breathing life into your composition and the air is vibrating and [sigh], I can’t wait.