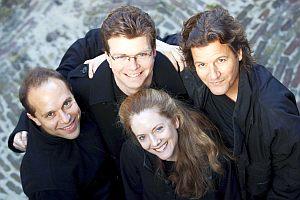 David Bratman on April 7, 2009
Many string quartet concerts are programmed as miniature histories of the medium. Few, though, can have had a chronological spread so wide as the St. Lawrence String Quartet’s Stanford Lively Arts concert at Dinkelspiel Auditorium on Sunday. It jumped 240 years without even an intermission, from Joseph Haydn’s Quartet in E-flat, Op. 9, No. 2 — one of the earliest mature quartets by the composer who, as much as anyone, invented the form — to John Adams' simply-titled String Quartet, a brand-new masterpiece for the repertoire, completed last summer.

The last time the St. Lawrence played an Adams quartet for Stanford Lively Arts was 18 months ago, and SFCV was there. So was Adams, who was so taken with their performance of his John’s Book of Alleged Dances, and even more with their Beethoven Op. 132, that he undertook to write a new work especially for them. Lively Arts co-commissioned it along with the Juilliard School in New York (where it received its premiere in January) and the Banff Centre in Alberta (where the St. Lawrence players plan to record it this fall).

What most impressed Adams in the St. Lawrence performance, he said in an interview, was the players' “rhythmic integrity.” And what attracted him to the string quartet genre, he said while introducing his new work at the concert, was the greater level of ensemble precision achievable with a chamber ensemble than with the limited rehearsal time available with an orchestra or an opera company.

Out of the Quartet Lab

The result is that Adams’ String Quartet becomes almost a laboratory of extreme rhythmic and ensemble effects made to challenge the most talented performers. If the work has a flaw, it’s that it tumbles from one striking sound to another to another, without always giving a sense of how these fit together in the service of a larger, coherent argument. The composer or the performers are suddenly struck with an idea, and say, “Oh, let’s try this now.”

Behind all this diversity, the most consistent pattern was the sense of a centrifugal force. Fast, running background motions were set up from which new ideas would gradually emerge, slowly spinning off. This idea itself probably emerged gradually in Adams’ mind from the slowly shifting cell patterns of classical minimalism.

The music begins with a rather minimalist-style ostinato. From out of this, Christopher Costanza’s cello gives a jazzy pizzicato, Geoff Nuttall’s violin squeaks, and Lesley Robertson’s viola growls. Later, we hear jumping, tumbling triplets, and irregular chitterings with a rhythmic pattern reminiscent of Morse code. Each of these also spins off melodies and other patterns.

Occasional slow sections provide an eerie contrast, though they’re built up in the same way. Chitterings are gradually replaced by long slow strokes in each instrument, one by one. Once they’ve finished the transition, the strokes are at first all together. Then they slowly separate. The effect is of the instruments slowly passing each other on lonely journeys through space.

Sounds like a dull intellectual exercise for the benefit of the performers, doesn’t it? Yet it isn’t, and it could never be one with Adams. He employs ideas for musical ends, not theoretical ones. This music must have been an exciting challenge to play, yet the work was made to be listened to. All the shifting patterns were clearly laid out, and were as fun, and as engrossing, to hear as they must have been to perform. All the labor that the composer and the St. Lawrence players put into planning and rehearsing the quartet was well invested in a fine, glinty performance of this kaleidoscopic work.

Rather like Adams' crystallizing a new style out of minimalism, Haydn’s quartet catches the classical style slowly emerging out of the Baroque. Much of the E-flat Quartet is constructed as a concerto for solo violin accompanied by string trio, though every once in a while it shifts to pairs — the two violins together, or violin with cello. Nuttall, in the first violin part, very gently brought out the expressive possibilities of his role, strategically lagging behind his colleagues ever so slightly, dragging them along with him in the trio section of the minuet, and restraining himself from overindulgence with highly crisp articulation, especially in his trills.

After intermission, Antonín Dvořák’s Quartet in G Major, Op. 106, neatly split the time difference between Haydn and Adams. It dates from 1895, almost exactly halfway between the two. It’s one of Dvořák’s last chamber works, perhaps less popular than his other mature quartets, yet in some ways the most masterly of them all, particularly the first two movements. As with the Adams, this was a centrifugal performance. With Scott St. John playing first violin, the St. Lawrence Quartet brought out the separate voices, each with its own tone and character, rather than melding together.

The program notes described Dvořák’s first movement as “positive” and “joyous.” I don’t know where the writers get these ideas. It’s a hard, gripping, serious-minded movement, and the style of this performance emphasized that. The St. Lawrence approach played down the aching beauty that some quartets find in the slow movement, but as if in compensation made a delightful whirl out of the (sometimes less than inspired) scherzo. The one thing the St. Lawrence players couldn’t do was erase the feeling that the finale is perhaps a bit too garrulous.

There was still time for a little more Dvořák as an encore: No. 9 from his series of short pieces for quartet, Cypresses — one more opportunity for an exquisite viola solo from Robertson.