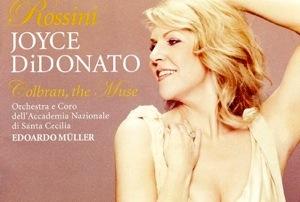 Passion and Fireworks From Joyce DiDonato

By the time she completes the first astounding 50-second musical statement of “D’Amor al dolce impero” (To the sweet rule of love), mezzo-soprano Joyce DiDonato has delivered her calling card. The soaring high notes, seamless runs, and imperious declarations of the impossibly demanding second-act finale of Gioachino Rossini’s opera Armida establish, in no uncertain terms, that she’s a major artist at the height of her powers.

The first of seven demanding arias, on a disc packed with enough flawless trills and high climaxes to satisfy the most demanding opera lover, the Armida tour de force introduces DiDonato’s long-awaited Rossini recital. Filled with music inspired by the composer’s Spanish muse and eventual wife, Isabella Colbran, this CD (from EMI Classics) contains selections that are typically sung by high-coloratura sopranos. But, as Philip Gossett points out in his extremely literate liner notes, Colbran’s voice seems to have spanned both mezzo and soprano registers. Hence, mezzos such as Frederica von Stade and Cecilia Bartoli, as well as sopranos such as Montserrat Caballé who do not extend above high C, have also embraced Colbran’s repertoire.

Although the demands that Colbran placed on her voice led to her premature decline — she seems to have peaked around the age of 30, as did Maria Callas — DiDonato is going strong at 40. Her control is formidable in florid gems such as “Tanti affetti in tal momento” (So many emotions at such a moment) from La donna del lago and “Bel raggio lusinghier” (A sweet alluring gleam) from Semiramide. The variations, which DiDonato mostly composed herself, are extremely elaborate in ways that recall artists of a much earlier era. Listen to her perfect high trill 90 seconds into “Fra il padre” (Between my father), to the rapid final section (or cabaletta) of “Tanti affetti,” and the force with which she races through the showpiece’s final runs. If this isn’t great singing, what is?

One thing DiDonato does not offer, however, is melting sweetness. (Neither did Callas, though she offered in its stead a touching fragility that doesn’t seem to be DiDonato’s strong point.) As beautifully as she sings “Giusto ciel, in tal periglio” (Just Gods, in so great a peril) from Maometto II, she doesn’t tear at the heart. Nor is the start of the “Willow Song” from Otello as moving as others on disc.

But fasten your seatbelt when DiDonato gets going, as in the finale to Act 3 of Armida (which is set in an encampment of crusaders outside Jerusalem). As cymbals clatter, percussion thunders, and lines such as “Destroy everything here, everything” (Distrutto tutto qui resti, tutto) are hurled off, you may find yourself shouting “Brava!” at your loudspeakers. At some point in her San Francisco Performances–sponsored recital on Nov. 16, the corn-fed “Diva from Kansas” will likely take your breath away. This is one take-no-prisoners mezzo.