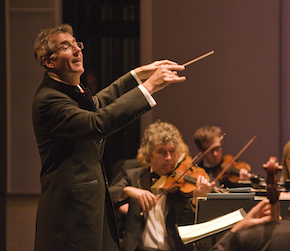 There never has been and never will be another masterpiece even comparable to Bach’s Passion According to St. Matthew and the renewal of it in Sunday’s Carmel Bach Festival’s performance in the Carmel Sunset Center made it alive once more, immediate. It realized the drama’s interaction of the then and the now, of the witnesses and participants in the Passion and, onstage and off, the witnesses and worshippers today. In turn, to effect that depends on finding the heart in music that is as deeply probing as any that Bach ever wrote.

The generator was Paul Goodwin, festival artistic director, from the inspired casting and the preparation to the performance. Andrew Megill’s finely trained Festival Chorale of 28 professional singers, divided into the Passion’s two choruses, starred in its multiple roles of soldiers, mobs, worshippers. The balance was true, advantaged by the light, fine sonority of the orchestra’s period string instruments.

The two central figures were remarkable. Rufus Mȕller is evidently a “career” Evangelist, singing the recitative narrative in a ringing, clear tenor and from memory, like an opera role. The Jesus was Dashon Burton, a towering presence, the musical brevity of the role enlarged by the depth and richness of his bass-baritone.

The four soloists were excellent, soprano Dominique Labelle singing those compelling arias like “Blute nur” (Bleed on, dear heart) with rich, true tone and deep feeling. Tenor Aaron Sheehan, bright in voice, was convincing in his singing of “Geduld, Geduld” (Patience, patience) with fine accompaniment on viola da gamba. Peter Harvey enlarged the baritone role by his direct, expressive projection, notably in the final aria, “Mache dich, mein Herze, rein” (Make thyself clean, my heart) which seemed to lift the spirit as he sang. Robin Blaze, countertenor, sang as pure, focused, and musically as could be desired (save only some unwanted force here and there). While not suggesting any shortcoming, I much prefer a contralto for those arias, period inauthenticity notwithstanding, definitely for the ineffably stirring “Erbarme dich” (Have mercy). The concertmaster Peter Hanson played the serene obbligato to Blaze’s rendition.

Goodwin, a tall, long-limbed man, conducts big, the breadth and sweep of grand gestures exaggerating the expressiveness desired. Properly to be sure, the musicians did not literally mind, did not respond on that scale, but gave the generous and tasteful musicality that he really intended. Goodwin is an intense, precise, and score-dedicated conductor withal. His shaping of the four grand choruses that stand at the work’s corners (and of the 15 chorales, five of them repeats of “O Haupt voll Blut und Wunden,” the Passion chorale Bach used as a telling refrain) was beautiful and tasteful.

Saturday night, in Carmel’s Sunset Center home, the Bach Festival launched its 77th season with one other of Bach’s greatest works, the Magnificat, BWV 243. While the St. Matthew Passion, was his grandest vision, the closest he came to writing an opera, the Magnificat, reveals more of Bach’s humanity, humor, and personality than any other of his works.

While the performance shaped by Goodwin did not particularly illuminate Bach’s personal touches, they are inescapable nonetheless. There is his joke of setting the final “As it was in the beginning” with the same music that started the work. My favorite comes at the end of the “Esurientes” movement, where the rich being sent away empty is pictorialized by one final, single note, plunk. Another is the piling up of generation on generation with the literal musical piling on in layers of insistent repetition of the word “every” (omnes), although Goodwin sped the tempo faster than the generations could accumulate.

By this, his fourth year as director, the British musician has moved the orchestra far along towards period instrument practice, a change long resisted by the Festival’s supporters. This conversion was significantly effective in the strings and the use of the valveless Baroque trumpet. The woodwinds were still using modern instruments. The sound of the more buoyant, lighter, period string playing helped balances with the Festival Chorale, which was again excellent.

By this, his fourth year as director, the British musician has moved the orchestra far along towards period instrument practice, a change long resisted by the Festival’s supporters.

Another twist was Goodwin’s interpolating some of the original Christmas version of this early work (BWV 243a, in E-Flat, 1723) into the later D major setting. The insertions included the chorale motet “Von Himmel Hoch,” the jubilant chorus “Freut euch und jubiliert,” and the duet aria for soprano and bass, “Virga Jesse floruit”. The additional insertion of a choral “Nunc dimittis” (Lord, now lettest thou thy servant depart in peace) — following the Anglican usage — was here a new piece commissioned by the Festival, a lovely composition by Caroline Shaw. The lines fanned out beautifully, incorporating the shape note tune “Awake,awake, arise.” It is harmonically true, the sonority fine.

Labelle, noted for her early music performances, was the soprano soloist, her tone velvety, rich. Clara Rottsolk, the second soprano and soloist in the “Et exultavit,” sang in a light voice with an edge to it. Countertenor Robin Blaze sang clear and fine the music usually assigned to an alto. Aaron Sheehan, the tenor, gave a bright, intense account of the pictorially florid “Deposuit,” and Peter Harvey was firm and resolute in his solo, “Quia fecit mihi magna” (Because he has done great things for me.)

Goodwin drew a strong response from his forces with fine attention to nuance and detail and concern for the impact for the work entire.

This was balanced in the second half by Vivaldi’s best-known and most frequently performed choral-orchestral work, the Gloria (in excelsis Deo) in D, RV 589. To the Festival Chorale was added 43 volunteer singers and the performance was solid, vigorous, crisp in articulation, propelled by rhythmic verve. Goodwin included a theorbo (archlute) in the orchestra, adding a nice, pointed coloring of the harmonies.

There was one other, delightful touch in the program, just before intermission: Carl Philipp Emanuel Bach’s Symphony No 1 in D (Wq 183/1) from his third set of symphonies. It manifests the liveliest and most adventurous qualities of his writing, swift, unexpected, and bold harmonic changes, brilliant writing for strings. The three movements are connected, a speedy Presto following the charming Largo, which featured the flutes. This was a lovely way to celebrate CPE Bach’s birth tricentennial.