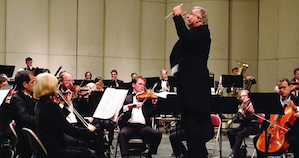 For Peninsula, The Business of Music Must Go On

What does an orchestra do if it suddenly learns, weeks before the start of a new season, that its entire endowment and operating funds have vanished from its bank accounts? If it’s the Peninsula Symphony — which faced this horrific discovery early this month — the board members, orchestra musicians, and even the singers of the Masterworks Chorale hold quick whip-rounds and raise some $150,000, enough to fund about half the season, including an extensive educational program.

And then the show goes on. It opened on Friday at the new Samuel Johnson, Jr. Performing Arts Center at Capuchino High School in San Bruno. The Masterworks Chorale, directed by Bryan Baker, participated in this concert, which was conducted by Peninsula Symphony Music Director Mitchell Sardou Klein, with one work led by Assistant Conductor Nathaniel Berman.

An outside observer can’t imagine how the musicians were feeling about the state of their institution, or how that might have affected their performances. What I can say is that the program, consisting of five works presenting various aspects of festive grandeur, felt more formal than celebratory. The opening work, Brahms’ Academic Festival Overture, was, in this performance, an academic overture rather than a festive one, serious and dogged in the typical Brahms manner. That set the keynote for the evening. The musical atmosphere was one of caution and a watchful steadiness. For the most part, the music came out as competent, if not inspired, with one piece falling below and one rising above that level.

The orchestra’s approach was matched by the mode of soloist John O’Conor in Grieg’s Piano Concerto. This is a festive display concerto, intended for the pianist to wow the audience both with musical fireworks and by shaking the long hair male pianists affected in those days. O’Conor has the strong, florid build of an Irish bar bruiser — he is from Ireland, at least — and, being largely bald with a tight crewcut on the rest of his head, he has no long locks to shake.

He didn’t try, either literally or figuratively. He played slowly, with distinct articulation, as if determined not to put a finger wrong (not that this saved him from a normal ration of the flubs that flesh is heir to). While it wasn’t exactly dull, it had less flair, or even enthusiasm, than I would have thought possible to achieve in the Grieg concerto.

O’Conor reappeared, with just a little more zip, in the concert’s finale, Beethoveen’s Choral Fantasy, Op. 80. This misbegotten mishmash of a piano concerto and a first draft for the Ninth Symphony’s “Ode to Joy” almost demands to be played with bad taste. It didn’t receive any here: sobriety was the word. The Masterworks Chorale sang in both this and the preceding work, Handel’s coronation anthem Zadok the Priest. Necessarily stuck deep in the auditorium’s cavernous stage, the Chorale found its inherently excellent and lusty singing regrettably weakened, even coarsened, by its distance from the audience and the vastness of its surroundings.

Crown Imperial, a patriotic potboiler of a march, received a delightfully crisp, robust, and vigorous performance under Berman’s direction.

The Chorale’s inability to thunder at this range tended to spoil the effect of Zadok, as did some problems with the orchestra. Otherwise in excellent technical form throughout the concert, the players in this work were either under-rehearsed or just having problems with Baroque intonation and phrasing.

Where the orchestra really shone was in the one remaining piece, William Walton’s Crown Imperial. Possibly chosen to pair with Zadok because it, too, was written for a British royal coronation, 210 years later, this patriotic potboiler of a march received a delightfully crisp, robust, and vigorous performance under Berman’s direction. Berman gave particular care to shaping swells and crescendos in an imaginative and consistent manner well-suited to bringing out the snap and the grandeur in this otherwise undistinguished work.

Typically of the breed of school auditoriums, the Johnson Center is big, wide, and flat in general shape. Seated in a back-middle row, I found that the space gave a tangy air to wind chords, with middle lines sticking out in unusual ways. This had its strongest effect in the opening phrases of Zadok, where a prominence to the winds actually increased the music’s Handelian flavor above most performances.