Percussive Beats and Feats at Menlo

Percussionist Christopher Froh has been an invaluable presence in the Bay Area for over a decade, enlivening the contemporary music scene with performances of exceptional musicality and virtuosity. For Saturday’s [email protected] Menlo program at the Menlo-Atherton Center for the Performing Arts, he was joined by two equally capable New York-based colleagues, Ayano Kataoka and Ian Rosenbaum, for a superlative concert spanning a vast range of musical language and expressive possibility.

It was [email protected]’s first all-percussion concert and came to a rousing conclusion with Steve Reich’s Drumming. I hope the extraordinary performance and the tremendous response it drew from a full house will encourage more adventurous programs in coming seasons.

It began with Kataoka’s performance of four movements from Bach’s Violin Partita No. 3, BWV 1006, transcribed for marimba. Bach’s infinitely adaptable music takes on new dimensions with this instrument, whose sustain and resonance often made the counterpoint implied within the violin’s single lines more fully palpable. Kataoka’s performance of the Prelude established a template for the rest of the Partita, and the entire program, with the musical architecture unfolding in a clear and deeply musical fashion. The slow and graceful Loure was especially moving, as Kataoka’s playing revealed music so sweetly austere that each note seemed to open a new emotional world.

As expected, the program offered plenty of rhythmic thrills. Kataoka and Rosenbaum teamed on two marimbas for two movements of Argentinean composer Alejandro Viñao’s Book of Grooves. As the title implies, this music offers plenty of intricacy and momentum. The instruments moved subtly back and forth between interlocking and unison rhythms, sometimes surging forward together, sometimes pulling and pushing against each other. A sharply delineated performance made the most of the work’s tightly wound rhythmic and harmonic tension.Equally exciting was Froh’s astonishing solo performance of Conlon Nancarrow’s Piece for Tape, arranged for drums and woodblocks. Nancarrow’s breathless polyrhythms generate enormous energy in this brief and dizzying work, and Froh’s playing also brought out the complex counterpoint and overlapping voices of Nancarrow’s unique language.

As expected, the program offered plenty of rhythmic thrills ... A sharply delineated performance made the most of the work’s tightly wound rhythmic and harmonic tension.

One of the pleasures of watching percussion performance is the inherent theatricality in the players’ movements. The musicians chose several works that take this element further, beginning with Froh and Kataoka’s performance of two movements from Mauricio Kagel’s Rrrrrr. The great 20th-century iconoclast imbues humor and surprise into these pieces, beginning with Rim Shot, in which two snare drums, on opposite sides of the stage, engage in a heated argument, and then, played softly with palms rather than sticks, embody a subtle and complex relationship. Railroad Drama, on the other hand, uses spare visual gestures, silly and childlike poses, and brief wisps of sounds to generate both laughter and tension growing from seeing something so unexpected on stage. 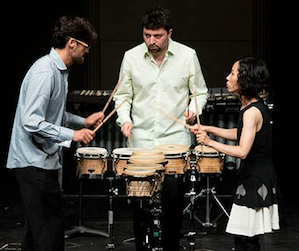 Belgian composer Thierry De Mey’s fabulous Table Music, for three amplified table tops, was one of the evening’s highlights. The piece begins with one player dragging fingertips across the wooden surface, and unfolds to include almost every conceivable manipulation of hands on wood, along with theatrical page turns and looks that were delivered with expert comic timing. De Mey is a filmmaker as well as a composer, and this work’s visual gestures are as carefully choreographed and compelling as the aural side of the work. The players addressed both their theatrical roles and the layered rhythms and timbres with an equally superb sense of ensemble.

There was a gentler side to the program too, highlighted by Toru Takemitsu’s Rain Tree, for two marimbas, vibraphone, and crotales. The players captured the intuitive feeling of the music, in which phrases feel like fleeting thoughts arising from the unconscious, woven together by the exquisite craft that marks Takemitsu’s music. An especially beautiful aspect of the performance was the evolving palette of tone colors, brought out with sensitivity to balance and a deeply felt background of silence.