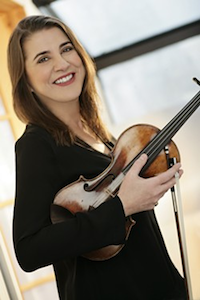 The New Century Chamber Orchestra kicked off its 23rd season this weekend with a couple of important introductions. The program offered a substantial immersion into the aesthetic world of this season’s Composer in Residence, Derek Bermel, who will return with a new work next spring. Music Director Nadja Salerno-Sonnenberg also gave the audience a gracious introduction to the orchestra’s new executive director, Philip Wilder, who arrives at an enviable moment: In Saturday’s performance at the San Francisco Conservatory of Music, the always-strong ensemble sounded better than ever, tackling an imaginative and varied program with zeal and interpretive depth.

Three works by Bermel gave a sense of what he can do as both composer and player. Bermel has long been mining many musical veins in an eclectic approach that was a bit ahead of the curve. On Saturday, three pieces of his, all from 2010 or later, offered a glimpse into his command of contemporary classical idioms and absorption of varied musics into his compositional language. Bermel is also an excellent clarinetist, and he joined Salerno-Sonnenberg and three other principal players for a substantial three-movement 2013 quintet, A Short History of the Universe (as related by Nima Arkani-Hamed).

Inspired by the titular physicist’s lectures on gravity, the work makes use of glissandos, cyclical figures, and sharp contrasts to evoke its subject. I don’t know if Greek folk music is among the traditions Bermel has studied, but it came strongly to mind in the intense, odd-metered music that opened the final movement, as well as inthe swooping and biting clarinet figures of the second. That final movement was especially exciting, as competing figures made it feel as if the players were freely riffing on the composer’s ideas even as a sophisticated compositional technique clearly lay behind it. After a lovely chorale made from string harmonics, it all came to a sweeping end as chasing figures overcame the quieter music.

Arching, bittersweet motives repeated throughout the ensemble and grew more affecting as cycles layered one upon another.

The work’s middle movement was a different affair, in which arching, bittersweet motives repeated throughout the ensemble and grew more affecting as cycles layered one upon another. Whatever the ideas animating the work, this was simply beautiful, plainly moving music. The opening movement had some intriguing moments as glissandos and scurrying figures played off each other, producing a series of ever-evolving textures, but this was the one point where the music didn’t live up to the compelling concepts behind it.

The program also found a way for Bermel’s music to speak to that of another composer, pairing his Oct Up back to back with Arvo Pärt’s signature work, Fratres, played with just a brief pause in between. This thoughtful programming showed how basic elements in common between the two works could produce complex, rewarding results. Both works make use of shifting rhythms and a simple premise — slight variations and a long crescendo and decrescendo in the Pärt, and a shifting rhythmic underpinning supporting repeated figures in the Bermel.

The Pärt work received a radiant performance, with the musicians finding their way into the composer’s sort of ethereal gravitas with patience and focus, and with the music’s emotional heft increasing as it progressed. Oct Up, also scored for the full string orchestra plus time-keeping percussion, was an exercise in controlled tension, with a gradually shifting rhythmic base and unfolding cross rhythms between sections producing a strong work with a satisfying arc to it. Various shakers, played in rock-solid fashion by guest percussionists Galen Lemmon and Artie Storch, anchored the ensemble.

The Pärt work received a radiant performance, with the musicians finding their way into the composer’s sort of ethereal gravitas with patience and focus.

Bermel and Salerno-Sonnenberg closed the program’s first half with a duet version of Silvioudades (ecos e lembranças) from his Canzonas Americanas, a work originally for orchestra. Written with great skill in the style of a Brazilian chôros, this is a straightforward, unguardedly sweet and nostalgic work, written in memory of the father of two Brazilian friends. It received a fittingly lyrical performance.

The night closed with an exciting performance of Rodion Schedrin’s crowd-pleasing Carmen Suite, a Russified ballet adaptation of Bizet’s themes. Schedrin gives the music a Russian patina with lots of percussion, mostly metallic, and textures such as the opening and closing tubular bells over dark strings. Stellar percussion again animated playing that mixed charm, tenderness, and swagger, and even brought a bit of swing to the playing in the marimba and drum kit–driven closing movements.