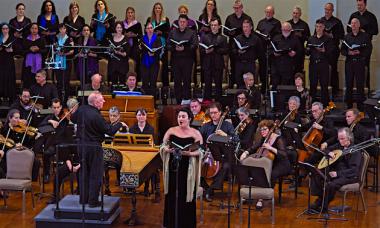 With its towering choruses and tender arias, thundering drums, heraldic brass, and a nearly three-hour libretto packed with personal and political intrigue, pride going before a fall, homoerotic overtones, and a third-act swerve into supernatural prophecy, Handel’s sacred drama Saul (1739) delivers a Baroque version of a Wagner Gesamtkunstwerk.

In adapting the Old Testament tale of the first King of Israel Saul’s psychologically complex relationship to the Goliath-slaying hero David, the composer and librettist Charles Jennens (best known for his Messiah text) tapped abundant material to narrate, dramatize, and explore. The piece absorbs, moves, and at times unsettles a listener. Its musical riches overflow in all directions.

To report that the Philharmonia Baroque Orchestra and Chorale gave a magnificent performance of the work at Palo Alto’s First United Methodist Church, in the last of four April performances around San Francisco Bay, is both manifestly true and slightly misrepresentative of the achievement. Yes, there were grand and glorious things, right up to the bells (Jory Vinikour’s bravura turn on the keyboard glockenspiel) and whistles (some sublime fluting by Janet See and Mindy Rosenfeld). But it wasn’t the orchestral showiness that made such a deep and faceted impression. What mattered was the dimensionality of the whole, the depth of feeling and dramatic urgency that came together with such authority and grace under conductor Nicholas McGegan’s sure hand.

After an extended yet musically lean and emphatic opening sinfonia, the chorus spoke first (and last) with compelling eloquence. Whether in praise, lament, indignation, or narrative command, chorale director Bruce Lamott’s ensemble was a musical force. Melodic lines were keenly etched. Mighty multi-layered chords and contrapuntal pillars rose with architectural solidity, the diction, entrances and cut-offs perfectly tooled. The women’s voices rang out with clarity and drive, notably at the moment they planted the seeds of Saul’s spasm of envy. In praising two war heroes, they noted that Saul “hast thy thousands slain” while “David his ten thousands slew.”

The 10-to-one body count was bound not to sit well with the insecure king (the imposingly tall bass-baritone Daniel Okulitch, in a title-role performance that began rather rigidly but grew more vivid, nuanced, and gripping as the evening progressed).

As the virtuous and empathic David, countertenor Aryeh Nussbaum Cohen captivated from his first self-effacing air — a dignified and demure “O king, your favors with delight I take.”

Cohen, a rising star who impresses a listener more on each encounter, partnered in sweet accord with his betrothed Michal (soprano Sherezade Panthaki, singing throughout with an effortless, be-jeweled tone and masterly technique). Cohen mustered righteous rage in a number near the end and gave even the simplest line of recitative meaning and a sense of the moment. A supple expressiveness lit up register changes, the highest and lowest notes, and precisely furled ornaments.

Never was Cohen’s gift for making the countertenor’s rarefied air deeply human more evident than it was in a murmurous plea to heal Saul’s “wounded soul.” Here was singing of a high order, not because of pyrotechnics — the aria is daringly understated — but in the sheer, heart-sure conviction of every word and liquid phrase he sang.

In addition to Panthaki, tenor Aaron Sheehan made an especially strong showing among the soloists, in a persuasive account of the honorable character and substance of Saul’s son, Jonathan. In the third-act tribute to his battlefield martyrdom, the notion that his and David’s connection was more “wondrous” than “woman’s love” felt both startling and true. Cohen’s David and Sheehan’s Jonathan made altogether worthy intimates.

The Philharmonia Baroque performance featured so much virtuosity that no accounting of it all can be complete. Soprano Yulia Van Doren, as Saul’s somewhat doctrinaire daughter Merab, merits notice for a voice that relaxed from an overly tight vibrato early on to several warm and suavely turned arias. The orchestra sounded marvelous and keenly attentive. The trombones exulted. Vinikour traded his glockenspiel for several finger-bending organ riffs. McGegan, conducting from a stool due to hip problems, displayed no limitations. Even in the church’s wide playing space, a unity of purpose prevailed.

Saul ventures into a strange new realm in the final act, with the king in disguise, a black-robed witch (tenor Jonathan Smucker) putting in an appearance, and an abrupt recalibration of the king’s reputation. And then the mists clear for an aria of disarming simplicity and gravity (glowingly delivered by Panthaki).

Fittingly, the chorus rounded things off, with a stirring, symphonically rich prefiguring of David’s future and fate. “Go on,” they urge, in one last billowing number. “Be prosperous in fight. Retrieve the Hebrew name!” Handel made that declamation gleam. So did every voice in the splendid Philharmonia Chorale.