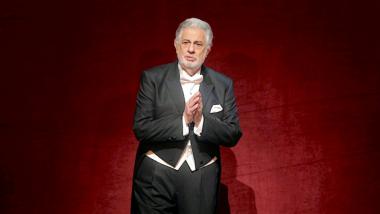 Well past the 2 ½-hour point, in the second of four encores appended to the gaudy and glorious “Plácido Domingo in Concert” Sunday afternoon at a packed War Memorial Opera House, the titular star was still pulling wonders out of his seemingly magical hat.

In the ardent “Amor, vida de mi vida,” by the Spanish zarzuela composer Federico Morena Torroba, the baritone opened new vistas. Here, after a long day of singing in both the Spanish repertoire that launched his stupendous career more than 60 years ago and two extracts from Verdi operas, Domingo still had more to reveal — a bigger, rounder, more impactful sound than the adoring crowd had yet heard, with freshly incisive, slyer, and more seductive nuances and shading.

That’s not to say this 77-year-old supernova had been slacking off till then. In a program that showcased in abundance his consummate musical artistry, remarkable durability, sustaining importance to the opera world and wider culture, and his suave showmanship, Domingo gave the audience everything they could have craved and more.

He sang with emotional breadth and depth. He made a clear and big-hearted connection with the splendid singers who shared the stage and with the audience. His embrace of those rising stars — the electric tenor Arturo Chacón-Cruz and the transfixingly self-possessed soprano Ana María Martínez — owed to yet another Domingo achievement. Both are past winners of the Operalia competition he founded and has overseen — along with his many other duties, including leadership of the L.A. Opera company he revitalized — since 1993. Other distinguished Operalia alums include Rolando Villazón, Nina Stemme, and Joyce DiDonato.

Almost 50 years after his 1969 San Francisco Opera debut, in the tenor role of Rodolfo in La bohème, and 35 years since his legendary opening-night rescue of Otello in 1983, Domingo is embedded in the company’s history and collective memory. He could do nothing more than walk onstage at the Opera House here and be showered with applause.

That was exactly what happened Sunday, when Domingo made his entrance as Germont, sporting a jaunty white fedora, in Act II, Scene 1from La traviata. Like a Broadway star, he had to wait until the clapping stopped before his encounter with Violetta (the beguiling and vocally focused Martínez) could begin.

The long scene, in which Germont first remonstrates with his son’s courtesan lover and then with the son himself (the exciting and impetuous Chacón-Cruz as Alfredo), is both overtly dramatic and subliminally charged. It didn’t all play smoothly, with some notable tempo disparities with conductor Jordi Bernàcer (leading the San Francisco Opera Orchestra). That was certainly understandable, given the complexity of the scene and what must have been limited rehearsal time. Domingo’s voice sounded slightly raw early on, and his portamento a little ragged.

No one, not even this singular performer, sings with the technical mastery at 77 that he had earlier, in his glory years as a tenor. But what he does now, as well as ever, is inhabit the music’s inner life. It was apparent in a phrase that pivoted from stern to wistful to an older man’s self-pity with intuitive surety. It was there in the amber tone that suddenly suffused his voice. Even a gesture that might come off as indicative rather than embodied — a splayed hand clasped to the chest — felt right when Domingo used it, and used it twice again later. The sense of stage presence, refined over some 3,900 performances over the decades, was one of this concert’s gratifying aspects. This was, without a whiff of disengagement, a master class in operatic command.

The Act II scenes from Simon Boccanegra that followed were aptly chosen. It was in the title role, in 2009, that Domingo made the transition from tenor to baritone. Performing on the second-act set of S.F. Opera’s current production of Tosca, Domingo once again took on the role of a father caught between a child (Martínez as his daughter, Amelia) and her lover, Adorno (Chacón-Cruz). There’s more — political intrigue, a poisoned water pitcher. Jumping into this turmoil, the three performers found its dramatic heat. Domingo, in a doge’s royal robe, sang with an expansive voice, full of anguish and lament. The lovers were both vibrant.

The second half of the program was given over to the zarzuelas — solos and ensembles elegantly framed by a large gilt-edged scarlet drop. Domingo was in white tie, Chacón-Cruz in black tie, and Martínez in a luscious cream-colored gown with a strapless multicolored bodice accented with contrasting scarves. The stage was set for a sumptuous musical party.

Even as they flared with supple melodies and the clatter of castanets, these selections from various 19th- and 20th-century Spanish composers were anything but slight. Gushingly romantic, sometimes tortured, and even religiously reverent, the music soared and caressed, exclaimed and murmured. It was all persuasively done.

Domingo used a plangent rubato to “suffer in silence” in a number by Reveriano Soutullo and Juan Vert. Chacón-Cruz sent his scintillating tenor soaring over the seismic rhythms of a José Serrano selection, after slightly over-selling a sacred piece earlier on. Martínez was entrancing, mysterious, and in sensuous but disciplined voice throughout.

Everything rose to the occasion. The orchestra gave a sublimely delicate account of the Traviata overture. There were handsome flower arrangements downstage. A nightclub atmosphere took over at the end, when the three soloists carried hand-held mikes onstage to lead an audience-singalong of Consuelo Velázquez’ hit “Bésame mucho” (Kiss me a lot).

That showbizzy feel-good finale recalled the wide crossover appeal of Domingo’s “Three Tenors” days with Luciano Pavarotti and José Carreras. How far away and yet how close that seemed, in a wondrous afternoon that seemed to telescope the deep dimensions of a great artist’s extraordinary, capacious career.

Singing for Gold: The Operalia Competition

The vocal competition equivalent of the Olympics, also the audition of a lifetime, Operalia in L.A. paraded an all-star roster of young talent in front of scouts from the world’s biggest opera houses.