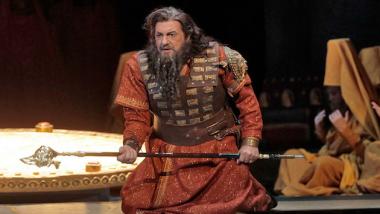 It was a good weekend for Plácido Domingo fans in Los Angeles. On Saturday, October 14, the tireless tenor-turned-baritone sang the title role in Verdi’s Nabucco. On Sunday, October 15, he moved into the orchestra pit to conduct the Los Angeles Opera premiere of Bizet’s The Pearl Fishers. Both operas included unforgettable performances in flawed productions.

Plácido Domingo has always had not just a superb voice, but an unusual gift for expression. That has been unaffected by his age or his ventures into baritone repertoire. Domingo’s charismatic stage presence and skill in shaping lines with dramatic emphases shine in his Nabucco. He is not uniformly successful in choosing his baritone roles, but this is the best fit I’ve seen. An elderly father who chews up the stage in his insanity provides great scope for Domingo’s acting talents. Early in the opera, Domingo’s voice showed signs of wear on his entrances and sustained notes, with the occasional wobble and crack. He sometimes resorted to commanding speech-song to smooth over difficulties — an effective choice, particularly in his going-mad scene in the second act. All problems vanished for a melting, lyrical “Dio di Giuda!” in act IV. His lush tone and unbroken legato were the perfect argument for his long career: No one who can still sing like that needs to retire yet!

If Domingo’s presence was a guarantee of Nabucco ticket sales, it was soprano Liudmyla Monastyrska as Abigaille who ensured the tickets were worth their price. Monastryrska has an astonishing, huge voice that she can decrescendo to a whisper with flawless control. Many sopranos struggle with the role’s low-lying portions, but Monastyrska displayed rich warmth on the lowest notes as well as ringing power on the highest. Completing the cast of principals were Morris Robinson as Zaccaria (a smooth, buzzing bass who excelled in his exposed act II aria), Mario Chang as Ismaele (a tenor whose glorious top-note squillo wasn’t consistent in the rest of his singing), and Nancy Fabiola Herrera as Fenena (a steady mezzo with velvety tone). The L.A. Opera Chorus produced a big, varied sound in most of their scenes but underwhelmed with a banal “Va, pensiero.”

Nabucco conductor James Conlon and the L.A. Opera Orchestra kept the music lively, with huge contrasts between the score’s sections of stately restraint and its booms and crashes. The brass and percussion stayed crisp throughout their quick portions.

Domingo achieved more mixed success in the pit. The overture of The Pearl Fishers shimmered brightly, and the orchestra’s playing was competent and precise throughout this new-to-them score. Glassy textures and delicate lines were clearly rendered. More intense moments underwhelmed. The storm in the second act was incongruously smooth (especially odd given the lightning onstage). Domingo had a tendency to start scenes too slowly, reaching a brisker, more dramatic pace after a few minutes of languor.

Javier Camarena dominated the Pearl Fishers cast as Nadir, singing with his usual effortless balance of ping and plush. The role of Nadir does not show off Camarena’s vocal fireworks like many of his staples (no strings of high Cs here), but it still offers him ample chances to impress with crystal tone and wrenching phrasing. As Zurga, baritone Alfredo Daza started off with an underpowered bottom and strained top but soon warmed up. He complemented his gritty tone and legato with a strong sense of drama, particularly in his guilt-wracked soliloquy in the third act. Soprano Nino Machaidze made a much better Leïla than Gilda (the last role San Francisco audiences heard from her). Her voice was too weighty for a pleasant rendition of her coloratura-filled prayer scene in act I, but her steely tone fit the rest of the role well, particularly in her duets with the two men. Gravely voiced bass-baritone Nicholas Brownlee completed the quartet of principals as the priest Nourabad. The men’s chorus sounded tentative alone, but the women sang strong and true.

Both opera productions suffered from static staging. Thaddeaus Strassberger’s Nabucco re-imagines the opera’s 1842 premiere in Milan. Royal guests file into side boxes during the overture. The cast defies them with small gestures: angrily singing into their faces, returning their flowers at curtain call, and delivering a (sing-along) encore of “Va, pensiero.” Strassberger makes sure we understand the political resonance of Nabucco in its time. This concept prompts gorgeous sets and costumes. It also serves as an excuse for a stand-and-sing staging that escapes dullness only thanks to this cast’s dramatic skill.

Penny Woolcock’s The Pearl Fishers starts with the noble goal of giving Bizet’s orientalist mishmash a specific, modern, human setting. It doesn’t quite manage that. The mix of shacks on stilts, silk saris, modern billboards, and elegantly choreographed pearl diving exoticizes poverty in the (still-ambiguous) Far East. Between-scene projections of waves and flooded villages loop for far too long without conveying tragedy. Only in the opera’s intimate final act do the characters become sympathetic and alive.

In many ways a trailblazer, Florencia en el Amazonas was the first Spanish-language opera to be commissioned by a major opera company north of the Rio Grande. Its prodigal return to the Chandler Pavilion was problematic.