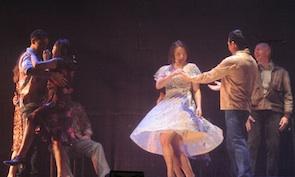 Please Cry For Me, Argentina

The semantics were subtle, but they spoke volumes about Long Beach Opera’s new production of Astor Piazzolla’s “tango operita,” Maria de Buenos Aires, which opened Sunday afternoon. The exchange took place at a preperformance event held at the Museum of Latin American Art in Long Beach. Gregorio Luke, a noted scholar and aficionado of the tango (he was also set to play the role of the opera’s narrator), was explaining the shadowy history of the tango and tango singing. But when he began to go into what Long Beach Opera planned to “do” to Piazzolla’s creation, Andreas Mitisek, the company’s general manager, principal conductor, and primary stage director, stepped to the mike and interrupted.

“Not do, Gregorio,” he said amiably. “It’s what we are doing with the opera.” The implication was that do suggested an element of force, while with indicated a form of partnership, like a pair of dance partners.

After seeing Sunday’s performance, set amid the faded splendor of the Warner Grand Theatre in San Pedro, I would have to go with “do” over “with,” since the production takes Piazzolla’s 1968 opera and sets it amid the horrors of Argentina’s “Dirty War” and its legions of “Disappeareds,” which devastated the country from 1976 until 1983 (events during which Piazzolla sought a comfortable, self-imposed semi-exile in Italy).

For better or worse, in the realm of opera production we are living through the era of the director, who feels perfectly comfortable, even obliged, to take works from the repertory and radically reshape them.

Mitisek’s directorial efforts with LBO are in this vein, but, while they’re headline-grabbing in their uniqueness, Mitisek has consistently shown more finesse and imagination. These efforts have included such site-specific productions as The Emperor of Atlantis set aboard the Queen Mary; The Diary of Anne Frank in a bunkerlike parking structure; and a splish-splash rendition of Orpheus and Euridice in an Olympic-size swimming pool.

If you’ve never seen a production of Maria of Buenos Aires, there are several reasons why. First, it requires an adept corps of lithe tango dancers, which is why it is performed not by opera companies but by dance companies. And the plot (such as it is) consists of a series of dreamy, surreal episodes worthy of Salvador Dalí or Frida Kahlo. Here is a synopsis (compliments of Wikipedia):

“The ill-omened María, born ‘one day when God was drunk’ in a poor suburb of Buenos Aires, heads to the center of Buenos Aires, where she is seduced by the music of the tango and becomes a streetwalker. Thieves and brothel keepers, gathered at a black mass, resolve her death. After her death, she is condemned to a hell which is the city itself: her Shadow now walks the city. She has returned to virginity, is impregnated by the word of the goblin poet, and — witnessed by three Construction Worker Magi and The Women Who Knead Pasta — gives birth to a Child María, who may be herself.”

This Christian-tango-allegory is illuminated by Horacio Ferrer’s poetic libretto, which was heavily influenced by the surrealist poetry of Mallarmé, Rimbaud, and Borges. It is a complex web of religious metaphors and arcane references in which the tango and its principal instrument, the bandoneón (an overgrown concertina), represent the soul of Argentina and its people.

Mitisek and Long Beach Opera have created a new context for the opera that attempts to maintain elements of its original character and poetic styling, while giving it a new, politically charged framework. Rather than wandering through a morass of surreal dream scenes, Maria (sung seductively by the sultry mezzo-soprano Peabody Southwell) and her Latin lover/tango partner, Payador (the dashing, crooning baritone Gregorio Gonzalez), fall victim to the regime of The Generals. Ultimately they find themselves imprisoned in a very real Hell.

It’s a powerful interpretation that gives the opera a new dramatic arc while making a hard-hitting political statement. The all-important musical through-line (the opera was conducted by Mitisek himself) is maintained, as Piazzolla’s tangos (with their influences of Stravinsky and Bartók) lilt, slither, slide, and occasionally scream, accentuated by the excellent playing of Nick Ariondo. In a musical mistake that is unusual with this company, Ariondo played an accordion not a bandoneón . Piazzolla fans may scream at that one.

Southwell candidly admitted that she was initially thrown for a loop by what Mitisek had in mind. But her performance on Sunday showed how completely she has managed to embrace the concept. Her grand entrance aria, “Yo soy María de Buenos Aires,” is the opera’s hit number, and surely must have influenced Andrew Lloyd Webber and Tim Rice when they were creating Evita (their best collaboration). Few singers can convincingly deliver an aria filled with passion and flair all the while dancing a tango (complete with extreme back bends) and blindfolded! Southwell can — talk about a star turn. 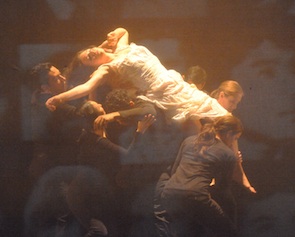 As the tone of the opera changed, Southwell proved equally convincing as Maria-the-victim, who finds herself beaten by and ravished at the hands of brutal men, then cast into a dungeon cell worthy of Fidelio. Brava, for a memorable performance.

Gregorio Gonzales is also well-cast as the young Payador. His pomade-smooth hair and pomade-smooth voice evoke the suave tango styling of the great Carlos Gardel. And in every sense he is an ideal partner for Maria, and the provider of the opera’s sung narration.

The speaking role of the narrator (the older Payador) was intoned with poetic clarity by Gregorio Luke as he sat sadly reflecting on the past in a shadowy tango bar (conceived by Mitisek, who — what else? — also designed the production). Speaking in perfect lisping Spanish, Luke infused Ferrer’s poetry with the combination of urgency and dreamy surrealism it requires.

The production is also enhanced by the use of projections, designed by Adam Flemming, that supply a sense of grainy, scratchy, newsreel believability, as street scenes of Buenos Aires, tango dancers, and mascara-clad prostitutes give way to horrific prison scenes of brutality and torture.

The downside of Mitisek’s concept is that as the political message takes center stage, the artistry and ritualized sexual combat of the tango (as choreographed in the opening scenes by Nannette Brodie) all but disappear. That alteration must have Astor Piazzolla spinning in his grave.