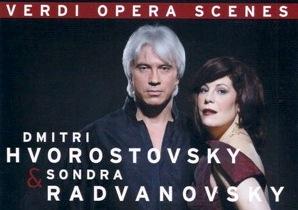 Powerhouse Verdi From Hvorostovsky and Radvanovsky

It’s hard to beat two of today’s finest Verdi singers, both in their prime, performing live in the Great Hall of the Moscow Conservatory. Recorded by Delos in June 2008, baritone Dmitri Hvorostovsky and soprano Sondra Radvanovsky sing out at their considerable best, which is far better than the baritone sang in his recent recital at Davies Symphony Hall or than the soprano has reportedly been singing in her recent Metropolitan Opera appearances.

The meat of the CD resides in three extended Verdi duets from Un ballo in maschera, Act 3, Scene 1; Simon Boccanegra, Act 1, Scene 6/7 (the Recognition Scene); and Il trovatore, Act 4 (the Confrontation Scene). All offer the artists copious opportunities to lay it on for all it’s worth.

Radvanovsky, who either by sheer force or by miking location manages to all but drown out Hvorostovsky at key climaxes, sings with such palpitating vibrancy and heartfelt depth that it’s easy to overlook that her riveting pianos, rationed with care, offer only occasional variation from full voice. Nor is there anything particularly unique about her interpretations that screams “greatness.”

The soprano’s greatest opportunity to shine comes, not in the duets, but in one of her two encores, Dvořák’s heart-tugging “Song to the Silver Moon” from Rusalka. Her tone is gorgeous and the depth of her emotional commitment so deeply moving as to render unimportant how slowly she sings. While acknowledging that some opera lovers will miss the greater dynamic variation and rapt soft singing that Renée Fleming and others have brought to recordings of this aria, there’s much to be said for a voice that literally quivers with what, to my ears, feels like genuine sentiment.

Hvorostovsky’s instrument, which in other situations has sometimes sounded unduly dark or covered, rings out unfettered. His one Verdi solo, Rodrigo’s death scene from Don Carlo, Act 4, Scene 2, matches the vocal glory of his “Eri tu” from Ballo. Indeed, the entire Ballo scene, which also includes Radvanovsky’s “Morró, ma prima in grazia,” makes my mouth water for a complete recording of the opera from these two. The same can be said of the duo’s great scene from Boccanegra.

Where the two stumble is in their other non-Verdi solo encores. “Deh vieni alla finestra,” Don Giovanni’s serenade, to mandolin accompaniment, receives a languorous interpretation, sung so slowly as if intended to seduce a turtle. Nor is the tone anywhere near as handsome as Hvorostovsky’s countenance.

Radvanovsky’s “Vissi d’arte” is an equal letdown. Performed with a tempo slow enough for a funeral dirge, it sounds as if the self-pitying Tosca is trying to convince Scarpia that it’s not worth the effort to try to get his way with her. The longest version by Callas that I have on hand, from a live Mexico City performance in 1952, runs 22 seconds shorter than Radvanovsky’s bravo-inducing 3:45. I expect that Constantine Orbelian, whose Philharmonia of Russia plays a secondary role to the voices on this recording, had something to do with this.