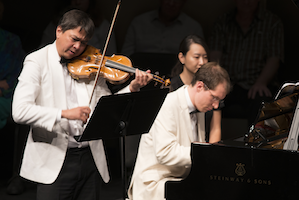 “Preludes and Fugues” was the title of Saturday’s [email protected] concert at the Menlo-Atherton Center for Performing Arts. It sounds stuffy and academic, and, indeed, the concert contained some rarefied music and some reserved, formal performances. That didn’t mean it wasn’t also interesting and exciting. It was certainly also popular: The auditorium was sold out, and overflow seating on stage was also packed.

From another perspective, the title could have been “Hail and Farewell,” to acknowledge the performers who divided the program into two approximately equal parts, intermingled somewhat in the playing order. This was the first Menlo concert for pianist Gilles Vonsattel and the last, at least this year, for the members of the Danish String Quartet, who made such a splash over the last week, and who were scheduled to fly out on Sunday.

Vonsattel opened the program with piano performances of three of the most basic prelude and fugue pairs in the classical repertoire: excerpts from Book I of Bach’s Well-Tempered Clavier. These were smooth and gentle, the Prelude in E Minor, in particular, giving a sense of flowing water building up into a rainstorm.

Vonsattel’s second appearance began with the E-minor Prelude and Fugue from Shostakovich’s Op. 87 set, an homage to Bach. Despite the different musical idiom, this too was a scholarly and lean performance.

After that, Vonsattel went a little freer in search of preludes. A fugue is a specific musical form; a prelude can be whatever a composer wants it to be. Debussy wrote a couple of dozen pieces for piano that he called preludes. Vonsattel played three of these, gently, quietly, unprepossessingly. The Engulfed Cathedral, one of the three, stayed submerged.

Lastly, he was joined by Ian Swensen for Jascha Heifetz’s arrangement of Gershwin’s Three Preludes for violin and piano. These are inherently extravagant pieces, jazzy and fun, so a little more lightness and playfulness was on display here.

Gershwin’s Three Preludes are inherently extravagant pieces, jazzy and fun, so a little more lightness and playfulness was on display here.

The Danish Quartet opened its set with Mozart’s Adagio and Fugue in C Minor, K. 546, with the Adagio serving as prelude. This is not the gracious Mozart; rather, it’s an anguished, severely uncompromising work that could be passed off as having been written over a century later.

That shifted to a complete contrast with the following piece, Haydn’s Quartet in F Minor, Op. 20, No. 5. Its finale is a double fugue, so perhaps the other three movements may be considered as forming a prelude. Although the quartet dates from Haydn’s dramatic “Sturm und Drang” period, this was a courtly and civil performance. Even the fugue danced on the edge of inaudibility, bursting into fortissimo at the coda. The entire work felt fully contrapuntal, in the sense that each voice was finely judged and balanced. That organlike sonority was part of what made this performance so exquisite; even more was the way in which each arpeggio and ornament felt utterly natural, like a living, breathing thing of its own.

The set concluded with Mendelssohn’s Capriccio in E Minor, Op. 81, No. 3. Despite its title, this too is a prelude and fugue, one even more anguished than Mozart’s, at least in the Danish Quartet’s performance, which drove through a vigorous rhythm. Here was an ideal match of performers and material.

The Danish Quartet’s performance was an ideal match of performers and material.

Later, the four members of the quartet reappeared among 14 other string players, including some of the most renowned names playing at Menlo, for a truly unusual treat: Britten’s little-known Prelude and Fugue for 18 solo strings, Op. 29. Arnaud Sussmann, as first violinist, led the ensemble and had the most prominent solo parts. Not at all like the Variations and Fugue on a Theme of Purcell (better-known as The Young Person’s Guide to the Orchestra) that Britten wrote at about the same time, this Prelude and Fugue, while tonal, is harsh and modernist.

The fugue is a formidable structure requiring quick reflexes from the performers, with all 18 of them having fugal entrances in immediate succession — a feat Britten has them pull off more than once. Instead of the chaos this recipe might generate, there was clarity and the sense that each performer was on stage for a reason.

There was more to Menlo’s day than this evening concert; Saturday was busy, by Menlo’s standards, with two other events also at the CPA. All these fugues were preceded by what Menlo appropriately calls a Prelude concert, this one by the Tallis Quartet, which played Haydn’s Quartet in G Major, Op. 76, No. 1, in a cool, wry-faced manner, following it with the same emotional state even more appropriately for Shostakovich’s tiny and brittle Quartet No. 7.

That, in turn, had been preceded by a Koret Young Performers Concert, a two-hour marathon of individual movements performed by the under-18 artists of Menlo’s Young Performers Program. As usual, the best reaction was to sit back and marvel at the facility displayed on stage. All three movements of Beethoven’s Piano Trio in D, Op. 70, No. 1, with different sets of performers, came out well, as did much else. The most amazing moment came when two 10-year-old girls, Leslie Jin and Josephine Chou, both locals, sat down at the piano and gave a casually carefree rendition of three pieces from Bizet’s four-hand suite, the appropriately titled Jeux d’Enfants.