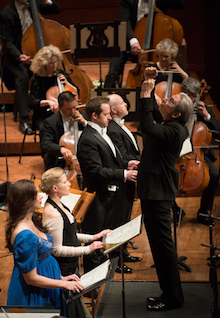 The two big works on the program bookended the span of what’s traditionally considered Beethoven’s first period, and included his first large composition. In 1790, as a 19-year-old fledgling composer, he was commissioned to set a lugubrious memorial poem into a compactly-titled Cantata on the Death of the Emperor Joseph II. Joseph, nominally the suzerain of Beethoven’s employer, the Elector at Bonn, is now best remembered for once having told Mozart he used too many notes. In the cantata’s text, by a theology student named Severin Averdonk, Joseph is worthily memorialized for having embraced the Enlightenment and, more insistently, for being dead.

The score apparently impressed Franz Joseph Haydn enough to offer himself to Beethoven as a teacher. The work, though, was never performed at the time. Perhaps the commissioning society thought it had too many notes. Hearing it today, listeners may appreciate both the young composer’s enormous potential and how far he had yet to go to fulfill it. While showing the seeds of the Beethoven to come, it makes those seeds out of watered-down Mozart and stale Gluck.

Two arias and a recitative for soprano form the cantata’s center. They were sung on Thursday by Sally Matthews with the detached pathos and elongated facial expressions of a professional mourner. Some of this achieves enough emotion that, fifteen years later, Beethoven appropriated parts for a scene in his opera Fidelio. The true beauty of Beethoven’s mature adagios was still far ahead of him, however, and the music here suffers for just not being memorable enough.

Against Handelian agitation in the strings, bass-baritone Andrew Foster-Williams gave a light, reedy account of a preceding recitative and aria for bass that’s a bit more interesting. Averdonk’s allegorical text depicts Joseph crushing the head of a monster named Fanaticism.

The funereal chorus in C Minor that opens the cantata and repeats, identically (as far as I could tell), at the end is, if not memorable, at least unforgettable. The SFS Chorus boomed its parts out impressively. The text is purely a lament. Beethoven’s setting achieves unintended morbid comedy when the orchestra drops out to let the chorus call, unaccompanied, “Joseph der grosse …” which four soloists (mezzo Tamara Mumford and tenor Barry Banks joined Matthews and Foster-Williams) complete by each singing “ist todt” (is dead) in turn, the chorus then confirming it with “ist todt, todt, ist todt.” It begins to sound like a German dub of Dr. McCoy from Star Trek saying, “He’s dead, Jim.”

The aspect of the cantata that most strikes me as showing Beethoven’s future potential is the orchestration, especially in the framing chorus. The heavy chords and alternations of strings and winds are entirely characteristic of his maturity. He merely needed a lot of practice and seasoning first. The instrumentalists and singers alike did what they could to do this work justice. It simply doesn’t merit much revival.

MTT achieved an ideal balance between the tough and the tender, and between the brusque and the witty. The small orchestra generated great propulsive power through repeated notes.

A dozen years, many lessons with Haydn, six string quartets, 20 piano sonatas, a major ballet, another symphony, and numerous other works later, Beethoven wrote his Symphony No. 2 in D, and what a difference the interval made. What followed the cantata after intermission was a masterful performance of a masterful work. MTT achieved an ideal balance between the tough and the tender, and between the brusque and the witty. The small orchestra generated great propulsive power through repeated notes. The violins dug into the music with grit, and the basses’ support could always be clearly heard.

MTT’s greatest achievement in this symphony was keeping an even symmetry between the strings and winds. The two sections trade many forte chords back and forth; if one is stronger than the other, the music sounds like it’s sneezing. There was none of that here. The chords passed around sounded as evenly balanced as if they were phrases being played by single instruments. This performance is being recorded, and should make a honey of a CD.

Two shorter works rounded out the concert. Adelaide is a short lament for a lost love, which Beethoven set in 1797 as a small epic of a through-composed song for solo voice and piano. SFS chorus master Ragnar Bohlin thought it could use some beefing up, so he arranged it for his four-part chorus, and conducted it to open this concert. SFS keyboardist Robin Sutherland accompanied. Bohlin’s is an elaborate arrangement, adding rich harmonies and a considerable helping of canonic voicing, all graciously rendered. The choral version displays less personal emotion than the original solo vocal part does, substituting power in its sorrow that makes it a good match for the Joseph Cantata.

The final and lightest piece on the program was a Sonatina for Mandolin and Piano in C Major, a tiny rondo from 1796. Performed here at a lively clip by Joseph Brent, with Eric Zivian at a period fortepiano, it has to be the most charming little piece ever heard at a symphony concert. That is, assuming the audience heard it at all. The mandolin is not the most carrying of instruments, and I wondered if the performers, tucked away in the stage’s back corner, generated enough sound to travel very far in Davies’ vast space. Judging from the warm applause afterwards, they did.