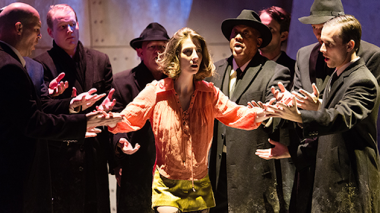 At the Prototype Festival, Opera Gets Good and Difficult

Lucy Caplan writes for SFCV as part of the Emergent Writers Program offered in partnership with the Rubin Institute for Music Criticism. Look for an article from her every month.

If classical music is stereotypically a sort of goody-two-shoes – pleasant, soothing, eager to please – then contemporary music is its difficult sibling, the challenging teen of the musical family. In this context, difficulty usually has to do with sound: clashing dissonances, amorphous forms, weird timbres, and so on. But this music also has a penchant for provocative subjects and a willingness to unsettle.

At the Prototype Festival in New York City, which concluded January 15, Missy Mazzoli’s Breaking the Waves and M. Lamar’s Funeral Doom Spiritual were difficult in this latter sense. These works confront violence, misogyny, and racism head-on. The subject matter enhances rather than detracts from both works’ artistic excellence. These are remarkably crafted, staggeringly resonant pieces that affirm the promise and vitality of new opera.

Breaking the Waves tells the story of Bess McNeil, a young, excessively innocent woman from a religious community in rural Scotland who marries an oil rigger named Jan. After Jan is paralyzed in an accident, he implores Bess to sleep with other men and tell him about her experiences, insisting that her doing so will keep him alive. Her acquiescence to her husband’s wishes causes the ultimate tragedy. Based on Lars von Trier’s 1996 film, the opera is a co-commission between Opera Philadelphia, where it premiered in September, and Beth Morrison Projects (Morrison is one of the co-directors of the Prototype Festival).

Royce Vavrek’s libretto matches Mazzoli’s music in subtlety and emotional impact, effectively capturing both the limits and the surprising depth of Bess’s psychology: When she obeys Jan’s desire that she seek out other lovers, for instance, she ponders, “I have always been stupid, but I am good at this.”

At its third and final New York performance, on January 9 at NYU’s Skirball Center for the Performing Arts, the cast invested fully in these complex characters. Kiera Duffy gave a phenomenal performance as Bess. This is a demanding role, vocally and physically: Bess sings almost constantly, appears in various states of undress, and is subjected to emotional and physical violence. Duffy traversed enormous emotional ground and was consistently attentive to the character’s nuances, yet she never let go of an overarching sense of urgency.

As Jan, John Moore sang with a beautifully rounded, enveloping tone, and his character was both sympathetic and enraging. Theodora Hanslowe and Eve Gigliotti offered heartfelt portrayals of Bess’s mother and sister-in-law, respectively. The men’s choir of Trinity Church Wall Street, playing various roles throughout, sang and acted with focus and intensity. The excellent orchestra, conducted by Julian Wachner, murmured, rumbled, and soared through Mazzoli’s score, equally adept at searching lyricism and spooky atmospherics. A spare set, by Adam Rigg, evoked the bleakness of the landscape through looming wooden structures.

Breaking the Waves refuses moral clarity. In one of the creepiest moments in this intensely creepy opera, two men switch roles before our eyes. Bess, attempting to fulfill Jan’s desires, presents herself to two menacing, self-described “sick fuckers on the red boat.” In the next scene, we see these same men don black coats and become church elders, enforcers of the community’s ethical standards; the two ends of the moral spectrum converge. The implications are disturbing: how much moral space is there between the men on the boat, who commit sexual violence toward Bess, and the church elders, who, earlier in the opera, told her that women must, at all times, “submit yourselves unto your own husbands”?

According to Lamar’s program notes, the piece explores the horrific history of antiblack violence “via slave ships, plantations, Jim Crow, mass incarceration and assassinations via police shootings.” Through his work, he writes, “I aim to construct an emancipated self through the ruins of the U.S. white supremacist empire.” Lamar wrote the libretto in collaboration with Tucker Culbertson, a law professor and artist, and the music in collaboration with Hunter Hunt-Hendrix, a New York-based “composer-philosopher-poet.” There is no real set, but a hulking wooden coffin at one corner of the stage and graphic black-and-white projections by Sabin Michael Calvert provided plenty of visual stimulation.

The history of racial violence comes to life here through the narrative of a man whose beloved has been killed and his ensuing struggle to come to terms with the loss: “Since they took you from me / Your death has become my life.” The details of the story are left vague. Lamar organizes the piece around a series of songs, each rooted in a spiritual and transmogrified by means of his insistently experimental musical language, which he has described as “apocalyptic lieder gospel.”

Lamar pushes his voice to its limits. He is a male soprano who ascends to long-lasting high notes one minute and growls into the microphone the next. He often begins a note slightly flat and holds it there resolutely before finally inching up to the true pitch – a sonic microcosm of the work’s unrelenting sense of struggle. The black-clad instrumentalists (two basses, cello, and viola) accompany him in four-part harmony, set the scene with rattling col legno (back of the bow playing) and eerie harmonics, and weave in and around his vocal line. Their playing was strong, with especially impassioned solos by violist Stephanie Griffin.

Funeral Doom Spiritual is heavy on allusions, making frequent reference to artists and thinkers who inform Lamar’s work. At one point, the phrase “60 million and more” flashed across the stage, a reference to Toni Morrison’s novel Beloved. The program notes cite bell hooks, and in a post-concert talkback, Lamar highlighted the influence of legal scholar Anthony Paul Farley (who was present), whose work he quotes in the libretto. Amid this richly woven tapestry of citations and allusions, though, I sometimes lost sight of Lamar’s own character. Who was this man, and who was the beloved he mourned? He wasn’t so much opaque as unfocused, lines sketched but not filled in. The impulse to generalize in order to convey the enormity of the subject makes sense, but it came at the expense of emotional specificity.

Twice during Funeral Doom Spiritual, Lamar gestures toward the audience, first while singing the word “guilty,” and then during the final line of the piece, “None of you will make it out alive.” He compels us to confront a disturbing truth: We are all implicated in the continued existence of racism and white supremacy, and complicit in violence and repression. This is not easy to hear, but sometimes a little difficulty is what we need.