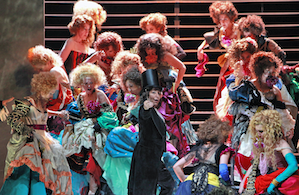 In Quest for Perfection: Bellini at S.F. Opera

From its opening aria, Vincenzo Bellini’s bel canto gem, I Capuleti e i Montecchi, declares that it is a singer’s opera. You can try to popularize it, as San Francisco Opera has done, by calling this story of Romeo et Giulietta The Capulets and the Montagues, and, while retaining Felice Romani’s Italian libretto, anglicizing the characters’ names in the supertitles, but it’s the singing that makes or breaks the performance.

In an opera with five principals, all of whom spend a good deal time performing an astounding succession of supremely beguiling melodies that are, at the least, as exposed as anything Mozart ever wrote, you need voices that seize attention. In the case of the two female leads, who carry the bulk of the evening and upon whom Bellini lavishes his most magnificent writing, you need voices that seize the heart, stun the senses, and ultimately take your breath away. Anything short of that, and anyone with a sense of what the music demands feels a sense of disappointment.

In mezzo-soprano Joyce DiDonato (Romeo) and soprano Nicole Cabell (Juliet), we had, on paper, two extremely gifted artists whose solos and duets promised to be a highlight of the opera season worldwide. DiDonato, a Merola Opera program alum, is a true Golden Age singer with a sizable voice whose wide range extends from grave lows to thrilling highs. She also has an oft-astounding gift for coloratura ornamentation, fierce intelligence, and deep emotional commitment to her music.

Save for a few high notes whose color wasn’t exactly right, and one awkward run in her first aria, DiDonato was magnificent. Her final death scene was so riveting that it even silenced the coughs of virtually all of the persistent, fall cold-plagued audience members.

Cabell, too, sang beautifully. Her duets with DiDonato were a special high point, their voices blending almost as magically as the fabled duo of Joan Sutherland and Marilyn Horne (or, later in their careers, Montserrat Caballé, and Horne). She also joined DiDonato in showing a fine understanding of bel canto nuance and shading, and sang with increasing elasticity as the night progressed.

Ultimately, however, Cabell is not a coloratura. As much as she worked to soften and lighten her high range, and as astounding as her physical balance and control were in scenes literally sung on the edge, she lacked the soaring, ideally silvery sweet top that Bellini’s music demands. Singing that should have been ravishing was instead quite beautiful.

And there was the problem. In I Capuleti e I Montecchi, beauty in and of itself is not enough. Time and again, in scene after rousing scene, Bellini demands — virtually screams — go up! This aria, this duet, this ensemble needs the punch of a high ending. But whether in Juliet’s breathtaking opening recitative and aria, “Eccomi in lieta vesta … Oh! quante volte,” at the end of Romeo’s big scene with his rival, Tebaldo (tenor Saimir Pirgu), or in the finale in which all five principals join the chorus in singing full out, the singing did not deliver the thrilling high punch that the music demands.

Pirgu was a bit of a disappointment. He doesn’t have that much to sing — Bellini had to rely on a second-rate tenor in the opera’s premiere, and thus minimized Tebaldo’s role — but he does have two wonderful arias that demand a free, shining, soaring tone. Pirgu’s high notes were quite strong and 95 percent solid, but they felt punched out, added atop a voice whose basic timbre lacks the heart-seizing warmth and brilliance of a Vargas, Calleja, younger Carreras, or Pavarotti. He was quite good in an opera in which quite good isn’t good enough.

In the smaller role of Giulietta’s father, Capellio, the wonderful bass-baritone Eric Owens sang with majesty and authority. His voice surprisingly lacked the volume expected from someone who has distinguished himself in Wagner, Adams, and Gershwin, but he was quite fine. Even more impressive was baritone Ao Li, an Adler Fellow whose vocal strength and beauty, allied with an increasingly convincing stage presence, were a joy to hear. This man could go very far.

As for the male chorus — women choristers are so minimized that director Vincent Broussard had costume designer Christian Lacroix stick big bright flowers in their silent mouths in Act 1 Scene 3 — chorus director Ian Robertson once again honed them to near perfection.

Many conductors try their hand at bel canto, but few deliver the extremely pliable tempos, understanding of nuance, and way with light and shade that Riccardo Frizza brought to the score. Showing supreme respect for his artists, Frizza molded Bellini’s vocal line to the extent his singers allowed, lingering over notes and phrases without once becoming mannered. The man clearly loves bel canto writing, and understands its ultimate potential. Bravo!

Giulietta delivers her opening aria climbing into and standing on a sink, often with her face against the wall and her back to the audience. A sink, as in this relationship is going down the drain? Principals spent much of their time in dim light or shadows, which obscured facial expressions. Lighting designer Guido Levi’s choice to put the spotlight on a suspended sculpture while letting DiDonato and Cabell languish was ridiculous.

Finally, the several scenes staged on bleachers made an already static concept even more so. Bellini may not have written an ideal ending for the opera — the fabled Maria Malibran was so disappointed with its lack of prima donna fireworks that she substituted a scene from Vaccai’s opera on the same subject — but, with everyone but Romeo and Giulietta frozen on the bleachers, San Francisco’s finale fizzled.