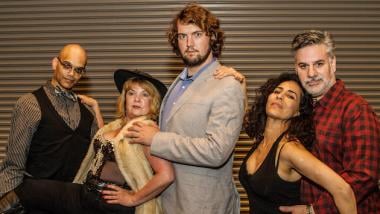 “The Opera Hitler Loved to Hate!” read a title card projected over the Redwood Symphony as audience members filed into Cañada College Main Theater on Sept. 24 for a one-night-only performance of Bertolt Brecht and Kurt Weill’s The Rise and Fall of the City of Mahagonny. With many fearing that the United States may be drifting toward totalitarianism, Mahagonny — which premiered in 1930, only to be banned by the Nazis three years later — was a timely work to stage just over a month before a controversial election.

Director Phil Lowery’s semi-staged production, which used Michael Feingold’s popular English-language translation, tapped into Mahagonny’s political current without beating us over the head with heavy-handed symbolism. There’s enough of that already in Brecht and Weill’s opera, which satirizes National Socialism and capitalism.

Mahagonny is a Las Vegas-like city of sin that springs up overnight in the Florida desert (Brecht and Weill seem not to have been too familiar with the geography of the swampy state). Lumberjack Jimmy Macintyre transforms the town after he suggests that it do away with all laws and that the citizens do as they please. However, in his drinking and cavorting with whores, Jimmy breaks the one law that still remains (and that governs all capitalist societies): he runs out of money.

During the death march number that accompanies Jimmy’s execution, Lowery had the singers hold up picket signs displaying various slogans, some derived from meaningless election mantras: “Make Mahagonny Great Again,” read one. “Mahagonny: Stronger Together,” read another, with the “M” made to look like Hillary Clinton’s trademark “H” logo. While the differing opinions expressed on these signs divided the chorus members, they could all agree on the one irrefutable slogan they sang: “Nothing you can do will help a dead man.”

But politics aside, the performance was, musically, extremely enjoyable. I was shocked to learn that the orchestra was made up of volunteers; they played like they were getting paid. Conductor Eric Kujawsky found the perfect balance between Weill’s big symphonic sound, heard in the polyphonic introduction and fugal storm scene, and the smaller-scale cabaret elements, heard in the “oom-pah” music-hall accompaniment of banjo, saxophone, muted trumpet, and snare.

The male chorus, which dominated much of the opera, was lively, if a little ragtag. They had to borrow some ladies from the female chorus to serve as cross-dressing “tenors.” Yet this casting choice, presumably due to a shortage of men, actually tapped into the subversive milieu of Weimar-era Berlin, where our modern-day LGBT culture first emerged. Balancing these drag kings was Michael “Firefly” Perry, a local folk-grunge singer-songwriter who joined the chorus of whores dressed in a pretty pink slip. For a few numbers, Perry would slink away from his fellow ladies of the night to join the orchestra as a guitarist, sitting on the floor at the foot of the conductor.

But perhaps it was too lovely and a bit too polished. Indeed, if the audience is left completely satisfied, according to Brecht, then the playwright hasn’t done his or her job. Theater should alienate, outrage, and incite political action. As odd as it sounds, I actually would have preferred some grittier and coarser singing from the soloists — something in the imperfect cabaret style of Lotte Lenya or Ute Lemper. After all, Mahagonny is an “opera” with scare quotes around it.

The exception was the lanky and catlike Michael Mohammed as Fatty the Bookkeeper. As a musical-theater performer, his voice felt better suited to Weill’s sleazy dancehall tunes. It did become obvious why opera training might be necessary to perform this work when Mohammed struggled occasionally to project over a full forte orchestra.

As Jimmy, Stephen Guggenheim’s Italianate tenor was the one trained operatic voice that didn’t feel out of place. In spite of his character’s outward display of cynicism and his mountain-man swagger, he is actually a rather naïve and tragically Romantic figure. In his unsuccessful quest to attain happiness, Jimmy is destroyed at the hands of the very monster he helps to create. Guggenheim’s duet with Jimmy’s newly purchased prostitute Jenny Smith, sung by soprano Raeeka Shehabi-Yaghmai, felt like an intimate love scene by Puccini or Verdi, despite the explicit lyrics. (Shehabi-Yaghmai even pulled off a pair of black lace panties when Jimmy told her to “skip the undies.”) It’s one of the few moments when Brecht and Weill nearly slip into the authentic and genuine. The other is Jimmy’s aria as he awaits his execution; Guggenheim’s splendid performance called to mind Cavaradossi’s “E lucevan le stelle” from Tosca.

In one respect, the production did indeed leave me wanting more, but not for the reasons Brecht intended. Some of the best numbers were whittled down or cut completely. I would have liked to have heard more of the rich bass of Ben Brady, who, as Begbick’s right-hand man Trinity Moses, was robbed of his “God in Mahagonny” aria. Shehabi-Yaghmai was sexy and acrobatic in Jenny’s aria “In this life you must make your own bed,” performing a striptease on a pool table with a cue in place of a pole. Unfortunately, this number — arguably Weill’s best music and the best performance of the evening — was reduced to a single verse and chorus. I wasn’t provoked into taking up political arms, but it did incite me watch to Audra McDonald’s complete performance of the song on YouTube once I got home from the theater.