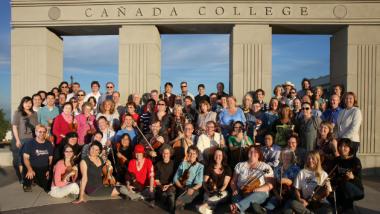 The Redwood Symphony drew a moderately full house to Cañada College in Redwood City on Saturday for a program featuring Jean Sibelius’ Symphony No. 7 and Bartók’s Violin Concerto No. 2. While these are not the average crowd-pleasers of 20th-century music, they pleased this crowd. The earnestness with which these serious works were played contributed to this response.

Music Director Eric Kujawsky, who conducted the program, described both pieces as masterworks of form. In truth, it’s debatable whether anyone really knows what the form of Sibelius’ symphony is. One of the first symphonies in one movement, it fits together its various parts with such crafty intricacy and intense condensation that commentators disagree on how many sections it has or what they are.

Regardless of others’ views, it’s clear that Kujawsky had his own image of the symphony’s form in mind. In this performance, the music felt as if it was drifting around slightly until it would snap into place on a stable base for a while. Then it would unobtrusively detach itself and go off in search of the next platform. The sense of discrete sections separated by transitions was strong.

Beneath the wobbliness of line and catches in intonation endemic to a volunteer orchestra, there was a pleasing performance in here. It conveyed the distinct sound, cold yet full-bodied, of Sibelius. The repeated trombone call that anchors the work was played by Eric Dabel with nobility.

Bartók’s concerto was composed in 1938. It’s a huge and multi-faceted work that seems to be made half of 1920s dissonant Bartók and half of 1940s accessible Bartók. The orchestra was at its best, frequently outstandingly brash, in the first movement. The cries and exclamations in the score were made for these players’ strengths.

Liu brought out her sense of humor for her encore, the “Obsession” movement of Eugène Ysaÿe’s Sonata No. 2, a goofy mashup of phrases from a Bach solo prelude with a bit of the Latin hymn “Dies Irae” (day of wrath).

In form, Bartók’s concerto is made largely out of theme and variation. That’s about all it has in common with the genial third work on the program, Variations on a Theme for Bassoon and Orchestra by Doug McCracken, co-principal bassoon with the symphony and soloist in this first performance of his own music.

Neither McCracken in his program note nor Kujawsky in his pre-concert talk cared to identify the theme, other than to say that listeners would know it from childhood. It turned out to be “I’m a little teapot,” with the final phrase morphed into the conclusion of the Jeopardy theme song. Mozart and Ernő Dohnányi with their sets of variations on “Twinkle, twinkle, little star” have a worthy successor in McCracken.

The theme’s appearance at the start, in pizzicato from the violins, was nearly drowned by audience laughter. McCracken picked it up with smooth polish and, accompanied by the double basses to start with, ran it through a series of standard classical variation tricks, quickly taking it far from the simple original. There was a fast variation drowned in a shower of quick notes, a slow variation in the minor mode, and a drunken-sounding variation – which, as if to prove that the bassoon isn’t the only instrument in the orchestra that can sound drunken, was then handed off to the trumpets.

The whole seemed almost incongruously light next to the Sibelius and Bartók works. Yet, like those, it’s a composition whose writing and performance were pursued with skill and dedication.