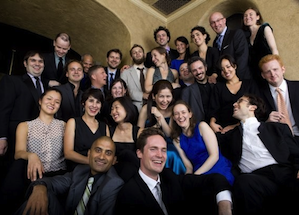 The same searching intellect and musical breadth that Jeremy Denk brings to his work as a pianist and writer marked his approach as guest music director for this year’s Ojai North programs at Cal Performances. Although Denk didn’t play on Saturday’s afternoon program, which was anchored by the orchestral collective The Knights, his inquiring spirit was very much in evidence and was clearly shared by a large and engaged audience at Hertz Hall in Berkeley.

The festival’s programs this year veered from very old to freshly minted music, with the new often being consciously drawn from the old. Much of Saturday’s music derived from older sources and was re-created or reconfigured in some way, highlighting both the pan-stylistic nature of much contemporary music and the remixed culture in which it is being created.

The program’s opener, Charles Ives’ chamber orchestra work Three Places in New England, grows from two kinds of reconfiguring. Ives built much of the piece from his freewheeling quotes of hymns, slave songs, patriotic ditties, and even Beethoven, sweeping them into his own vision. At the same time, the 1930 chamber orchestra version has roots in his earlier version for full orchestra, now partly lost, so that this secondary version has become primary. With The Knights under the deft direction of Eric Jacobsen, the varying character of each movement was deeply felt, from the inviting enigma of “The ‘St. Gaudens’ in Boston Common (Col. Shaw and his Colored Regiment)” to the concluding “The Housatonic at Stockbridge,” an evocation of a riverside walk that really did hold nature’s power and mystery, made especially alive through the ensemble’s gorgeous string playing.

Andres is an enthralling pianist, with a wonderful touch and fluency.

In between, there was a sheer joy in sound that came through the jaunty collision of patriotic tunes of “Putnam’s Camp, Redding Connecticut,” a deliberately jumbled texture that was played with remarkable clarity and balance. This group truly embodies the ideal of a chamber orchestra, commanding a huge range of color and a massed power while the music sings with a lucidity and intimacy that would be expected from a much smaller ensemble. The effect was stunning.

The most consciously re-created work on the program followed, Mozart’s “Coronation” concerto recomposed by the young pianist and composer Timo Andres. Writing for himself as soloist, Mozart left incomplete much of the left-hand part of this work, and Andres has jettisoned the custom of completing the concerto in historically correct style, lengthening and expanding the piece with new harmonies, techniques, and historical references up to nearly the present day.

Andres takes a consciously eclectic approach here, but this isn’t the current post-genre sound with rock, electronica, and so on in the mix. Instead, it’s a stylistic mashup of many composers who followed Mozart, up until some relatively recent voices. The orchestral parts are essentially untouched, yet the piano’s music is expansive and surprising. The Romantic era’s heavyweights poke their heads into the music, as do many of the great 20th-century composers for the piano, especially Bartók, Stravinsky, and Prokofiev. The added harmonic colors evoke jazz at times, especially the poignant new harmonies underpinning the Larghetto.

The ensemble’s sensitive approach brought about a brief and transporting moment.

The piece is a little long in this rendering; still, the mélange of styles feels surprisingly organic and grows from the implications in Mozart’s music, suggesting the extent to which the many referenced composers would have had Mozart in their ears as they created their own bodies of work. In any case, this would have been worth hearing simply for the playing. Andres is an enthralling pianist, with a wonderful touch and fluency.

Two short works came midway through the program, beginning with Morton Feldman’s lovely 1970 memorial for his piano teacher, Madame Press Died Last Week at 90. Anchored by a repeated descending major third (perhaps saying “good-bye”) in two alternating flutes on opposite sides of the stage, the rest of the ensemble responds with transparent and slightly varying colors, like changing afternoon light on a still life. The ensemble’s sensitive approach brought about a brief and transporting moment.

Karlheinz Stockhausen seems to be undergoing a bit of a reassessment these days, and one way to examine his music is to rework it. Recent Pulitzer Prize winner Caroline Shaw has done so with an arrangement of “Leo” from Tierkreis, Stockhausen’s cycle of 12 works based on the signs of the zodiac. Arranged here for solo violin and a quintet of winds, brass, and bass, the music was anthemic and even a little bouncy, with short repeated figures that are a bit simpler than many of the composer’s works. Charm is hardly the first word one associates with Stockhausen’s music, but this performance had it.

Kurt Weill is, by many decades, an avatar of the flow between “high” and “low” culture happening on a wide scale today. The Seven Deadly Sins, his 1933 song-ballet that is his final collaboration with Bertolt Brecht, mixes pop styles of the day like tango and foxtrot with oratorio and opera, and still seems very contemporary indeed.

Against a grand, sweeping background provided by The Knights, vocalist Storm Large (yes, her real name) and the men’s vocal quartet Hudson Shad traveled through Brecht’s satire of capitalist striving with great flair, as Anna and her sister Anna, both played by a single soprano, ramble through seven American cities and engage in a search for money — and a new sin — in each. Veteran performers of this piece, Hudson Shad was a marvel as Anna’s commenting Family, whether functioning as a barbershop quartet or as a madrigal group. Their melding with the colors of the orchestra, functioning almost like a new instrumental section at times, highlighted Weill’s genius as an orchestrator, which is very much on display in this ever-surprising work.

Storm Large, as Anna, brought an expressive cabaret sound and sensibility to the work, emphasizing the bite of the music and a cultural source that made its way into Weill’s artistry. A little staging with a cabaret table and some slinky dancing heightened the effect, along with some dramatic touches from Hudson Shad. But her singing left out several of the colors and effects that are possible in this music with a fuller voice, and I felt that there was a side of the story still left to be told.