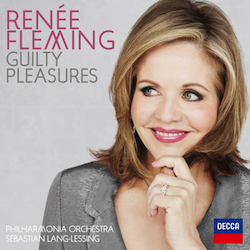 Soprano Renée Fleming has been on a recording roll of late. First came the Grammy Award–winning Poèmes, a gorgeous disc of French masterpieces that includes a superb, sensually inflected version of Ravel’s Shéhérazade. Then followed, among other titles, a live DVD recording of her role debut in Ariadne auf Naxos that displays her impeccable, soaring Straussian line in all its glory. Now, just three months later, comes Guilty Pleasures, a luscious grab bag of songs and arias that allows Fleming to indulge in personal favorites — music she has long wanted to record. If she occasionally overindulges, and crosses the fine line between passionate outpouring and romantic excess, she does so with vocalism so sumptuous that most listeners will find themselves begging for more.

Recorded in August 2012, when Fleming was 53, her voice sounds richer and more luxurious in the middle than ever before, if occasionally a bit thin at the very top. While in the more familiar selections, including Berlioz’s “Villanelle” from Les Nuits d’été, Wagner’s “Traume” from the Wesendonck-Lieder, Delibes’ “Les Filles de Cadix”, “La Delaïssádo” (The forsaken shepherdess) and “Malurous qu’o uno fenno” (Unfortunate is the woman) from Canteloube’s beloved Chants d’Auvergne , and “Nana” and “Canción” (Song) from Falla’s Siete canciones populares españolas (Seven Spanish popular songs), may not efface classic versions by other artists, the sound of voice and orchestra together are all but irresistible.

If she occasionally overindulges … she does so with vocalism so sumptuous that most listeners will find themselves begging for more.

Abetted by an engineering team eager to magnify the size of her voice, Fleming was no doubt encouraged to overindulge by conductor Sebastian Lang-Lessing, who seems intent on underscoring each of her inflections with instrumental commentary from the Philharmonia Orchestra. Together they’ve set down, somewhat paradoxically, one of the slower versions of Duparc’s exquisite song “Phydilé” that I’ve encountered, and a surprisingly fast “Flower Duet” (as in the British Airways commercial) from Delibes’ Lakmé in which mezzo-soprano Susan Graham sings a refined, idiomatically French line while Fleming swoons above and around her.

If, in “Phydilé,” Fleming’s final, forte wish for romantic union sounds more operatically desperate than appropriate, she and Lang-Lessing are so determined to pull out all the stops in an almost five-minute “Danny Boy” that the forte outpouring at the end of the second verse brings to mind Violetta bidding a tearful farewell to her beloved Alfredo in La traviata. You may love it — one world-class violinist says it reminds him of Fritz Kreisler’s far more restrained arrangement — but I find it way over the top.

Regardless of your reaction, you’ll be grateful for the rarities.

Regardless of your reaction, you’ll be grateful for the rarities. How often do you encounter recordings of Undina’s Aria from Tchaikovsky’s Undina, “Za stihlou gazelou” (In pursuit of the slender gazelle) from Dvořák’s Armida, Vendulka’s Lullaby from Smetana’s Hubicka (The kiss), and Corigliano’s “Once there was a golden bird” from The Ghosts of Versailles? Fleming may lack the tears in the voice and innate sense of tragedy that make the recording of Refice’s “Ombra di nube” (Cloud-cast shadow) by its dedicatee, “La Divina” Claudia Muzio, so irreplaceable, yet the beauty of her singing seduces in its own right. If, when all is said and done, Guilty Pleasures suggests that Fleming, who earlier in her career sometimes coasted on the glories of her voice rather than concentrating on interpretation, now sometimes overcompensates in that regard, it also assures us that there is far more beauty yet to come from this remarkably versatile artist.