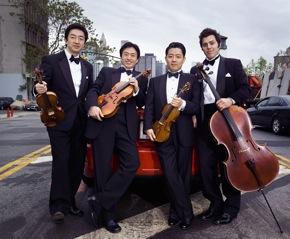 Restful Exoticism From the Shanghai Quartet

Some chamber ensembles are just from somewhere, without that having much of an effect on their choice of repertoire. The Shanghai Quartet, though, chooses to acknowledge in its concert programs that three of its members are from China. (The fourth, cellist Nicholas Tzavaras, is a Caucasian from New York. The group is based in the U.S. but visits China frequently.) Sunday’s program contained music that was comfortable and familiar for them, though somewhat more unusual, even exotic, for a typical string quartet concert. However, as Janet Sims pointed out in her preconcert talk, this is appropriate for the multicultural Bay Area.

The concert opened with Song of the Ch’in, by Zhou Long, a folk-inspired work the quartet found when asking around among Chinese composers for string quartet pieces they could play. It’s become one of their signature numbers. The ch’in (also called the guqin) is a soft, zitherlike instrument traditionally played by scholars and poets. Zhou Long places a gentle melody in a quiet, harmonic setting evoking early morning. The viola, played by Honggang Li, leads the ensemble. Gentle special effects — glissandos and bent notes, thumpings and crackings — imitate the plucking of the ch’in and the sound of a bamboo flute. The whole is nicely balanced between exotic sound and a restful air that’s pleasing to the Western ear.

The quartet’s second violinist, Yi-Wen Jiang, has arranged a series of folk songs and short original compositions by various Chinese composers for string quartet, which the Shanghai Quartet has recorded under the group title ChinaSong. The Quartet played three of these, forming a fast-slow-fast suite. Jiang’s arrangements are more thoroughly Westernized than Zhou Long’s composition. Only the pentatonic melodies, and one amazing passage played by Weigang Li on the bridge of his first violin in the first work (Yao Dance, by Mao Yuan and Tie-Shan Liu), gave a distinctly Chinese flavor to my ear. The second piece (Shepherd’s Song, a folk song from Inner Mongolia) sounded as if Antonín Dvořák had been invited to go to China instead of America. It had the lonesome sweetness of Dvořák’s “American” Quartet, with a lonely, yearning phrasal melody for the first violin. The final piece (Harvest Celebration, by Jing-Ping Zhang) had some of the character of Dvořák’s bouncier music. It’s just a lively dance with many quick, repeated phrases and a little knocking as special effect.

An Emotive Penderecki Work Marked by a Haunting Melody

If these works are standards in the Shanghai Quartet’s repertoire, so is Krzysztof Penderecki’s String Quartet No. 3, which the Shanghai players commissioned and have been playing around the world since premiering it two years ago. This is a strongly sectional work in a single, 16-minute movement. It’s highly emotive, as if the emotions had been put on the music as labels, eliciting subjective feelings by means of the intensity of the objective processes that went into the work’s creation. The music begins with a high-pitched, strained, chromatic melody for viola. Tzavaras in his program notes calls this “screaming,” while Honggang Li, the violist, prefers to think of it as “haunting,” as he explained in a talk before the concert. The composition is anchored by a motorized scherzo, played in a near-monotone resembling Shostakovich except that it’s jerkier, with more stops and starts, than is typical of that composer. Intervening slow sections were light and knowingly tender, slowly becoming expressionist in style and evoking a 20th-century Viennese salon where you’d hear music by Alban Berg or Alexander Zemlinsky. A tender Eastern European melody over pizzicato sounded almost like another visit from Zhou Long.

The suffering expressed in Penderecki’s quartet is palpable, and I began to wonder if he is expressing the same agony as Schubert does in his "Death and the Maiden" Quartet. For that was the work that concluded the the program. After the new and exotic, for grounding there’s nothing like a Viennese classic. This was a performance that finely integrated the instruments into a caressing, organlike sound, while giving great attention to the inner voices. Jiang’s second violin provided key sweetness. Tzavaras’ cello was also consistently lyric and soulful, strongly carrying — especially in high, held notes — without growling. Depths were not plunged nor craggy heights scaled here; rather, the preference was for shaping Schubert’s work well.

The slow second movement and the trio of the third movement’s scherzo were thus especially well-done. The jagged first movement was too fast to carry its full power, and some of its forceful moments were half-swallowed. Weigang Li also abruptly cut off the crying high A’s that are the crucial feature of the finale. However, any generalization that this ensemble shines only in quiet, lyrical passages was belied by the dark determination with which the players ruthlessly carried out the constant rhythmic drone of the last movement. They worked hard to build that finale, and in doing so displayed great technical virtuosity.

Given, though, that penchant for the lyrical, and those Dvořák echoes in ChinaSong, it was altogether appropriate that, for an encore, the Quartet would choose Dvořák’s own string quartet arrangement of his gentle waltz in A major for piano, Op. 54, No. 1. It proved to be another lovely, caressing performance.