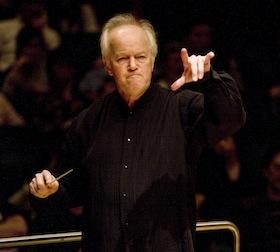 “Former Music Directors Return to the Podium” read the San Francisco Symphony posters displayed outside Davies Symphony Hall for the last three weeks. After Conductor Laureate Herbert Blomstedt’s customary two-week stint, we had the long-awaited return of his predecessor, Edo de Waart. He often paid an annual visit during Blomstedt’s tenure, and concertgoers were always glad to see him. Some time after that, though, he seemed to fall off the guest list, and I believe this is his first return engagement in quite a few years. I heard de Waart’s concert in Friday’s performance.

As music director from 1977 to 1985, de Waart didn’t have the charisma of Michael Tilson Thomas or Seiji Ozawa, nor the burning intellectual energy of Blomstedt. In addition, he was a rather bland-looking fellow — even more so, now that his once-blond hair has turned almost completely white. This image is unfortunate, because it obscures what a fine music director he actually was. He presided over the building of Davies and the conversion of the Symphony to full-time status, he hired SFS’ first composer in residence (a young fellow named John Adams), and he was an excellent orchestra builder. He inherited a somewhat wayward, blatty band and built it into a solid ensemble that was ready for Blomstedt to take it the next step: to greatness. I could hear SFS getting better every year that de Waart was here.

One of several recordings he made with his former band was of the Symphony No. 3 by Saint-Saëns, his “Organ” Symphony. This is the late-Romantic blockbuster that headlined Friday’s concert. Although the composer described it as a “terrifying imp” of a work, de Waart was not out to terrify or shock. The climaxes tended to the simple and straightforward. And they were exciting and full enough. The outstanding feature of this performance was the beautifully extended sense of line in the slow movement. While de Waart’s conducting doesn’t bring out as much layered depth from the orchestra as does Blomstedt’s, it is still a rich and satisfying sound, especially in the strings, and he does spin out those slow melodies exceptionally well.

Trpčeski eschewed the key-banging and high emotionalism he’s used in other concertos in favor of contemplation.

Jonathan Dimmock, a regular guest with the symphony, was master of the organ console. His first, quiet entrance, at the start of the slow movement (technically the second half of the first movement), startled with its reedy sound and gave the impression of being a little unprepared. Dimmock was fully prepared, though, for the giant crashing C-major chords that open the finale. Befitting de Waart’s conception, his was a dignified rather than thunderous performance: no Phantom of the Opera, he. The sound from the organ pipes towered over the orchestra without drowning it in the middle of the main floor where I sat.

Although the “Organ” Symphony carries the outline of a four-movement symphony, it lacks the details of sonata form and is built on thematic transformation in the style of a Liszt symphonic poem, as James M. Keller observed in his program note. It has a late-Romantic opulence that also derives from Liszt, and something of that aesthetic could be seen in the rest of the program..

The concert began with an overture — the Prelude to Act 1 of the opera Die Gezeichneten — by an early 20th-century Viennese, Franz Schreker. The most misnamed composer in all of classical music (schrecken in German means to frighten or terrify), Schreker, unlike some of his contemporaries, is utterly unfrightening. His Prelude is lush and slow — perfectly suited for de Waart — with chromatic harmonies reminiscent of Wagner or Strauss, plus a hint of Holst’s “Neptune” in the prominent celesta part, with a short, faster, and crunchier Lisztian section in the middle.

Simon Trpčeski was soloist in the Piano Concerto No. 4 by Rachmaninov, perhaps the least-known of the composer’s concerted works. While Rachmaninov was always an opulent late-Romantic, this is in his leaner, tougher late style. Trpčeski eschewed the key-banging and high emotionalism he’s used in other concertos in favor of contemplation. The heavy two-handed chords of the first movement’s opening theme, a bravura display in earlier Rachmaninov works, came out stately, almost muffled. The dazzling piano work in the finale glistened lightly, and Trpčeski took advantage of a fermata in a solo passage to stop and figuratively look around. The orchestration in the outer movements is more chittery than in other Rachmaninov concertos; de Waart smoothed this out as much as possible.

The orchestra under de Waart’s baton gave out the theme with a tragic, almost hypnotic intensity.

The highlight of this performance, as of the Saint-Saëns, was the slow movement. Repetitions of a somber motive in the string-dominated orchestra alternate with elaborations on it in the unaccompanied piano. Trpčeski’s contemplation was at its height here as he softly and gently worked through these variations. The orchestra under de Waart’s baton gave out the theme with a tragic, almost hypnotic intensity. It was a beautiful sequence to persuade listeners that this concerto should not be so little known.

For an encore, Trpčeski gave us a special treat. He convinced SFS Concertmaster Alexander Barantschik to join him in a lively, somewhat primitivist piece called Dancing Fantasy, by an accordionist named Kočo Petrovski, arranged for violin and piano by Damir Imeri. (This was a small patriotic salute by Trpčeski, as both composer and arranger are, like him, natives of the Republic of Macedonia.) De Waart sat on the organ bench to watch as this attractive little thing went on.