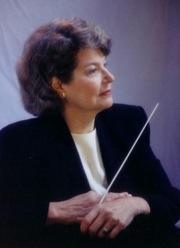 Rhythm in the Redwoods

The symphony, one of two that Glass composed based on themes from experimental rock albums by David Bowie with Brian Eno, was the largest work on the program and the evening’s highlight. Glass composed it in 1996 as music for a ballet by Twyla Tharp. More than Glass’ other symphonies, even the other Bowie/Eno collaboration, it has the harmonic stability typical of ballet music. Each of its six medium-length movements sits on a stable platform, without the push of harmonic change that’s usually the defining characteristic of symphonies.

This makes it all the more vital for that push to come from the rhythm — the true source of dynamism in this symphony. Both here and in the other works on the program, Johnson-Hamilton proved to be masterful at pulling this dynamism out of the orchestra. Conducting with small, precise, choppy beats, she gave a take on the symphony more abrupt and jerky than in the recording conducted by Dennis Russell Davies. This came across as an interpretive choice rather than a failing, and indeed gave a searching urgency, particularly to the opening movement, not conveyed by Davies’ recording. The exotic thrum of the second movement, the climax rising out of languor in the fourth, and the general brightness of color (unusual for Glass, whose symphonies tend to be dark, even drab) were also particularly well-conveyed.

Glass constructs this music in a manner familiar to rock musicians, though one not unknown in earlier classical music. He lays down a complex repeating accompaniment (or, in rock terms, a rhythm track), and then over that he spins lyrical, drawn-out melodies, often in the violins. Tireless drive in the accompaniment is more important to him than unerring repeated accuracy, and that’s what we got here. Flubs and drop-outs now and then didn’t matter much, because the rhythm always remained on target.

Some of the long solos in the brass had glitches. The violins lost intonation on the more complex ostinato patterns. And, as sometimes happens to this orchestra at the end of a long, tiring work, the final climax threatened to break down in exhaustion. Luckily, such a meltdown was avoided. These were minor flaws. Overall, sound and intonation were rich and compelling. The energy, enthusiasm, and rhythmic precision of the players were a delight.

The same comment applies to Rimsky-Korsakov’s Capriccio Espagnol. This composer specialized in colorful Eastern exoticism, and on this occasion applied it to colorful Spain instead, which was equally exotic from a Russian perspective. Rimsky had visited a Spanish port once, some 20 years before composing this work, when he’d been an officer in the Russian navy. He took most of the melodies of the Capriccio from a book, however. (He wasn’t alone. Bizet found most of his best tunes for Carmen in a similar source.) Rimsky’s almost intolerably brilliant orchestration is the selling point of this work, and the Redwood Symphony sold it well. It sounded more like Glass’ “Heroes” than listeners might have expected. The orchestra kept the rhythmic integrity, and the music also breathed well, without the swallows and awkward stops the work has received in some performances.

Vaughan Williams’ Concerto Accademico was more problematic, though its virtues were the same as those of the other two works. Its rhythms were lively and vigorous, and some lyrical beauty was achieved in the slow movement. This helped compensate for the fact that the stringency of this neo-Bachian work — one not often performed (maybe the title puts people off, and in later years the composer preferred to call it just Violin Concerto in D Minor) — was beyond the command of both soloist Danny Coward, a member of the orchestra, and the small string section that accompanied him. Tone was almost constantly wobbly, and there was no sure foundation to stand on. At least I can say that they worked hard at it, and, through Johnson-Hamilton’s direction, they had formed a discernable conception of its concerto grosso character.

The Redwood Symphony, always an interesting ensemble, has impressed outside observers by tackling a complete cycle of the Mahler symphonies. The orchestra should really shock the musical establishment by embarking on a cycle of the symphonies of Philip Glass. This concert was a good start.