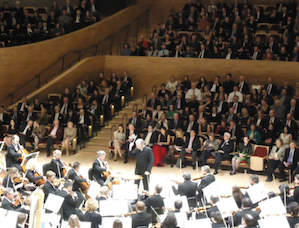 Ringing in the New Bing Hall

Stanford University’s new Bing Concert Hall received its first public outing with a gala opening night celebration on Friday, the first program on a crowded Stanford Live winter/spring schedule. The San Francisco Symphony, under Michael Tilson Thomas, came down and put in a guest appearance, with famed mezzo Frederica von Stade joining them for one item. The St. Lawrence String Quartet, Stanford’s resident chamber ensemble, and the Stanford Chamber Chorale, a student ensemble directed by Stephen M. Sano, the latter accompanied by members of the Stanford Symphony and Philharmonia Orchestras, rounded out the program.

Bing, as described in SFCV’s pre-opening feature, is a striking new building on the edge of the arboretum greenbelt separating the heart of campus from Palo Alto. A high glass-walled atrium surrounds the entire hall, giving concertgoers some room in the back to escape the crowd that fills the front during intermission, especially if, as on Friday, the staff is giving out glasses of champagne to toast the opening.

The hall inside is a jewel-box of wood paneling, laid out in the arresting “vineyard” in-the-round style familiar to visitors to the Disney Hall in Los Angeles. Much smaller than Disney, Bing carries 842 seats in a set of terraces surrounding the stage, expanding both higher and lower in elevation near the front. My seat was in the first row of the higher terrace, facing stage right, far enough away from the stage — though not very far, as no seat in the auditorium is more than 75 feet from where a conductor stands — to get a good overall view.

The diverse program gave an admirable opportunity to test out the hall’s acoustics under varying performing conditions. The St. Lawrence Quartet, which gave a cool and courtly performance of Haydn’s Quartet in F, Op. 77, No. 2, surprised me with the smallness and distance of its volume. The players, lonesome on a large stage with a huge open space above them, sounded further away than they looked. Yet the timbre was absolutely clear: supportive and pillowy, with a long reverberation, and so perfectly even and clean in texture that it forced inevitable thoughts of resemblance to a recording. (Hardly a fair comparison, of course. Recordings are supposed to sound like a good hall, not the other way around.)

Geoff Nuttall, playing first violin in this performance, moved his feet around while playing rather less than usual. Perhaps he was concerned about scuffing the stage’s soft, resonant cedar wood floor, or of making too much extraneous noise. Despite the intense pick-up of the acoustics, stage noise was not a problem, though audience noise, even footsteps in the aisles, could be loud enough to be distracting.

Yet the timbre was absolutely clear: supportive and pillowy, with a long reverberation, and so perfectly even and clean in texture that it forced inevitable thoughts of resemblance to a recording.

If this is what a chamber ensemble sounds like in Bing, how about a full symphony orchestra playing Debussy’s La mer — a delicate, rather orientalist performance — and John Adams’ manic Short Ride in a Fast Machine? The San Francisco Symphony’s sound was amazingly vivid, so much so that it could become too large. In many halls, if the volume of an orchestra overwhelms the space’s carrying capacity, the sound breaks up and goes fuzzy. This doesn’t happen at Bing. Instead, it remains piercingly clear, to the extent that treble instruments at full fortissimo become shrill, even painful for some listeners. Orchestras here may need to learn to modify their style on occasion. (Don’t look at the brass players, as a wit once said: It only encourages them.) Bass vibrations also came through clearly. What was weak, in relative terms, was the lower middle. There were places in the Debussy where an expected heft from the cellos buried in the mix seemed missing.

At anything other than full volume, however, the quality of the sound was wondrous. Just check out the quiet opening of La mer. The low throb of the harps and the distant roll of the timpani were vitally clear and distinct, mixed together with the muted bowed strings at just the right balance.

Beauty was also on display in Frederica von Stade’s rendition of “Take Care of This House,” an appropriately-titled song for opening a new hall, from Leonard Bernstein’s 1600 Pennsylvania Avenue. Her warm voice began gently, a little underneath the orchestra, and built up strength as the poignant song proceeded.

If the orchestra was Papa Bear and the string quartet was Mama Bear, the Stanford Chamber Chorale was Baby Bear: just right. There was true magic in the caressing effect that the acoustics gave to the 25-strong chorus as it sang Jonathan Berger’s specially-composed A Place of Concert, a lyrical setting of phrases from philanthropist Peter Bing’s remarks at the hall’s groundbreaking ceremony two and a half years ago. Smooth lines and held notes reverberated perfectly. The accompanying strings and English horn were more exposed. Student orchestras playing here will need to be on their toes regarding the technical quality of their work.

The hall’s all-round seating has the democratic intention of making the audience members aware of each others’ presence. Throughout the concert I could see the people sitting behind the performers, and I wondered, how is the music for them? The evening’s emcee, Anna Deavere Smith, conscientiously turned around often while giving her scripted blither, enabling all quarters of the hall to see her back. She had a body mike, though, so the sound was unaffected. Except to acknowledge applause, the other performers made no concession to the back seats. Yet audience members seated there told me afterwards that the Chamber Chorale had sounded just as fine from behind as from the front. If so, Bing is superior in that respect to Disney, where I have found that sitting behind singers is not artistically edifying.

At the “Sing the Bing” open house concert on Saturday afternoon, I was tentatively able to confirm this for myself. Though still seated in front, I was much closer to the stage and a bit to the side, and the vocal groups took advantage of the layout for some creative positioning of their singers. The sound still came across as remarkably even in balance, whatever direction the singers were facing, and as warmly as the Chamber Chorale had on Friday. So I guess that the acoustic sails that line the auditorium above the seats are doing their job. And I recommend the student group Stanford Talisman, which performed on Saturday, for its brilliant unaccompanied African and Afro-American vocal pieces, some of which were sung standing in a circle facing inward. I look forward to equally imaginative uses of this promising space in future performances as musicians explore its capacities.