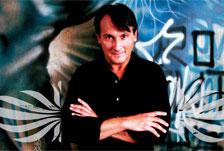 Jonathan Russell on January 29, 2008
What do a Stalin-era Russian composer and a contemporary British rock band have in common? That was the intriguing question posed by Christopher O’Riley in a piano recital last Wednesday at Stanford’s Dinkelspiel Auditorium in Palo Alto. Part of the Stanford Lively Arts series, the program consisted solely of preludes and fugues from the Op. 87 cycle by Shostakovich, and O’Riley’s solo piano arrangements of songs by Radiohead. It was a fascinating and thought-provoking juxtaposition that ultimately highlighted the differences between these artists more than their similarities. Inspired by J.S. Bach’s Well-Tempered Clavier, and by the brilliant playing of this work by the young Russian pianist Tatiana Nikolayeva, in 1950-1951 Shostakovich composed a set of 24 preludes and fugues, one in each major and minor key. For those acquainted primarily with Shostakovich’s better-known symphonies and chamber works, the preludes and fugues can come across as surprisingly austere and abstract, yet they can also be quite emotional in their own, understated way. Without exception, O’Riley performed his selections (seven of the preludes and fugues, numbers 18-24) with elegance and clarity, and also found his way into the emotional core of the works. The intricate counterpoint was always crystal clear, but the pieces never sounded pedantic (as they have sometimes sounded to me). Through a nuanced dynamic shift here or a subtle ritardando there, O’Riley imbued them with a wide range of delicate, tender, and often quite raw emotions.

Interspersed with the pieces were O’Riley’s arrangements of seven songs by Radiohead. After a few hits in the 1990s, Radiohead established itself as a distinctly creative band with the release of the album OK Computer, in 1997, and has followed the album with several more innovative albums, including Kid A, Amnesiac, Hail to the Thief, and In Rainbows. More than any rock band in recent memory, Radiohead has attracted fans from the jazz and classical worlds who admire its songs’ sophisticated and complex harmony, rhythm, counterpoint, and emotional content. As a result, several other musicians in addition to O’Riley have adapted and rearranged the group's works, most notably the jazz pianist Brad Mehldau, who has used the songs as taking-off points for elaborately freewheeling improvisations. Unfortunately, O’Riley’s arrangements were mostly disappointing. Much of the problem lay with their overly pianistic and technically demanding style, with near-constant, swirling arpeggios dominating the texture. The great strengths of Radiohead’s music are its surprising harmonic turns, its intricately layered contrapuntal lines, and, especially, the haunting beauty of its melodies. O’Riley’s excessively showy arrangements muddied the harmonies, buried the intricate counterpoint, and often nearly obliterated the melodies, turning the songs into a moody soup of virtuoso piano textures. The arrangement that worked the best, “Let Down" from OK Computer, was the one in which O’Riley stuck most closely to the original. The song has a repeating, minimalist riff in the guitar, and the pattern was clear nearly the entire way through in the pianist’s version. The bass line and melody could also be heard distinctly, and O’Riley saved his arpeggios for near the end of the song, successfully using them to build to a climax, before fading back down, and giving the song a compelling arc. He would do well to move his arrangements in the direction of clarity, rather than visceral intensity, and to avoid the virtuoso piano cliches that marred most of them. Like many musicians of my ’90s generation who have grown up surrounded by music of all styles and genres, I generally believe that good music is made in many genres, and that high quality popular music can compete on an equal footing with works by classical masters. Yet despite my admiration for Radiohead’s technical complexity and emotional depth, hearing their music next to Shostakovich’s forced unfortunate comparisons. The Shostakovich selections operated on a technical and emotional plane that was, by an order of magnitude, deeper and more complex. Both musics often have an air of desolation and alienation about them, but I couldn’t help feeling that the Radiohead songs were playacting at these emotions, while Shostakovich’s music was conveying the real thing. Despite these reservations, this was a program well worth hearing, and I admire O’Riley’s dedication to performing music he is passionate about, regardless of style, genre, or audience expectation. The juxtaposition was intriguing and far more stimulating and thought-provoking than the typical classical recital program of safely canonized masterpieces. And who knows, if pop and classical composers knew they might end up sharing the same concert programs, perhaps our pop composers would write deeper, more complex music. Maybe our classical composers would feel more compelled to write in a language understandable by the everyday public. And both genres just might gain in richness through mutual dialogue.

New, Old, and All Tantalizing

The Sixties Are Alive