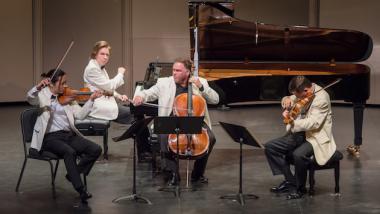 [email protected]’s survey of the history of the violin for this year’s chamber music festival has reached the 1820’s cusp between Classical and Romantic music. The concert on July 20 at the Stent Family Hall of the Menlo School in Atherton featured music by two Ludwigs for the price of one.

Ludwig Spohr (he also used the French form Louis, as occasionally did Beethoven) was a popular composer of his day who is slowly returning from subsequent obscurity. He was most renowned in his time for his double string quartets. This concert offered his No. 1 in D Minor, Op. 65. It features much more trading off and combining of parts, like a true octet, than the title implies. It sounds like Mendelssohn’s Octet in sonority and phrase work, not surprisingly as Mendelssohn is said to have been inspired by this work of similar richness and complexity.

The ensemble included the members of the Escher String Quartet, with Adam Barnett-Hart as the first violinist of the first quartet — the part Spohr would play himself, with the biggest solo displays — and the other three in the second quartet. While the players of the first quartet had more solos, the second quartet startled with the intensity of the sound of its unison rhythmic figures. All the players plunged through this long piece with energy and commitment.

Ludwig van Beethoven’s contribution was his Violin Sonata No. 10 in G Major, Op. 96. Arnaud Sussmann on violin and festival co-director Wu Han at piano gave a vividly etched performance of a piece whose smaller ensemble could have caused it to dwindle in significance next to Spohr’s big and beefy work. Sussmann gave a tangy flavor to the many double-stops in the work, and the slightest insistence on repeated notes and phrases added urgency, rising into dramatic fury near the end. Wu Han displayed a variety of tone color, especially when gentle Chopin-esque chords in the treble competed with rumblings in the bass.

Even these pieces, however, were overshadowed when Felix Mendelssohn’s Piano Quartet No. 3 in B Minor, Op. 3, erupted. Mendelssohn’s early piano quartets tend to be ignored in favor of his mature piano trios, and often don’t sound very interesting. This performance was more than interesting: it was passionate and intense. B minor is a key that invites dark and vehement music, demonstrated here with eerie string combinations from violinist Sean Lee, violist Roberto Díaz, and cellist Keith Robinson over chattering piano from Juho Pohjonen. This was the outstanding performance from the three Menlo evening concerts I’ve heard thus far this year.

The concert was filled out with two unaccompanied caprices by famous violinists of the period who were not Niccolò Paganini (who got a concert all to himself from Sean Lee the next day). Lee gave a chipper and dug-in performance of the Bach-like Caprice in C Minor, Op. 9, No. 3, by Ferdinand David, Mendelssohn’s concertmaster at the Leipzig Gewandhaus, and Sussmann offered the shorter and simpler Caprice No. 3 in G by Pierre Rode, who had premiered Beethoven’s Op. 96 sonata, not entirely to the composer’s satisfaction.

The day was filled out with a noon master class. Pianist Gilbert Kalish, describing himself as the oldest performer at the festival, tutored some of the youngest, 10-to-18-year-olds from the Young Performers Program. He got through three groups in a 75-minute session, instructing a four-hand piano duo in ensemble and a piano-and-strings quintet in dynamic balance. Upon hearing all the excellent playing, Kalish remarked, “It’s hard to be concerned about the future of music.”

The “Classical Style” concert focuses on chamber masterworks from Haydn, Mozart, and Beethoven.