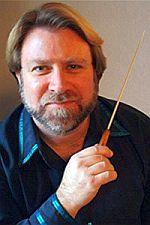 Rustling Among the Redwoods

Eric Kujawsky, music director of the Redwood Symphony, likes sometimes to lead his volunteer musicians into the thorny thickets of Eastern European modernism. This time, on Saturday at the Cañada College Theatre in Redwood City, nobody got seriously lost.

Bartók’s Second Piano Concerto is not the one of his to play if you want to be ingratiating. (That would be the Third.) Although its structure is simple enough, the scoring is heavy, jagged, rhythmically complex — everything you expect from 1930s Bartók. The composer claimed he was trying to make the work relatively easy to play. It doesn’t sound easy, yet the Redwood Symphony was able to get through it with panache. Whether all the tumbling brass themes in the first movement and the galloping rhythms in the finale were played with complete accuracy or not, they all hung together and never descended into chaos. Best of all was the slow movement, where hushed, vibrato-less strings gave the right introduction to the long, quiet, unusually scored duet between the solo piano, played by Thomas Hansen, and the orchestra’s timpani, beaten with great confidence, care, and stamina by Lydia Derugin.

Concerto soloists are sometimes the Redwood Symphony’s weak link, not always being up to the challenges of the works they undertake. Hansen, a local pianist who teaches at the Crestmont Conservatory in San Mateo and Notre Dame de Namur University, was not like that. He dove into Bartók’s slamming chords with full vigor, and held back in delicacy when the score allowed him to. Although his playing style was crisp and clear, there was a jangling fuzziness about the sound, almost as if the Steinway’s frame was vibrating audibly as he performed.

To create such a coherent performance of this formidable masterpiece was a notable achievement. What’s too bad is that the concerto may be too formidable for an audience to fully appreciate a good performance of it when they hear one.

Having gotten through that, the orchestra then faced Shostakovich’s Tenth Symphony. It’s a broader, smoother work than the Bartók, and it’s also much more commonly played. Here the challenge was matching the many great performances that have come before. Kujawsky took the long Moderato opening movement, and the introduction to the finale, with slow broad strokes, letting the orchestra growl ominously. Redwood’s cellos and clarinets, in particular, have a good line in growling. Then the musicians leapt abruptly into the fast sections: a bit too abruptly, perhaps, for in the finale I missed a certain power and grandeur, yet it and the scherzo were firm and vehement enough to be satisfying.

All the playing was on top level for a community orchestra. Very little line or rhythm was lost, intonation stayed on the good side, nobody was conspicuously weak, and ensemble was excellent. The tentativeness of some of the solo turns could be defended as appropriate for the context, and many of the bolder ones were outstanding. Top marks this time to clarinetist Richard Steinberg, who found a bit of the jazz in Shostakovich, and to hornist Greg White. The entire horn section did well at avoiding flubs (the particular curse of horns everywhere) in two long, tough works.

One more small treat rounded out the program. If the Tenth Symphony is Shostakovich cautiously poking his head out after Stalin’s death in 1953 and looking around to see if the landscape is safe, then his Tahiti Trot of 1928 is the pre-Stalin Shostakovich, when he was young, carefree, and bounteously witty. This piece is the colorful orchestration of Vincent Youmans’ then-current hit song Tea for Two, which Shostakovich arranged in an hour on a bet. If the Redwood Symphony played it on a bet, then they won that bet handsomely.