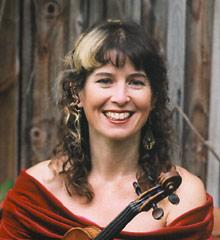 Chastain was also the nominal conductor, offering the orchestra a few gestures now and again, with SJCO Music Director Barbara Jay Turner keeping the ensemble going from the harpsichord at the back. These low-budget interpretations were lots of fun for those of us who have simple, low-minded tastes in Bach. Chastain is a heavy sawer of a violinist, with a dry, sometimes wobbly tone, who nevertheless gets good results through caressing the melodic lines and placing a strong emphasis on rhythm. She led the Andante of the A-Minor concerto, BWV 1041, as a cheerful, fast-paced bear dance, placing emphatic accents and the occasional elaborated arpeggio over an equally accented orchestral accompaniment.

For the D-Minor concerto for two violins, BWV 1043, Chastain was joined as co-soloist by SJCO Concertmaster Cynthia Baehr. A less emphatic player than Chastain, with a more tenderized tone, she meshed well with her partner. Tearing through the Largo scarcely a whit less quickly than in the outer movements, with the orchestra and harpsichord padding along tirelessly behind them, the soloists nicely balanced melody and rhythm to produce that rare state of suspended animation that characterizes the best minimalist concerts, where the listener feels as if the music has been going on eternally and is happy to have it continue eternally, too. It wasn’t a profound performance, nor was it subtle. I enjoyed it immensely.

In the second half, the full SJCO (the concertos had been played by a reduced orchestra), under Turner’s baton, played three works less than a century old, all inspired by Bach. Their inspirations varied from adapting Bach’s techniques to lifting his melodies.

The oldest of the three, Bachianas Brasilieras No. 9, by Heitor Villa-Lobos, dates from 1945. It’s a simple prelude and fugue for string orchestra, the prelude giving a notable solo part to violist Chad Kaltinger. The fugue is based on a rough-hewn subject, which was passed around with winning vigor and enthusiasm by everyone from the first violins down to the two double-basses, which struggled with the melody.

Imaginative Allusions to California and Bach

California Suite, by Gamaliel Galindo, was commissioned by SJCO and received its first performance at this concert. Turner said from the podium that it was composed earlier this year; unless Galindo is very fast indeed, I think she meant last year. Its six movements, named for dance forms used in Bach suites, are all quite short. The opening movements, in particular, are filled with the kind of dissonance that’s difficult to distinguish from wrong notes. I liked better the middle movements, with their more imaginative techniques: a sarabande with shimmering trills from the violins over melodic lines from the lower strings, and an air that was nearly pure pizzicato. Galindo makes his suite Bachian by borrowing musical forms and motivic fragments from the French Suites, and Californian by invoking popular songs referencing our state. These allusions are buried deep in the music and mixed thoroughly with Galindo’s own melodic material. He is not aiming at a glow-in-the-dark musical collage.

On the other hand, that’s exactly what Arvo Pärt created, in his straightforwardly titled Collage sur B-A-C-H. The reference in the last word is to the theme made by playing these notes in German notation. The Collage was not written by the holy minimalist composer known well today; this is early Pärt from his radical, pastiche-filled period in the 1960s. In the central movement, another sarabande, an oboe and harpsichord (Michael Adduci and Michael Touchi joined the orchestra for this) play short segments of straight Bach, each segment followed by the orchestra with piano lumberingly imitating it in shrieking dissonance. While Galindo’s dissonances sound almost accidental, it’s easy to tell that Pärt is being deliberate, and that he means serious business. He is setting up Bach, and then taking him down, with grim determination. Pärt’s outer movements, based on the more mathematical forms of the toccata and ricercar, are more mechanized and coolly objective, showing suggestive traces of the minimalist the composer would later become.