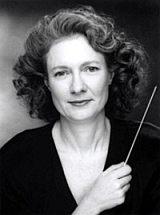 The San José Chamber Orchestra laid out a large potpourri of a concert for its 20th anniversary, celebrated on Sunday at Le Petit Trianon in San José. Two conductors, five soloists (including both of the conductors under each other’s baton), six works by as many different composers, four of those composers living and present in the hall, three of their works receiving first performances ... all this in one evening. The new works — and the older ones, too — were accessible and imaginative, and some were even witty.

The liveliest of the premieres was Trotsky’s Train, by David Avshalomov, a one-movement piano concerto in the form of a tone poem in the vividly pictorial story-telling tradition of Strauss’ Till Eulenspiegel. Avshalomov is a third-generation composer from a family of Russian émigrés who came to America via China. His plot, outlined in detail in the program notes, contrasts repressive Soviet rule with the spirit of the Russian people, each represented by appropriate pastiche music full of palpable symbolism. Avshalomov evokes Russian composers from Rimsky-Korsakov to Shostakovich, as well as all the composers of any nationality who have written musical trains. His railroad is as colorful as any other in music. Gwendolyn Mok as the pianist handled forcefully a huge, strong part, complete with a Rachmaninov-style cadenza and, earlier on, the role of the cacophonously pealing church bells in an Orthodox service scene, paired with Chad Kaltinger’s plaintively chanting viola.

Pneumatic Variations, by Pablo Furman, a local favorite who teaches at San José State University, is another one-movement concerto that received its first performance. It’s for accordion and piano, with string orchestra and harp. Mok was pianist again, and Anthony Quartuccio the accordionist, with Dan Levitan adding his harp. Furman was inspired by the bellows of the accordion to write something unusual-sounding, even for him. It was a tireless, perpetual-motion work of airy texture that shimmered and pulsated throughout its length, sounding to me mostly like Steve Reich, with some John Adams and a touch of György Ligeti mixed in. Mok was less prominent here; Quartuccio’s virtuosity on his large instrument was quite impressive.

Also on the premiere list was Breathin’ Walkin’ Dancin’, by Emily Wong, for a half-size string orchestra with oboe (Michael Adduci) and harpsichord (Barbara Day Turner). As the title suggests, this work begins slowly, with warm open harmonies typical of the American nationalist style, and picks up speed as it goes along, passing through a section with a maraca rhythm from the harpsichord, through a full-scale harpsichord cadenza, and ending vigorously in midair.

Wong’s music made a good introduction to the crisp, neoclassical Petite Symphonie Concertante, written in 1946 by the Swiss composer Frank Martin, which, despite its title, was the largest work on the program. Martin is a major talent rarely heard. Following in the tradition of a Baroque concerto grosso, this work is a conversation among two half-orchestras and three soloists: Turner on harpsichord, Mok on piano, and Levitan on harp. There’s a dry astringency to all these stringed instruments, which are variously plucked, struck, and bowed. Igor Stravinsky, Ernest Bloch, and Bohuslav Martinů, all of whom also lived in Switzerland at one point or another, are allied composers; Martin, though, has a distinctive voice of his own.

A few more items finished up the program. There were two movements from the immensely catchy Concerto for Harp, Strings, and Percussion by Craig Bohmler. Levitan, the soloist, had commissioned the work and gave its first performance with SJCO four years ago. Bohmler sets high arpeggios on the harp against deep, rich sounds in the orchestra, for excellent clarity and contrast. There was the Adagietto from Mahler’s Symphony No. 5, also for strings and harp, perhaps his only piece suitable for a chamber orchestra. And there was a demonstration of sonic iPhone apps, incarnating violin, piano, and ocarina, developed by the software firm Smule, the concert’s sponsor. A period-costumed Mozart narrated.

The orchestra sounded quite good, for the most part, in this adventurous repertoire. The violins were brittle and impassioned, and the lower strings very full-sounding for their numbers. Martin’s concluding march and Avshalomov’s final train ride (with the train rising up a mountain and disappearing from view — the music vanishes off into high notes — and then careering down the other side) were particularly energetic and brilliantly carried off. The players seemed keenly sensitive to Mahler’s fluctuating dynamics. Only in a few spots during the evening, particularly in the Avshalomov, did they seem at all out of their depth.

Turner, who founded the orchestra and has been its music director for all 20 years, was ubiquitous throughout the evening. She conducted all the pieces except the two in which she played harpsichord. These were led by Quartuccio, who is the orchestra’s assistant conductor, as well as an accordion virtuoso. With his help, and of course that of the dedicated musicians and all the composers they’ve commissioned to write works, Turner has built a little gem of a musical organization seeking both adventure and beauty.