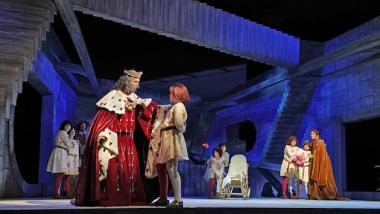 Santa Fe Opera has a long history of commissioning new operas, starting in 1957, the company’s first year, with Marvin David Levy’s The Tower. This season brought The Thirteenth Child, a fairy-tale opera by Danish composer Poul Ruders, with a libretto by Becky and David Starobin. Ruders is best-known in the U.S. for The Handmaid’s Tale, a dystopian opera based on Margaret Atwood’s novel, which the composer’s program biography tells us will be produced at San Francisco Opera in the near future.

The Thirteenth Child is based on “The Twelve Brothers,” a folktale collected by the Brothers Grimm, in which a king tells his queen that if their 13th child is a girl, the first 12, all boys, will be killed so that the girl will inherit the kingdom and all of its wealth. The queen tells the boys and sends them away for their own safety. Years later, the girl rescues her brothers, various complications ensue, and in the end, almost everyone — there’s a wicked mother in the mix — lives happily ever after.

This plot has plenty of potential, and, after all, the operatic repertory includes such fairy-tale or magic operas as Humperdinck’s Hansel und Gretel, Mozart’s The Magic Flute, and Jaromir Weinberger’s Schwanda the Bagpiper. Unfortunately, except for the excellent performances by all involved, The Thirteenth Child fails on nearly every level, starting with an exceptionally weak libretto.

The program indicates that Ruders went to Becky Starobin to ask for a scenario and libretto for the Grimm story, and ultimately David became involved as co-librettist. David Starobin is a guitarist who has commissioned hundreds of works from a wide range of composers; Becky Starobin, a violinist, is currently the president of Bridge Records, an important label started by the Starobins that has championed new and unusual music for nearly 40 years. Neither had previous experience as a librettist, and it shows.

Most notably, the libretto resulted in an opera with only 80 minutes of music, and it’s much too short to fully flesh out the characters or explore their motivations and behavior. The libretto exchanges the wicked mother for an old friend of the king’s, introducing unnecessary complications that are difficult to follow.

There are missed opportunities in the libretto, as well. If you have a children’s chorus of a dozen singers available, why wouldn’t you write a substantial number for them? The Starobins introduce a comic element in the form of a humorous chorus for the grown brothers — it’s the most memorable number in the opera — but also unnecessarily kill off the grown brother whom we come to know the best.

Ruders’s music for this libretto fails in a couple of different ways. It has little sense of overall structure or movement to and from climaxes. Much of the music sounded like punctuation rather than melody or accompaniment, and usually it was not clear why he’d chosen the particular sounds to punctuate the ongoing story. There are few instrumental solos. And there aren’t musical climaxes where you would expect them, either. This was particularly noticeable when Princess Lyra, the daughter, finally meets the first of her brothers, then the entire dozen: Inexplicably, nothing much happens musically at this long-overdue reunion. The most musically compelling sections of the score are the driving, minimalist-style prelude to Act II and a later interlude in the same style.

In sum, there’s little sense of either magic or mystery in the libretto or in the music. Without these elements, The Thirteenth Child is sadly prosaic.

Some of the blame can be laid at the feet of conductor Paul Daniel. I last heard him in 2004, and my review of his Valkyrie at the English National Opera included this: “... conductor Paul Daniel provided sluggish, dull, leadership and was unable to bring much shape or direction to the great opera; the evening only caught musical fire in the middle of Act III.” Not much has changed with Daniel since then, and it’s possible that The Thirteenth Child would have fared better with more focused and energetic leadership. More than once, I found myself wishing the conductor would goose the tempo or find other means to give the music more momentum.

Mercifully, Sante Fe Opera cast The Thirteenth Child with excellent singers, most of whom were new to me. David Leigh sang the King (and son Corbin, the eldest of the brothers) with an impressively firm and beautiful bass voice. Mezzo-soprano Tamara Mumford sang the Queen very beautifully. As the Princess, soprano Jessica E. Jones made a lovely impression. Tenor Bille Bruley was both funny and touching as Benjamin, the youngest of the grown brothers. Bass-baritone Bradley Garvin took some time to warm up as Droken, the opera’s bad guy.

Alexander Dodge’s scenic designs featured projections for castle and forest and not much beyond that; the crucial red lilies, which represent the family, were wholly, and presumably deliberately, unrealistic without being at all magical. Darko Tresnjak’s direction was efficient at best. Rita Ryack’s costume designs were stereotypically in the fairy-tale realm.

The rave is in: Mason Bates’s first opera is a (re)sounding success, one that deserves permanent repertory status.

Santa Fe Opera has another successful launch of a new work thanks to the work of composer Jennifer Higdon and librettist Gene Scheer.