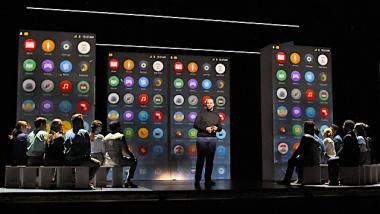 Exhilarating, moving, shocking, and enlightening in turn, Mason Bates and Mark Campbell’s new opera, The (R)evolution of Steve Jobs, premiered at Santa Fe Opera on Saturday night, July 22. Thanks to a dress rehearsal about which 100 instagramers had messaged away ecstatically until their fingers cramped, Santa Fe Opera had already added an extra performance even before the curtain rose.

You could feel the buzz as the excited audience congregated on a warm and lovely Santa Fe evening for the 90-minute, intermissionless event. Well before the opera brought the entire house to its feet as mezzo-soprano Sasha Cooke (as Jobs’s wife, Laurene Powell Jobs) floated her final words, “Only one,” on a cushion of radiant sound, it became clear that the coproduction is destined to sell out at the Indiana University Jacobs School of Music, Seattle Opera (2018–2019 season), and, finally, San Francisco Opera (2019–2020 season).

As I learned at a pre-performance panel, each contributor inspired the others and informed Bates’s writing. The triumph of The (R)evolution of Steve Jobs’s instantly likable music, in which acoustic and electronic instruments meld as one, lies in its wide emotional compass. The score swings between mechanical, extremely visceral passages and surprisingly touching, lyrical ones of timeless beauty. It carries a deeply human resonance, transcending the ever-increasing anonymity of our computer age. The opera’s music is infused with wows and wonder, but also with warmth and wisdom.

While images flashed seamlessly across six, frequently shifting, luminous panels and the backdrop, Campbell’s time-travel libretto took us to the Jobs’s garage in Los Altos in 1965. There, a 10-year old Steve Jobs (Jonah Sorenson), who loved to build and tinker, received a hand-built worktable from his father, Paul Jobs (baritone Kelly Markgraf), for his birthday.

From that sweet scene, we leapt to the adult Jobs’s (baritone Edward Parks) fabled 2007 iPhone introduction at the Moscone Convention Center in San Francisco. As one huge, seemingly unbounded image after the other swept/swiped across the screen, it became apparent that Jobs had introduced the paradigm shifting one device that “Does it all ... In one hand ... All you need ...”

What also became clear, as Jobs’s character unfolded in the subsequent, back-and-forth in time scenes, is that the mastermind of the i-Everything Age was having a difficult time with his health and finding compassion for himself and others. With the symptoms of his pancreatic cancer increasingly intruding on his emotions, he is strengthened by his Buddhist spiritual teacher, Köbun Chino Otogawa (bass Wei Wu), and his wife’s patience and love.

Campbell and Bates masterfully balanced the fast-moving, high energy scenes between Jobs, his initial partner-in-revolution Steve “Woz” Wozniak (tenor Garrett Sorenson), and a chorus of young Apple employees with slower, contemplative scenes between Jobs and Otogawa. Punctuating it all were the shocking, emotional encounters between Jobs and his rejected first love, Chrisann Brennan (high soprano Jessica E. Jones), and the happier, loving scenes with Laurene.

Cooke’s wide vocal range, flawless production, and cutting power contributed to a standout performance that was both earthy and warm. Not even the inevitable limitations of amplification, which in this case only minimally compromised the color of her voice, could detract from her accomplishment. Her ever-maturing artistry puts her in the company of such “sacred” mezzos as Kathleen Ferrier and Lorraine Hunt Lieberson, whose singing has a rare spiritual depth.

Given how much Bates demands of his artists, both Parks and Sorenson seemed a bit strained at the top of their wide ranges as they delineated their characters with convincing authority. Wei Wu was a delight, the deep resonance of his lowest tones matched by joy higher up. Jones’s vulnerable, fluttery soprano was equally ideal, creating a heartbreaking contrast with Parks’s unbreakable stance. Smaller roles, including Mariya Kaganskaya as the Teacher, were handled equally well.

It is often asked of contemporary opera, “Is the material deserving of a full operatic treatment? Does the music truly lift the action into a sphere that transcends what prose and theater can accomplish?” In the triumphant case of The (R)evolution of Steve Jobs, there can be no doubt on those counts: Campbell and Tsykun’s extremely visual narrative and Bates’s music reveals the conflicted energy from which spring words and events. A gripping and illuminating musical, dramatic, and visual achievement — one that transcends the divides of generations and genres — has just joined the operatic canon.

CORRECTION: This article originally reported the name of the performer of Young Steve Jobs as Asher Corbin. The role was actually performed by Jonah Sorenson, in a late casting change. We regret the error.

Mason Bates’ opera is designed to use both high-tech and traditional operatic ideas to enter the inner world of the mercurial co-founder of Apple, Inc.

This highly regarded composer of Neo-Americana opens the Cabrillo Festival with a transporting evocation of the Arizona desert.