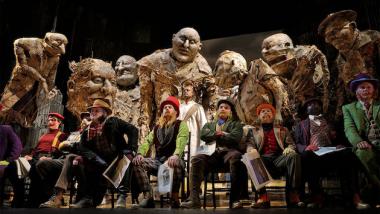 The subject of Philip Glass’s first “real” opera is the early legal and political life of Mohandas Karamchand Gandhi in South Africa between 1893–1914. As in Einstein on the Beach, his previous collaboration with director/designer Robert Wilson, Glass and his librettist, Constance de Jong, told the story in a way that portrayed the historical events in terms of the evolution of Gandhi’s philosophy of nonviolent resistance, satyagraha. Often translated as “truth force” or “love force,” the word is actually a composite attributed to Gandhi (based on a similar term coined his nephew Maganial Gandhi). The expression combines the Sanskrit words satya (truth) with agraha (holding firmly to).

On Saturday, Los Angeles Opera brought Satyagraha to the Dorothy Chandler Pavilion in a brilliant production originally conceived in 2007 for the English National Opera by the founders of Improbable Theatre, director Phelim McDermott and designer Julian Crouch. It was presented at the Metropolitan Opera in New York in 2012 and revived by ENO (for the third time) in February 2018.

It’s reasonable to assume that most of the audience that filled the Dorothy Chandler Pavilion arrived knowing the music of Philip Glass, at least on an abstract level. It’s also likely they imagined they were attending a contemporary opera, while in fact Satyagragha was composed 40 years ago, at the beginning of the Reagan era and the fall of the Soviet Union.

It was a time of revolutionary rethinking in the fields of contemporary classical music and theater. The emergence of Minimalism offered an alternative to European postwar modernism. Companies like The Living Theater, Mabou Mines (who often collaborated with Glass), and especially Robert Wilson were stressing abstraction over the literal, creating time-bending productions that often evolved incrementally over the course of hours.

McDermott’s production for ENO remained true to the essence of Glass’s original creation, favoring abstraction over any kind of “you are there” realism. Events like the creation of Gandhi’s Tolstoy Farm, the founding of the newspaper, Indian Opinion, as well as the confrontational protests over “The Black Act” (requiring Indians to register with the government) and the strike-producing “New Castle March” unfold in an abstracted vocabulary. It’s a style that is visually stunning, but may leave the viewer (at times) at a loss as to know who is who, and what is what? What is the significance of “the lady with the umbrella,” for example.

Akin to the theatrical magic of Julie Taymor (The Lion King), McDermott and Crouch create a world where an assortment of wicker baskets can morph into the mythic heroes of Lord Krishna (sung by Patrick Blackwell) and the warrior Prince Arjuna (Michael J. Hawk). Incorporating the most common materials, sheets of newspaper and strips of cellophane can come together to form amorphous beings, while a crowd of grotesque, monumentally scaled puppets loom over the action, representing the forces of government, capitalism, and racism that are focused against Gandhi and his followers— the Satyagrahi.

Satyagragha’s essentially unintelligible libretto is sung entirely in Sanskrit and drawn from the text of the Bhagavad Gita. To guide his audience through the opera Glass chose to project isolated phrases from the libretto. These quotations represent the moral actions and self-purification followers of Satyagraha must adopt if they are to attain the inner peace required for true nonviolent action.

There is, however, one time when Glass’s system really fails and should be overridden by the presenter. It comes at the very end of the opera. Saturday, Panikkar sang the final aria (one of Glass’s most beautiful melodies) standing before the elevated figure of Dr. Martin Luther King (representing the man to whom Gandhi’s torch will be passed)

I come into being age after age, he sang, and take visible shape and move a man with men for the protection of good, thrusting the evil back and setting virtue on her seat again. But there was no visible translation, leaving the audience totally unaware of the prophetic nature of the opera’s culmination, a message as significant in this era as it was when the 600 verses of the Bhagavad Gita were written.

Glass’s music, radical in 1980, now seems beautifully familiar. The successions of arpeggiated variations, alternations of tempi, and the diverse colors of the orchestration (for strings, winds and electronic organ) transpire like so many reflections that alter the emotional shading and impact of each scene.

McDermott’s staging movement is often painterly, moving in slow motion. The visual scheme is enhanced by the vibrant colors of Kevin Pollard’s costumes, the lighting by Paule Constable and the dexterity of the “Skills Ensemble” including puppeteers and stilt-walkers.

Panikkar’s performance as Gandhi is a pleasure vocally — he has brightly toned tenor — and visually a reflection of his Sri Lankan ancestry. Some may quibble that he is a bit tall for the part, but who cares? So Young Park (Miss Schlesin) is becoming a welcome mainstay of L.A. Opera performances. J’Nai Bridges brings a sense of stoic certainty to the role of Kasturbai..

At its heart, Satyagragha is a mantra-like, meditative reflection on the need for selflessness and transcendence in service to “the white fire of truth.” A rare quality to encounter in an opera, in harmony with its subject and as significant today as it has ever been.