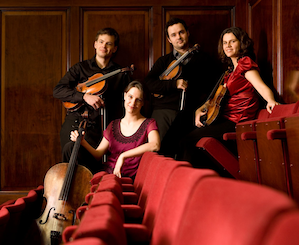 Schumann's Influence With Unity and Passion

San Francisco Performances’ mini-series “Schumann: Under the Influence” is billed as performed by “Jonathan Biss and friends,” for the pianist who appeared in all four programs. Friday’s concert at Herbst Theatre, the last in the series, however, would be better described as featuring the Elias String Quartet with Jonathan Biss, because that’s how the emphasis of the evening came out.

The repertoire fit the model of the other programs in the series: works by Schumann — in this case the String Quartet in A Minor, Op. 41, No. 1, and the Quartet for Piano and Strings in E-flat, Op. 47 — plus music by two other composers, one each earlier and later in date than he. That his two companions in this program should be the 17th-century Englishman Henry Purcell and the 28-year-old contemporary American Timothy Andres may seem a merely eccentric choice, yet as a way of showing influences it turned out to be crafty.

The program began with the Elias Quartet in three of Purcell’s four-part fantasias. Played in a plain, dry, antique style, with a near total absence of vibrato, they evoked the viol consort the works were originally composed for. The cool, restrained performances, with the passion flowing in a sublimated fashion underneath, turned out to fit the Elias collective personality emphatically well.

The Schumann string quartet that followed demonstrated this. The genius, or at least the cleverness, of preceding it with the Purcell became obvious at the start of the quartet, because it opens exactly the same way as a Purcell fantasia does: one instrument, in this case the first violin, playing a slow, studious melody solo, the others then joining in canonically. And the Elias played it almost as if it were a fourth fantasia. Only the slightest touch of vibrato, followed by some gentle waves of dynamic variation, at first betrayed the century and a half gap between the works. Gradually, as the music reached the Allegro, it took on more of the character of a 19th-century string quartet, yet the Elias approach was still relatively restricted and inward-looking, as if Purcell were still looking over Schumann’s shoulder.

The cool, restrained performances, with the passion flowing in a sublimated fashion underneath, turned out to fit the Elias collective personality emphatically well.

Something similar happened after Andres’ Piano Quintet in the second half, for which Biss joined the string players. In his program note, Andres explained that his inspiration from Schumann came in the work’s structure. He aimed to write something akin to a Schumann piano set, consisting of a cascade of multiple brief movements, each setting a single mood or tone. In the end, Andres’ work did not quite follow that model. It consisted of only five movements, each rather longer than the dozen or more of Schumann’s Kinderszenen or Carnaval. Yet the homage was clear in the composer’s mind, at least.

Not that the newly-commissioned Andres work, receiving its first performance here, sounded much like Schumann — or maybe it did. Andres’ idiom is neo-Romantic, though it’s a dry neo-Romanticism that’s experienced a lot of weathering in the close to two centuries since Schumann’s time. Frequently soft, stealthy, even plaintive, and a bit reminiscent of Shostakovich, it too turned out to be well-written for the Elias Quartet style. Biss, also, proved to be a covert performer, emitting notes staccato without dramatic emphasis.

So what happened when, afterwards, the musicians turned to Schumann’s Piano Quartet? Surprise, the Sostenuto assai slow introduction sounded as much like Andres — a quiet, almost secretive series of string chords with unobtrusive piano interjections — as the introduction to the string quartet had sounded like Purcell.

Once the Allegro was reached and the Piano Quartet proceeded on its merry way, it sounded more purely like itself. With only four players — Elias second violinist Donald Grant had to sit this one out — it gave greater play to individual voices than any of the other pieces did. There were more prominent solo passages, for one thing. Especially in the Andante cantabile, cellist Marie Bitlloch was forced to come out of hiding and play heartfelt and earnest lyric melodies. Most of the time she seemed much happier holding the bass line as unobtrusively as possible. Violist Martin Saving’s intensely dry tone gave much of the spicy flavor to Purcell and the Schumann string quartet, with Grant pursuing a similar line more moderately. Saving brought down his severity somewhat for the Andres and considerably more for the piano quartet. First violinist Sara Bitlloch, Marie’s sister, is most distinctive for a frequent tendency to slide notes. In the string quartet she would drop downward in pitch as if evoking some ancient harmonic tuning, another reminder that Purcell had come before.

As a group, the Elias Quartet seemed most unified when playing separately, with strong individual voices. Appropriate scoring meant that this is why the Schumann piano quartet was the most satisfying work on the program, and it’s also why Purcell’s polyphony sounded so good and why the Andres quintet, with its canonic chattering in the first movement and slow chordal phrases with brief fragments of inner-voice melodies emerging in the third movement, sat so well in these performers’ styles. In the Schumann string quartet, the players were at their best where Schumann is at his most contrapuntal. In the Mendelssohnian scherzo, the quartet was less of a unified machine than four individual voices going off in their four directions. They played unison chords as if startled by the noise they were making.

Biss’ unobtrusive pianism helped pull them together where unity was required. The piano quartet’s scherzo came off as a tight moto perpetuo. In the Andres, Biss’ bass rumbles in the second movement, motifs like finger exercises in the fourth, and a bit of jazzy overlaid melody in the finale were all well cast. Andres has the balance and idiom of a piano quintet down well, and it’s a pleasure to welcome his work to the repertoire.