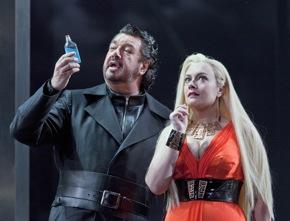 Out of the Ashes, a Goddess Emerges

Another perspective on Götterdämmerung from Jason Victor Serinus

The interpretation of “The Twilight of the Gods” as signifying the decline of capitalism and the industrial world is pretty much old hat, yet that aspect of the San Francisco Opera’s new production of Wagner’s Götterdämmerung didn’t and couldn’t distract from the consuming power of Sunday afternoon’s performance. The musical strength was that complete, given the singing and the magnificent orchestra, conducted by Donald Runnicles, in a glorious performance. Also, some imaginative touches in Francesca Zambello’s direction counted.

The top and the finish was the Brünnhilde for our time in Nina Stemme. Her vocal range and thrust is about equal to the emotional drive of her singing — a splendor whether in the rapture of her initial scene of separation from Siegfried through the rejection of her sister Waltraute’s pleas, or the terror and rage at her abduction, to the penultimate climax denouncing Siegfried as betrayer and the final Immolation scene. While her voice does not have the differently possessive qualities of Kirsten Flagstad or Birgit Nilsson (whom she resembles in making a short stature tall), it has the power and an extraordinary depth and is clad in a coruscating sheath that consistently excites.

That penultimate climax, the trio (untypical for Wagner) that closes Act 2, with Brünnhilde, the Hagen of Andrea Silvestrelli, and the Gunther of Gerd Grochowski, as they capped their plan with an oath to bring about Siegfried’s death, mounted in a mighty crescendo. It set up a momentum that carried through the following Act 3 to the end.

San Francisco Opera’s current Ring of the Nibelung has the luxury of offering no fewer than three heldentenors. In this one, the Siegfried is Ian Storey, British, making his debut with this company in this role. His voice has a ringing, penetrating quality, mollified by a slightly darkening, throaty quality. He sings a strong line, with conviction. The director, Francesca Zambello, guided him cleverly, in the charming demonstration of Siegfried’s innocence encountering, for the first time, a “sophisticated” environment and furnishings in the Gibichung hall; in his passionate reaction to Gutrune after being drugged; in his naive countering of the Rhinemaidens’ seductive ploys; and in his guileless relaying of his history during the fatal hunting party scene. He’s a real actor.

Zambello has another and original take on the Ring, most evident in this final “chapter,” and that’s not the obvious interpretation as the demise of modern civilization as we know it, with background projections of industrial skylines and wastes, images of pollution and desolation. Rather, it’s her insight that Wagner’s entire drama is woman-centered, driven by the wisdom and sensibility of women: Fricka, Erda, Brünnhilde, and the Norns, along with the accessory major victims — the Rhinemaidens, Sieglinde, Waltraute, and Gutrune.

First, the opening scene of the Norns has them not spinning a “golden rope” (goldenes Seil) but working a thick black electrical cable, a great pile of which is heaped upstage, a spider web of it projected behind and over the image of a giant electronic motherboard with moving elements (presumably recording and storing the Norns’ knowledge). The breaking of the “rope” and the end of their wisdom occurs with the rupture of the electrical connection, in a flash. The scene takes on a greater weight and is more convincing than in most productions. The grand, deep-voiced Ronnita Miller, the bright and vivid soprano of Daveda Karanas, the contrasting, focused grainier soprano of Heidi Melton all carried the scene persuasively.

The ending of Götterdämmerung, peopled only by women, was wholly original (if also problematic). The Gibichung women — not the men — came out to create Siegfried’s (and Brünnhilde’s) pyre, dumping trash bags filled with combustibles over the stage’s back “edge” while Gutrune (who does not commit suicide, as in most productions) waits in attendance on Brünnhilde. The three Rhinemaidens who have wheeled Siegfried’s body upstage on a cargo trailer and dumped it over the “edge” then busied themselves pouring “gasoline” from big petrol cans on him and the pyre. Instead of dragging Hagen into the Rhine as he makes his desperate last bid to seize the Ring, they overcome him downstage and, pulling a plastic bag over his head, asphyxiate him. Then Stemme sings the great Immolation farewell — the last and greatest of the final act’s moving moments. Taking a torch from a Rhinemaiden, she marches over the edge the women, and only the women watching. (Never mind that her torch blew out en route. They’ll fix it.) In an epilogue, a small boy in white appears from over the horizon, bearing a greening plant, a tender young ash tree that he plants at the stage apron: a New Beginning.

The problem was that, notwithstanding the glorious projected flames, the finale was far too functional, not pictorial nor grand enough for anything close to the epic’s climactic ending (which for Brünnhilde should have been triumphant; for the gods, cataclysmic). And the unceremonious treatment of Siegfried’s corpse was ugly. It wasn’t borne off on the Gibichungs’ shoulders during the glorious Funeral March but tossed around like slaughtered game and later literally dumped onto the pyre: unforgivable. A tacky streak keeps recurring like a leitmotiv, such as the automatic rifles carried by the Gibichung hunting party, even Siegfried. As for the men in camouflage suits, bearing automatic rifles for hunting? Great sports. If they’d been wearing NRA badges, that would have been a statement, and consistent.

The singers won out anyway. Silvestrelli, who sings the giant Fasolt in Das Rheingold, has a voice appropriately copious in all dimensions and as dark as villainy wants to be. As Hagen, he moves around like a soccer player trying to get away with sinister moves, or maybe like a manic tarantula. As Gunther, Hagen’s tool, Gerd Grochowski played well the duller of the brothers, deftly balancing the pose of pridefulness with deliberate “innocence,” his voice a fairly robust and rich dramatic baritone. Melissa Citro portrayed the sister Gutrune amusingly as an ingenuous/disingenuous and not very bright vamp, slinky in her floor-length gowns and pushed-up décolleté and waist-length blonde hair. She sang in a shiny, “silver-plated” sounding soprano voice with a shivery vibrato.

Daveda Karanas, as the fine second Norn, doubled as Waltraute, making the Valkyries’ visit to implore Brünnhilde to give up the Ring as gripping as it must be. The three Rhinemaidens, Stacey Tappan (the delightful Forest Bird in Siegfried), Lauren McNeese, and Renée Tatum, sported about, around, and even on Siegfried seductively and sang their delicious music suavely. Now terrestrial creatures, they are discovered at the opening of Act 3, cleaning up the polluted banks of the Rhine, amid discarded tires and other detritus, collecting yards of plastic bottles into their trash bags. One of them, seizing Siegfried’s rifle, mockingly holds it in front of her as a phallic display.

Director Zambello applied some delightful and entertaining touches. When departing from Brünnhilde in Act 1, Siegfried was still wearing his security blanket: the green scarf he inherited from his mother, Sieglinde (he apparently loses it during his fall from grace). At the opening of Act 2, Gutrune and her brother Hagen are discovered on an emperor-size bed watching TV (in the audience’s direction), the screen denoted by a projection of TV snow on the scrim between.

Jan Hartley’s and S. Katy Tucker’s projections, again a major element, merit an award. The flow and billowing of clouds is a recurrent interlude theme. There are the outlines of dark industrial structures, buildings, cracking towers, and the like. Siegfried’s “Rhine Journey” is taken via an overhead filmed depiction in black and white over a grim landscape, the environment ravaged, the bed of the Rhine desiccated. On his return trip to abduct Brünnhilde, accompanied by sinister music, the images are more somber, through narrow rock crevasses and canyons.

The orchestra, under Donald Runnicle’s masterful conducting of this dramatic symphony, deserves full praise. The orchestral melody shapes, structures, characterizes, drives, and carries this epic. It was finely integrated with the stage, making the singers part of the orchestra, which in turn was the acting force, the narrator. While the strings have the most difficult and consuming music, the winds (especially horns and brass) skate on the thinnest of ice: One blooped note, and the drama plunges into cold water. (There were none.) Thanks to the musicians, instrumental as well as vocal, the experience was of a complete work of art.