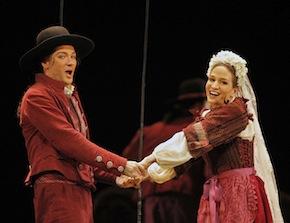 San Francisco Opera unveiled director Gabriele Lavia's new production of Mozart's Don Giovanni on Oct. 15. Dominated by 22 huge mirrors, which descended and ascended in various numbers and configurations according to a rationale known only to the director and set designer Alessandro Camera, the spare budget production was explained in Lavia's Director's Note thusly: "Don Giovanni is a myth in which, as in a hall of mirrors, the essence of man is reflected: his desperate thirst for knowledge, freedom, and absolute solitude. This idea of reflection was the inspiration for our scenic design ... Don Giovanni is a myth in which each of us is reflected as if in a 'game of mirrors,' calling to mind the symbolic image of human failure and solitude."

An intriguing idea, I suppose, but one that fell flat in the face of mirrors that, from many vantage points, rarely reflected anything other than blackness. Nor was the "absolute solitude" that Don Giovanni supposedly thirsts for anywhere in evidence in Nicola Luisotti's ultra fast paced first act. The Don must have been mighty desperate for a room of his own given that Mozart's magnificent music, although spiced with Luisotti's brilliant flashes of inspiration and oft-hilarious pianoforte commentary in recitatives, left few melodies with sufficient space to blossom and breathe.

At its worst, the pacing resembled a TV commercial that spurts from shot to shot to maintain interest. The warning signs arrived in the Overture, where rapid figures were repeated so fast as to resemble machine gun fire. Aria after aria followed with nary a hint of Mozartian elegance or grace. Even Don Ottavio’s “Dalla sua pace,” sung by Shawn Mathey with more strength than sweetness, emphasized trouble over peace. The results certainly underscored the libretto’s violence and brutality, but at what price?

Thankfully, tempi settled down to a customary and welcome pace in the second act. Here, Luisotti brought out deeper meanings by surprisingly slowing down passages in some arias rather than speeding up. Those who know the opera well were forever coaxed to the edge of their seats, wondering what would happen next.

Through the rush, which often pushed musicians and singers to their limits, the principals miraculously maintained beauty of tone. Lucas Meacham (Don Giovanni) sang forcefully, with a strong taste of vengeance in the voice. Saving his wonderful honeyed tone for his mandolin serenade and most seductive passages, he used his height and bulk to create an unremittingly mean master who shoved and threw people around and cared nothing for their hearts. His frequent use of a certain scarf also left me wondering if Director Lavia was actually attempting to portray a sadistic magician, trapped in a Hall of Mirrors, whose powers to mesmerize had irretrievably gone awry.

Marco Vinco (Leporello), in his U.S. debut, was Meacham’s foil in every respect; he mugged and grimaced constantly, moved like a stalked leopard, and never let anything be. I found him less amusing than exhausting. Once Mathey settled down and dropped his tendency to bob head and body up and down with his vocal line, more sweetness emerged. Handsome Ryan Kuster (Masetto) sang beautifully, and acted so convincingly that it was hard to believe he’s an Adler Fellow apprentice. In his SFO debut, the fine voice of Morris Robinson (The Commendatore) lacked the booming authority that generates soul-shaking profundity.

The women were outstanding. Ellie Dehn (Donna Anna) sang wonderfully, with tone more flowing than in her recent SFO Nozze di Figaro. Save for her final aria “Non mi dir,” where the cabaletta was sung at a slower than ideal pace, top notes lacked  volume, and the two highest came out flat, she acquitted herself nobly. In her San Francisco Opera debut, Serena Farnocchia (Donna Elvira) sang superbly, expressing fury, confusion, and obsession in equal measure. Her Elvira wasn’t hysterical in the Schwarzkopf manner, but she was certainly in desperate need of therapeutic intervention. Brava!

SFO debutante Kate Lindsey (Zerlina) was one strong cookie; initially replacing fragility with determination, she eventually succumbed to the sexually obsessed Giovanni’s power to prey upon the most uncontrollable aspects of his victims’ blind love addiction. Given Lindsey's strength, and Luisotti’s rapid tempo, her “Batti, Batti” almost seemed as if she was beating Masetto rather than pleading for understanding.

Shorn of its moralistic epilogue, the opera ended with the Don's descent into hell. Curiously, it was also the brightest scene in a production in which costumer Andrea Viotti turned the metaphorical mirrors the other way by dressing Don Giovanni in black and the ordinary folk in royal burgundy. His outfits for the trio in the masked ball were a high point, matched by Lavia’s hilarious choreography of the excellent SFO chorus in “Batti, Batti.”

This is one risky, forever on-the edge Don Giovanni. Whether Luisotti’s almost obsessive probing and frequent revelations will leave you more inspired and thrilled than frustrated and perplexed has yet to be determined. Little is as black-and-white as it seems.